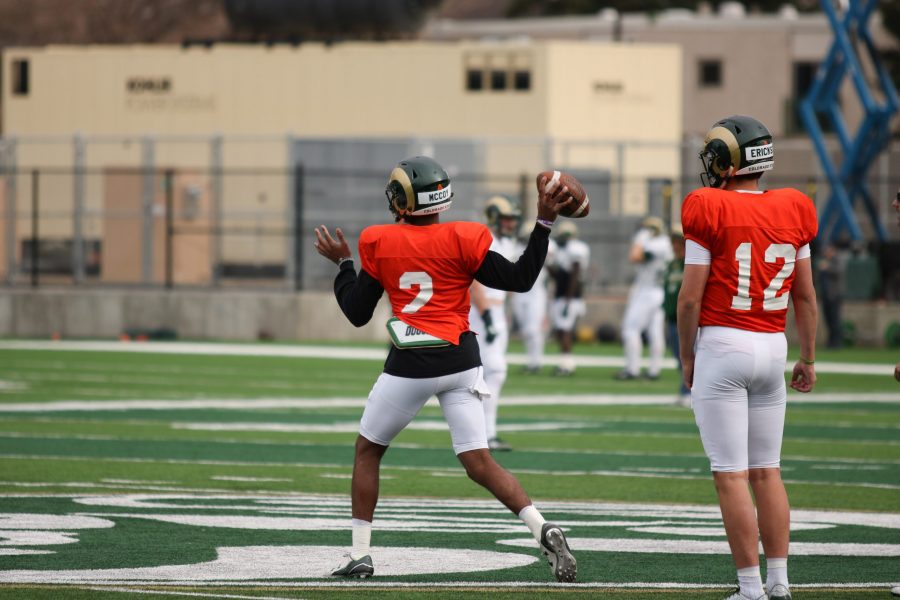 With one week remaining in spring football, Colorado State completed its second scrimmage session of practices Sunday afternoon. In what was more of an abbreviated scrimmage than last week’s, the offense showed improvements during a competitive session while the defense remained steady.

The scrimmage period of the practice consisted of drives starting from the 25-yard line, red-zone scoring opportunities, two-point plays and a one-minute situation. Stats were not kept on the day, but coach Mike Bobo saw improvement from the first scrimmage.

“I thought it was a pretty good day, there was better execution by the offense,” Bobo said. “There were zero turnovers, had a couple explosive plays. The one-defense did a really good job after the first series.”

The first-team offense started the first drive with a long pass to Preston Williams that eventually led to a score. The second-team defense halted the twos on offense on consecutive possessions to end the first set of drives.

In the red-zone scenarios, the success flipped as the first-team offense was held to two field goals while the second-teamers converted two touchdowns.

During the one-minute drill, the first- and second-teams each had one opportunity. After allowing the one-offense to drive into field goal range, Tre Thomas blocked the field goal opportunity to halt the drive. The two-defense also stopped the offense on its one-minute drill. In the final scenario of the day, the defense stopped both two-point plays.

An area of concern from last week, Bobo thought the quarterback play improved Sunday. Justice McCoy ran with the first-team offense while J.C. Robles handled work with the second-team. During the first scrimmage, McCoy completed 10-of-18 passes for 146 yards and a touchdown. Robles struggled, completing 4-of-11 passes and throwing two interceptions.

Though stats were not kept, Bobo was pleased with the play from both signal callers.

“I thought Justice did a nice job when he was in there, drove the team down and had a couple nice completions. He had one missed assignment on one RPO I can remember,” Bobo said. “J.C. made a couple nice passes in red-zone work with the twos for touchdowns.”

That said, Bobo is still looking for a quarterback to separate himself. While the play improved, he recognizes there’s still big leaps to be made.

The Rams will practice on Wednesday and Friday before concluding spring football with the Green and Gold game in the on-campus stadium on Saturday at 12 p.m.