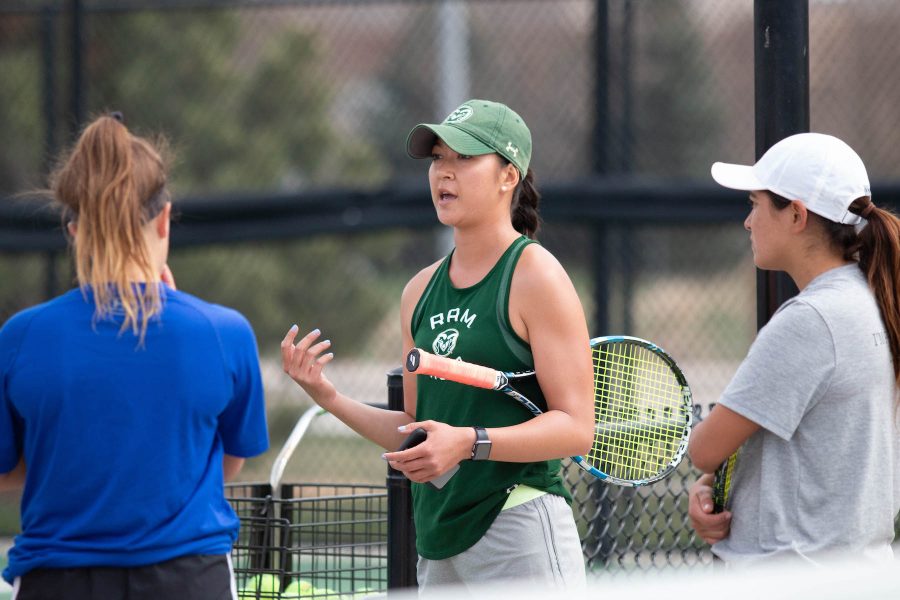 In a male-dominated career field, Erica Medlin has broken down barriers and currently sits as the first female to be hired as a coach for the women’s tennis team at Colorado State University. She is a full-time, paid assistant coach for a Rams team in the midst of its best season in over a decade.

A love for the sport and a family tradition to uphold prompted Medlin to begin her tennis journey. Born in Hawaii and raised in Arizona, Medlin adapted to new surroundings quickly, relying on tennis as a backbone in her development as a young woman. At the age of 8, Medlin decided to dedicate more time and effort into the game of tennis. A drive to play at the collegiate level pushed Medlin to devote more time into practice, propelling her through high school athletics.

“I knew that I wasn’t good enough to be a pro, so the next step was college,” Medlin said. “I wanted to go get a degree and be a part of a team.”

Medlin’s grit and work ethic led to her success as a collegiate player, with the inner workings of becoming a coach steadily accumulating.

Medlin played tennis for two years at San Jose State University then transferred to Northern Iowa for her last two years of eligibility. To top off her tennis career, Medlin was name Missouri Valley Conference Player of the Year as a senior in 2015.

Her experience, however, was not as glamorous as she expected.

“It was definitely a learning experience. I wouldn’t say I had the typical dream of what you expect in college athletics,” Medlin said. “I went through five coaches and I was a transfer, but I learned a lot about myself and I competed my butt off. I reached some goals I never thought possible and I got to do all of that playing a sport I love and grew up with.”

An abundance of coaches and change in scenery once again forced Medlin to rely on the backbone of her first love while simultaneously sparking more interest in taking on the role of a leader. A passion for a new turn of leadership ignited the journey she seemed destined to embark on.

Upon graduating, Medlin followed her instincts and continued along a path that had been familiar her whole life.

“I knew I still liked tennis and I knew I wanted to do something where I could be active,” Medlin said.

Despite fears of confidence in the field and a questionable ability to surpass male counterparts, Medline dove head first into a graduate assistant position at Northern Arizona University while receiving her second degree.

Working up the ranks of coaching is difficult for a man, and can seem impossible for a woman. With a slowly evolving society in the coaching community, females must perfect their coaching craft over many years in order to be considered as a hire over a plethora of male candidates.

Medlin’s fearlessness in her pursuit to the top sparked interest in the tennis coaching world.

After only a year as a graduate assistant at NAU, CSU head coach Jarod Camerota turned to Medlin over male prospects as a full-time assistant coach in the summer of 2016.

Medlin’s hire labeled her as CSU’s second-ever full-time assistant coach, another momentous victory for females in the athletic community.

During her first year as a coach, Medlin assisted leading the Rams to nine spring victories, the team’s most victories since 2011.

“A big setback for myself was the confidence of being in more a leadership position and becoming a role model,” Medlin said. “It is a male-dominated field and so being able to have the backbone to stand up to some of the male-dominated areas is awesome, and just letting them know that I can be just as much of a role model too.”

Being a trailblazer in the coaching  community comes with responsibility, but ultimately proves to be rewarding.

“It is a very inspiring job because I can help young women like myself in college,” Medlin added. “It’s a big deal that they are starting to bring on more paid female coaches.”

This season, Medlin has helped coach the Rams to 10 spring victories. With two more matches in the regular season, the Rams can achieve their best record since the 2004-05 season.

With continued success and domination by female coaches, one can hope to see a change in the next years for more females to take on leadership roles in athletics.

The door is wide open for those courageous enough like Medlin to take these big steps for women everywhere.