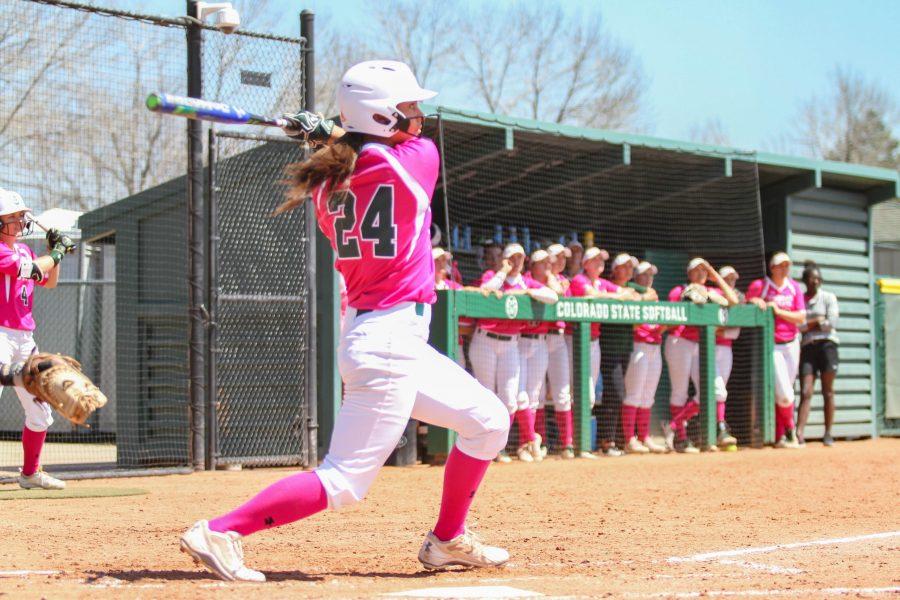 Junior Isabella Navarro hits during the game agaisnt San Jose State on April 22. The Rams beat the Spartans 10-3 after dropping the first two games of the series. (Ashley Potts | Collegian)

The Colorado State softball team (24-14, 8-7 Mountain West) squandered a chance to move up the conference ladder this weekend as it lost the series to San Jose State (27-15, 10-6 MW). In their effort to avoid the sweep, however, the Rams had one of their best performances of the season.

The team saw a wide range of outcomes in the series as Friday was a total blowout in favor of the Spartans, Saturday was a hard-fought loss and Sunday featured arguably the Rams’ best game of the season.

“After Friday we tried to tell the team that that was really just not us and you have to have a short memory in this game,” coach Jen Fisher said. “So we just tried to really wipe that slate clean.”

The Rams were run-ruled by the Spartans 20-4 after Bridgette Hutton gave up five runs in 2.1 innings, four of them coming on a grand slam home run in the third. Larisa Petakoff came on in relief after that, but the Spartans’ next batter hit another homer to make it 6-0 after three innings.

While the Rams were getting blanked through the first five innings, things continued to unravel on the mound as Petakoff quickly put runners on and Kaylynn Pierce couldn’t stop the bleeding as her own relief effort yielded twelve runs in the final two innings of the game.

“It was just too hard to stop the bleeding,” Fisher said. “This game tends to be contagious and we saw that.”

The next game went a little better for the Rams, but ultimately yielded the same result as Alison Petty and the Rams’ offense couldn’t overcome the Spartans in an 11-4 loss.

Petty and the Rams were able to weather a lack of control on the mound and consistent run production from the Spartans for the first four innings.

Against one of the conference’s strongest team, Petty battled and was managing the day like a quarterback who was just trying to keep it close in the fifth inning. After surrendering her fifth run in as many innings, though, the Rams’ offense stalled and couldn’t get any more runs after a Gamboa triple drove in two runs in the third.

The game was always in reach for a power-hitting Rams team until the seventh inning when Hutton couldn’t hold the Spartans in check. The Spartans came into the inning with a 7-4 lead, but earned two runs each off Hutton and Petty to put the game out of reach.

“I thought Alison pitched well,” Fisher said. “I liked what we did, but it’s a really good hitting team, they’re fighters and they’re at the top of the conference for a reason. They know the game well and they’re not going to roll over.”

After the coaches liked what they had to to see in game two, the Rams’ doubled down on Petty and the sophomore delivered with one of the best wins of her career in a game the team wanted badly. While pitching a complete game, Petty only gave up four hits in the 10-3 win.

“I don’t want to say they’re rude,” Petty said. “But just how they play the game is different from how we play the game. The way they played it the past two days and how they came out today, they came out cocky. I think that just made all of us want to beat them more.”

Gamboa continued her strong weekend and gave the Rams only their second lead of the series with a two-run homer in the bottom of the first. The 2-0 lead only got bigger as the Rams put runs up in every inning but the second.

“Our two losses were very hard,” Gamboa said. “But I think we used that as fuel today and it definitely worked.”

Amber Nelson went 4-for-4 with two RBIs on the day and Madison Kilcrease contributed two of her own to help push the game out of reach for the Rams. But the surprise contributor of the day was Isabella Navarro. Navarro got her first home run of the year after transferring from Trinidad State, where she was a major power hitter for the Trojans.

Gamboa, who has seen big hitting weekends become the norm, was happy to see Navarro and others come up big this series.

“I think the team believing in them is a huge thing,” Gamboa said. “Belief brings confidence and if we believe in them then they’ll have that confidence and do what they do best.”

The Rams will try to bring some of that belief to their matchup with San Diego State (14-28) from April 27-29 as they desperately need a series win or sweep to stay in contention for the Mountain West title.

Collegian sports reporter Mack Beaulieu can be reached at sports@collegian.com or on Twitter @Macknz_James