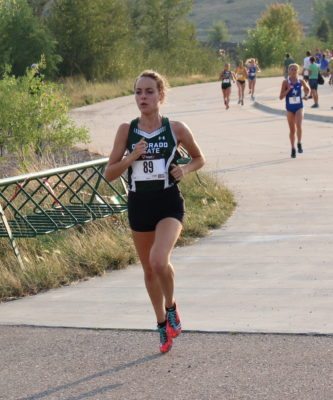 Colorado State continued its outdoor track & field season with a trip to sunny Stanford, California where distance runners competed at the Stanford Invitational.

Cole Rockhold continued his dominant junior year by setting a new personal best in the 5,000 meters with a time of 13:40.29. Rockhold’s time is a 12-second improvement from his previous record. He finished as the third collegian in the event and fourth overall. The highlight of Rockhold’s performance was moving up to second in the program’s record books for the event.

Joining Rockhold in the record books was redshirt senior Wayde Hall. The Oak Park, Minnesota native placed fourth in the third round of the 5,000 meters with a time of 14:05.61, a new personal best. Hall’s time earned him the ninth spot on CSU’s all-time outdoor list and is likely a qualifying time for the first round of the NCAA Championships. Carson Hume finished with a time of 14:14.84 for a 10th-place finish. Hume’s time earned him the 14th spot on CSU’s all-time list.

“I thought tonight we had some good things happen,” distance coach Art Siemers said in a statement. “Cole (Rockhold) did extremely well to run 13:40 and finished well in a strong field. That was a great step for him, especially in his first 5k of the year. Jerrell (Mock) and Grant (Fischer) ran very consistent to both break 29 minutes. They all took care of business to make the first round of NCAAs. Wayde (Hall) not only had a nice PR, but also had a time that normally goes to the first round of NCAAs. He ran a really smart race to try to win his heat.”

In the women’s 10,000 meters, Darby Gilfillan came within two seconds of setting a new personal best with her time of 34:15.46. Gilfillan finished 13th in the second section of the event despite losing one of her shoes with eight laps remaining.

Redshirt senior Sanne Holland finished 10th in the second section of the 3,000-meter-steeplechase with a time of 10:31.78. Holland’s time, despite not being a personal best, makes her the seventh Ram in program history to finish the steeplechase in less than 11 minutes.

“Darby lost a shoe with eight laps to go and stayed composed and still almost had a personal best,” Siemers said. “That was probably one of the toughest performances we had tonight, and she did a great job to qualify for the first round of Nationals. Sanne was a little bit off her PR, but she didn’t have the indoor or cross country seasons, so she had a while before she competed. I thought she did a great job to knock the rust off and run a strong opening steeple for the year.”

The Rams’ next stop is Boulder, Colorado where the team will compete at the Colorado Invite hosted by the University of Colorado. The meet is scheduled for April 8-7.