CSU men’s lacrosse loses heartbreaker in overtime to No. 2 Utah 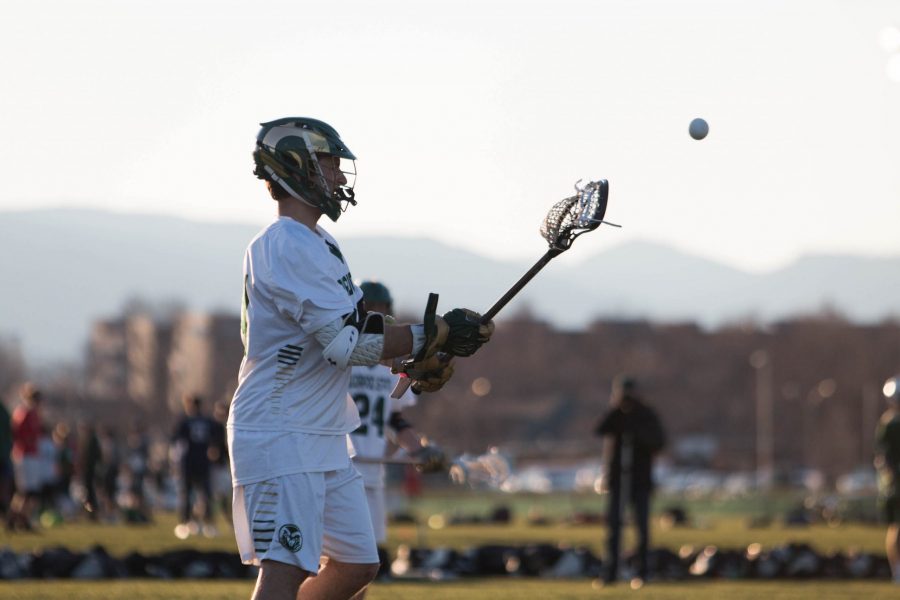 Senior AJ Stewart throws the ball during the second quarter. CSU lost to Cal Poly with a score of 9-7. (Julia Bailey | Collegian)

The Colorado State men’s club lacrosse team faced off against No. 2 Utah Thursday night in a game that resulted in a controversial, heartbreaking 12-11 loss in overtime. The Utes netted a shot that appeared to be taken after the buzzer, but the referees decided that the shot was taken before the end of regulation.

The Rams came out with energy and a sense of urgency. They played as if they had something to prove and it showed early. Freshman midfielder Josh Kelly got the party started as he found the back of the net and made the score 1-0 early.

The Utes finally got on the board with back-to-back goals with three minutes remaining in the first quarter to cut the deficit to one. Freshman attacker Pete Aplet tacked on another goal and made the score 4-2 Rams at the end of the first quarter.

As the second quarter began, the Utes struck first making the score 4-3 Rams. Senior attacker AJ Stewart got in on the action making the score 5-3 Rams. Kelly followed up with another goal widening the margin to three goals.

With a minute remaining in the second quarter, Stewart scored a flashy behind-the-back goal that sent the crowd into a frenzy. The Rams possessed all the momentum and a 7-4 lead going into halftime. However, the Utes came out of halftime and proved why they’re the No. 2 team in the nation.

Utah dominated the entire third quarter by shutting the Rams out and scoring five goals of their own. This completely stunned the Rams and quieted the crowd as CSU suddenly trailed by two going into the fourth quarter.

Kelly found the back of the net once again for his hat-trick that cut the lead to 9-8.

“It felt pretty good but I wish I could’ve done more to help the team,” Kelly said.

The Utes responded by making the score 10-8 with six minutes left in the game. Down two goals, Stewart completed his hat-trick and shortened the Rams’ deficit to 10-9 with his goal.

“I had good looks from teammates who were getting me open and I was finding the right spots and putting it in the back of the net,” Stewart said.

Remshardt tied the game with three minutes left in the game. With the crowd back into the game, Aplet gave the Rams an 11-10 lead with 1:30 remaining before a flash of lighting was seen in the sky.

The referees got together and decided to delay the game for safety purposes. After a 45-minute delay, the Rams did everything they could to eat up clock.

With under ten seconds to go, the Utes were on the attack trying to send the game into overtime. They took the shot and hit the back of the net making the game 11-11. However, this sparked a lot of controversy among the fans, coaches and players in green and gold.

It appeared that the Utes didn’t get the shot off in time, but the referees saw it differently. This sent the game into overtime where the Rams would lose in heartbreaking fashion.

CSU may not have gotten the result it was looking for, but coach Ryan MacDonald loved the effort that his players displayed and is looking forward to their battle with BYU on Saturday.

“We were playing our own game and not buying into what they do…We were playing Rams lacrosse,” MacDonals said. “It was great to see the way they played for sure.”

The Rams take on BYU at home Saturday at 1 p.m. The game will take place on the Intramural fields at CSU.

Collegian sports reporter Junior Guerrero can be reached at sports@collegian.com and on Twitter @juniorg45.