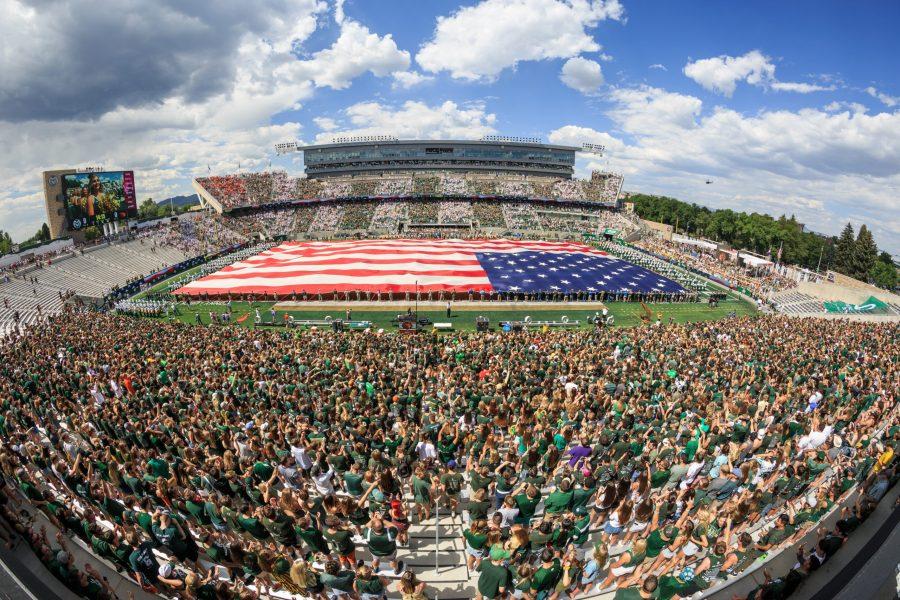 A packed stadium sings the national anthem before kickoff against Oregon State for the first game of the season. (Davis Bonner | Collegian)

After one year of football, Colorado State’s on-campus stadium finally has its partner.

The University and Public Service Credit Union announced a lucrative 15-year, $37.7 million agreement for naming rights to the stadium. An anonymous $20 million donation given in 2016 to name the field Sonny Lubick Field after the former head coach brings the total money raised for naming rights of the stadium to over $57 million.

The $225 million stadium is now home to one of the largest naming-rights deals in college athletics. USC and United Airlines partnered on a $69 million agreement while Washington and Alaska Airlines have a $41 million contract.

Though the partnership is official, the name to the stadium is still undecided. PSCU is in the midst of a rebranding, something it expects to complete by June. After the process, the official name, logo and color scheme will be unveiled for the stadium.

Athletic director Joe Parker credited Learfield Sports and its campus plus division for bringing the two sides together and advancing the conversation. As PSCU completes its rebranding, Parker said that the agreement exceeded all his expectations.

“This is the perfect fit, it surpasses every dimension that we have constructed for a partner,” Parker said. “As you’ve seen with the comments today, you just get a really strong sense of the chemistry and alignment between the two organizations.”

As the the vice president for community outreach at PSCU, Lubick’s relationship with both sides made it easier for communication to be had.

“The first time I met Sonny Lubick, I knew we had a person of personality, someone who is iconic to our campus,” Parker said. “It just seems like this ideal, perfect alignment that he’s been associated with the credit union for 10 years…You can’t discount the impacts that Sonny continues to have on this university.”

In addition to its comparison nationally, the contract well-exceeds the other five schools in the Mountain West who have a stadium partner. New Mexico’s 10-year, $10 million contract with Dreamstyle is the next-closest on a per-year basis in the conference. Boise State (15 years, $12.5 million with Albertsons) and San Jose State (15 years, $8.7 milion with Citizens Equity First Credit Union) also hold 15-year contracts for naming rights to their stadiums.

Parker and PSCU CEO Todd Marksberry both said they envision the partnership lasting longer than 15 years. With nearly 30 branches throughout the state, PSCU has served Colorado for 80 years and holds more than $2.3 billion worth of assets.

Collegian sports director Colin Barnard can be reached at sports@Collegian.com or on Twitter @ColinBarnard_.