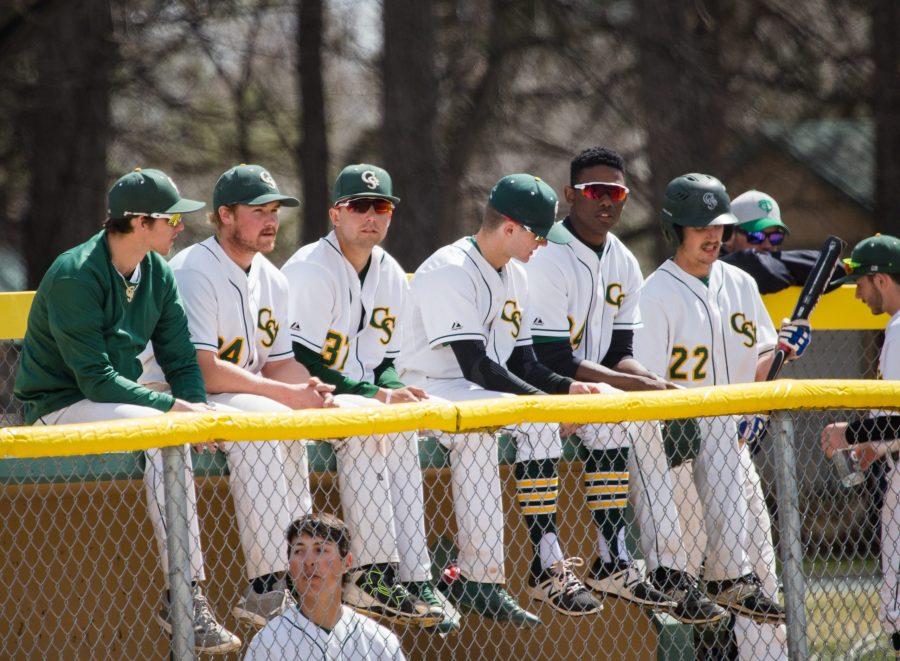 CSU baseball members watch the game in the dugout during the game on March 31. (Tony Villalobos May | Collegian)

The Colorado State club baseball team is getting hot at the right time as the Rams swept Colorado School of Mines in a three-game weekend series to build a nine-game winning streak.

In first game against Mines held at Double Angel Field in Parker, Colorado, the Rams were led by starting Pitcher Phelan Castellano. Castellano dominated the eight-inning game with a 14-2 victory. Lately, Castellano has been a hot-hand on the mound for the Rams.

“Ever since Arizona we have had really nothing to lose,” Castellano said. “You can sleep on us if you want, but we are still CSU baseball.”

“The pitching staff is a big part of our team and can often set the tone for the game,” said Van Vark. “Just trying to go out there and let my defense work so that we can get in the dugout and get the bats going is all I really try to do.”

The pitching staff has been exceptional during the Rams’ winning streak, leading to offense success. Castellano and Van Vark credit this year’s pitching staff for being the most talented they have been a part of.

“I thought we had a good pitching staff last year but I think this year is even more talented,” Van Vark said. “It is definitely loaded with guys who have been to regionals and nationals before and are hungry to get back.”

In the last game of the series, the pitching slowed down for the Rams; however, the offense stepped up and led the team to a 19-8 win and a clean sweep over Mines.

Castellano said the pitchers controlled the tone of the game this year, which hasn’t been the case in the past.

Van Vark knows that the pitching staff wants to allow as few runs as possible before the Rams’ offense gets going. Once the offense is firing, they are a difficult team to beat.

Throughout the season, CSU has relied on the word “fortitude.” This young Rams team has overcome many challenge thus far, but Castellano knows the work isn’t finished.

“We have to take it one game at a time and to play hard every play, every pitch,” Castellano said. “We cannot look over any opponent from here on out, but we have to continue to play our game, leading with fortitude.”

CSU will look to continue their winning streak on April 14-15 with a four-game conference series with the University of Northern Colorado at City Park Field in Fort Collins, Colorado.

As the season approaches an end, CSU controls their own fate from defending their Mid-America West Conference Title.

“Ever since our trip to Arizona we have been playing like we should be,” Van Vark said. “Our team is closer than ever, and we all have our sights on the same target.”