CSU baseball punches ticket to Regionals with sweep of CU 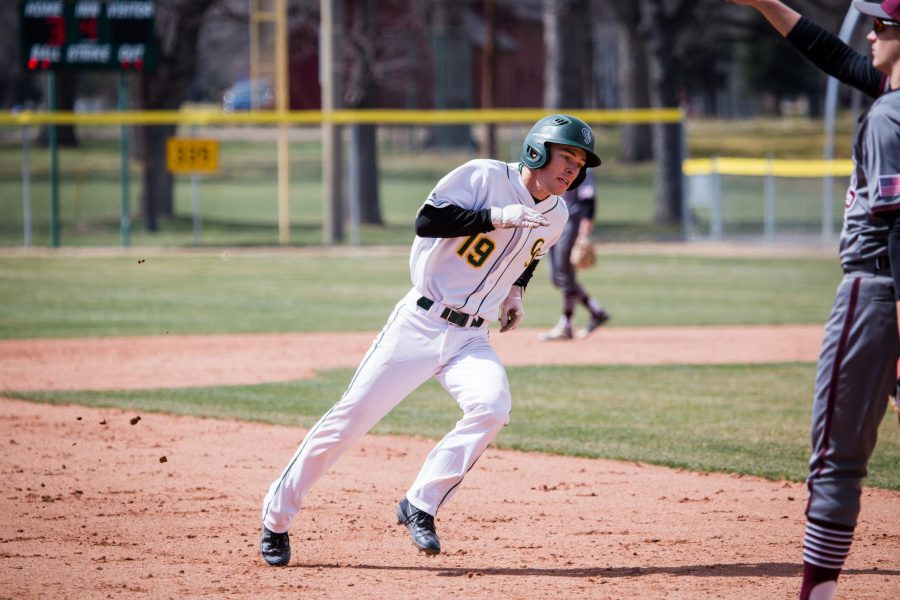 Ryan Schones (19) sprints towards third base during the game against Colorado Mesa University on March 31. (Tony VIllalobos May | Collegian)

Colorado State club baseball can start packing their bags for a trip to The National Club Baseball Association Regional Playoff.

The Rams punched their ticket to Kearney, Nebraska by sweeping The University of Colorado in a four-game weekend series held at City Park Field in Fort Collins, Colorado in what was a winner-take-all series to be crowned Mid-America West Conference Champion.

CSU won game one of the series 7-4, but game two was a different story. With their season on the line, the Buffaloes gave the Rams all they could handle. In the bottom of the seventh inning with the score tied at five, Ryan Schones hit a walk-off double to give the Rams the 6-5 win. More importantly, Schones’ walk-off ensured post-season play for the Rams and a conference title.

“It was a perfect situation,” said Schones. “He gave a good pitch to hit and I went for it.”

But Schones credits the coaching staff for the walk-off by taking the pressure off of him by giving him a hit and run situation.

With the series already clinched, both teams had nothing to play for on Sunday’s doubleheader besides overall record and pride.

In the fourth and final game of the series, CSU decided to give the younger players a chance to play in the rivalry-series. Senior pitcher, Brad Johnson, who is usually the team’s closer, started on the mound, but after a quick first out, Johnson was pulled by the coaching staff. As a sign of respect, the crowd and dugout gave Johnson a standing-ovation as he walked off the diamond.

On the next out, Senior catcher and Team President, Jake Walker, was next. Walker’s teammates and coaches fled the dugout to applaud the fourth-year player as he stepped off City Park Field for the final time of his illustrious career.

“It was definitely surreal; I didn’t think this time would come so soon,” said Walker. “I’m going to miss playing here.”

After all the hugs and emotions, CU scored two runs off CSU pitcher, Chase Nieslanik, to take the 2-0 lead.

In the bottom of the second inning, the young Rams brought the heat. Caleb Zietlow hit an RBI-single to bring in Ryker McDaniel. Shortly after, Gage O’Neil brought in three runs to give the Rams a 6-3 lead. To end the inning, Ben Alexander hit an RBI-single to send O’Neil home and take an early 7-3 lead.

Zietlow and O’Neil both continued their hitting success in the bottom of third inning with RBI-singles and a commanding 10-3 lead.

The Buffaloes managed to bring in multiple runs throughout the game to stay within striking distance.

In the top of the seventh inning with a 12-8 lead, CSU kept Trent Weldon on the mound to close the game out. Unfortunately for the Rams, The Buffaloes lit up Weldon and brought in four runs to tie the game.

CU had all the momentum going into the bottom of the seventh inning. With one out, Weldon went up to bat after just blowing the four-run lead. In a storybook ending, Weldon sent one over the fence for the walk-off solo home run and the series sweep.

“I just came up looking, trying to get on, trying to get a hard hit and he gave me something I liked,” Weldon said. “It felt really good. I knew it right off the bat.”

With the series sweep, CSU improved their winning streak to 15 games.

“This series was really fun,” Weldon said. “They played us hard, we fought back and got the wins in tight situations…We are definitely ready for Regionals.”

The NCBA Regional Playoffs will take place on May 11-13; however, Walker and Schones notice some improvement the Rams can make before they head to Nebraska.

“We need to throw some more strikes. I think we’re walking too many guys, personally behind the plate we’re missing our spots too,” Walker said. “Those are easy fixes…you can always work on something.”

Schones wants to tighten up the defense and execute on the plate in important situations.

With a two-week delay before they head to Nebraska, the Rams assure the waiting game won’t impact the team in any way.

“You always kind of hear about something like that,” Schones said. “I think we will be ready.”