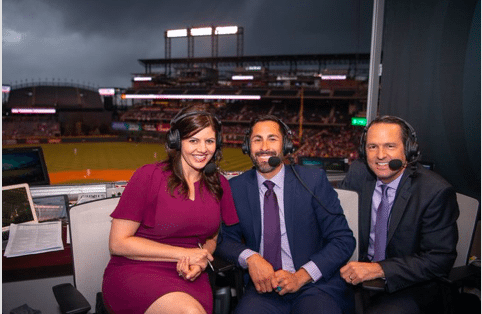 On Monday night, Colorado State and CTV alum Jenny Cavnar became only the third woman in history to do the play-by-play for a Major League Baseball broadcast. The moment was made even more special by the fact Cavnar had worked for the San Diego Padres, the Rockies’ opponent, before joining what is now AT&T Sports Net in 2012.

“It was exciting and nerve-racking at the same time,” Cavnar said. “I got the opportunity to cover a game in the spring and knew my chance was coming.”

In the first inning, Cavnar got a chance to share her own version of the home run call. When third baseman Nolan Arenado hit a line-drive shot to left field, Cavnar exclaimed, “Fire up the fountain!” The centerfield fountains are an in-stadium tradition at Coors Field to celebrate a home run. Cavnar explained the origins of her call.

“It started off as a tweet a couple days before the game,” Cavnar said. “We joked around in the office about it and I thought it would be a great time to use it.”

Women calling MLB games is a rarity that is becoming more common, but Cavnar joins a small group of women to work their way to the broadcast booth. She joins Gayle Gardner who was the first women to call game in 1993 when she called a Rockies game for the Cincinnati Reds broadcast. She stands alongside ESPN’s Jessica Mendoza as the only women in the booth so far this season as Mendoza does commentary for Sunday Night Baseball. Mendoza reached out to Cavnar on twitter and encouraged her to keep “doing her thing.”

Many have called Cavnar a pioneer for women in broadcasting, but she acknowledged that the work of all the women before her have given her the opportunities. She went on to say she is constantly inspired by all the women who work in sports broadcasting at all levels.

In her six years with the Rockies, Cavnar has held a variety of roles but has been the consistent host of the pre- and post-game show for several years, becoming a fan favorite. Her love of sports has stuck with her ever since her youth when she watched baseball with her dad.

Several MLB players also reached out to Cavnar via Twitter to congratulate her, including former Rockies outfielders Dexter Fowler and Ryan Spilborghs, the latter of which now works with Cavnar. Spilborghs joined Cavnar in the booth Monday and expressed the importance of the event.

During her time at CSU, Cavnar was part of the CTV staff and played on the women’s lacrosse team. She has said that CSU and Fort Collins will always hold a special place in her heart and she is excited about attending football games in the new on-campus stadium.

Collegian sports reporter Tyler Johnson can be reached at sports@collegian.com or on Twitter @TylerGjohnson20.