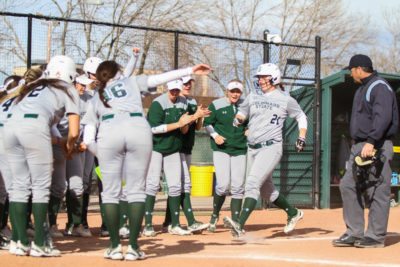 Junior Lauren Buchanan hits a home run during the game against Utah Valley on March 9. The Rams beat the Wolverines 5-3. (Ashley Potts | Collegian)

On its first publication, this article incorrectly spelled Alison Petty’s name with two L’s. It has since been corrected.

Coming off a Big 12 series win over the weekend, the Colorado State softball team continued its strong play on Tuesday, taking a dominating victory over the University of Northern Colorado Bears to sweep the season series.

Alison Petty battled through her fourth start of the season and the Rams quickly built up all the run support she’d need, as Lauren Buchanan and the rest of the Rams’ lineup came out on the offensive.

The Rams started off hot. Sarah Muzik led off the top of the first with a walk before Lauren Buchanan and Haley Donaldson hit back-to-back RBI doubles. One more run scored on a passed ball, to set up Petty with a 3-0 lead heading into the bottom half of the inning.

Petty had to fight in the first two innings as she put runners on second and third in the first and loaded the bases in the second, but ultimately escaped both innings unscathed. Buchanan added two more of her RBIs in the top half of the third before the Bears finally broke through for a run on Petty to make it 5-1 heading into the fourth.

Including Tuesday, Buchanan has eleven RBIs in her last four games.

“I don’t know (what’s got into her). I just hope she keeps it up,” coach Jen Fisher said. “No, but really, she’s just seeing the ball and executing extremely well.”

Buchanan was back at it in the fourth with a two-RBI double, giving her five RBIs on the day. She then came in to score on another Donaldson double, to make it 8-1 Rams. In the bottom half of the inning, Petty got out of trouble before it started, putting the bears down in order.

“She just keeps getting better,” Fisher said of Petty. “She keeps working through things, so we’re able to play her longer. We need to get her as many innings as we can, because she’s really coming along.”

The Rams scored yet another run in the top of the fifth, courtesy of Danni Klien, before Petty and the Rams got out of trouble one last time.

Petty walked the first two batters of the inning before Kaylynn Pierce came in for relief. After a single led to a runner being out at third, Pierce gave up another to load the bases with one out. However, the next two batters went down on groundouts. On the first, a fielder’s choice saved a run from scoring and ensured the game would end there in a 9-1, run-rule victory.

After having a few scoring droughts this season, the Rams will try to carry the momentum that has led them to 32 runs over the last four games into this weekend against the New Mexico Lobos.

“We’ve got to continue being tough outs, even if we’re behind in the count or with two outs,” Fisher said. “We’re starting to see that and we really need to continue it.”

Collegian sports reporter Mack Beaulieu can be reached at sports@collegian.com or on Twitter @Macknz_James.