CSU drops series against San Diego State, fails to move up in standings 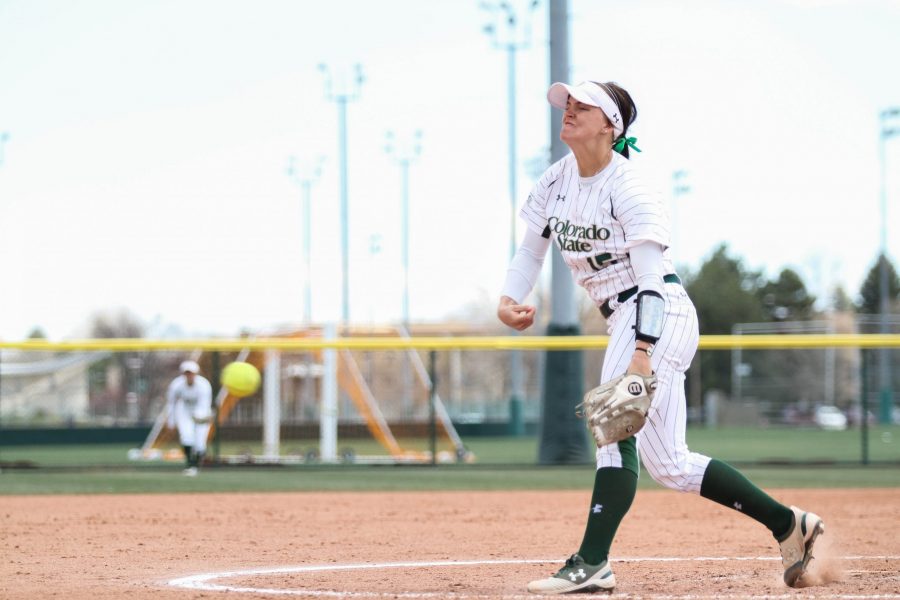 Senior Kaylynn Pierce pitches during the Rams third game against the University of New Mexico on Sunday, April 8. The Rams beat the Lobos 12-4. (Ashley Potts | Collegian)

The Colorado State Rams’ softball team (25-16) lost their weekend series with San Diego State (16-29) due to struggles on offense, missing the chance for a clean sweep to help their Mountain West standing. The loss came on a weekend when one of the three teams in front of them was guaranteed a series loss.

Aside from a rough first inning in game two, the Rams pitched well, but never garnered much run support against an Aztecs’ staff that has carried their team to what few wins they have this year. Haley Donaldson and Amber Nelson helped key the little offense the Rams did have for the weekend.

“They really pitched well against us,” coach Jen Fisher said. “They really kept us off balance and we hit some balls hard, but it really went both ways.”

Bridgette Hutton kicked off the weekend with her third complete-game shutout of the season. The days’ struggles were minor for Hutton as she only allowed five hits and did not let a runner past second after getting out of the second and third inning with a runner on third.

Sarah Muzik went 2-for-3 at the plate in the game and set the table for the Rams’ three-run first inning, a frame that would end up accounting for all of the day’s runs. After Muzik and Lauren Buchanan got on with singles, Donaldson drove in the speedy leadoff hitter on a double and Nelson followed an out by Corina Gamboa with a two-run triple. It was the start of a weekend where Donaldson had clutch RBI’s in every game.

“She’s so steady,” Fisher said. “She plays the same all the time, which is really a luxury. She has a tremendous mental approach and she comes to play every single day. I can always count on her to be the same… she’s been a really strong force in the middle of our line-up.”

From that point forward it was a pitchers duel, and Hutton’s three-run lead would prove to be the difference in the 3-0 win. It was just another day in the Mountain West this season, as the conference’s pitching has been strong all around.

“Across the board, every team has a couple of really solid pitchers,” Fisher said. “There are some young pitchers doing really well, so I think the pitching is probably, for my time in the Mountain West, the most evenly balanced that I’ve seen it.”

The following day was much like the first, but with a different result for the Rams.

The Aztecs came out early on Saturday, with more power than the Rams did the day before. Six of the game’s eight runs came in the first inning. It looked like the Rams were off to a hot start with a run in the top of the first, but they only scored one more run in the game, failing to make up for the Aztecs’ five-run first.

Alison Petty had a disappointing start, coming off strong outings last week, as she allowed five runs in one inning to the worst hitting team in the Mountain West.

“Sometimes a team just matches up well with a kid,” Fisher said. “It was interesting for Petty to be really good against San Jose’s hitters and I don’t think she looked a whole lot different. It was just the make-up of their team for that inning or so.”

Kaylynn Pierce took over for the Rams after the first and put on a strong relief performance, allowing one run in five innings of work, but the Rams only got one more run in the 6-2 loss. Madison Kilcrease was the only Rams player to record a hit after Donaldson’s RBI in the first.

“We do have the luxury of having, basically, two number two’s,” Fisher said. “So we weren’t going to leave Pierce on the bench in that situation, because she had a really solid week of practice and was looking good.”

Hutton was back on the mound for game three to start another strong game against the Aztecs. Hutton and the Rams needed every bit as the Aztecs’ pitchers were strong once again.

The Rams got on the board early with a run in the second off the bat of Nelson, who drove in Gamboa. The Rams could not extend their lead, though. In the fifth, the Aztecs broke through on Hutton thanks to multiple singles and a throwing error. The Rams came right back in the top of the sixth as Donaldson drove in another huge run, but the lead vanished again in the bottom half, as the Aztecs countered once again.

From there, Hutton and the Aztecs’ Alex Formby dueled into extra innings. In the top of the tenth, Hutton could not hold out any longer as the Aztecs ended the game on a walk-off home run to make it 3-2.

The second loss was a huge blow to the Rams’ aspirations of winning the Mountain West this year as they could have moved to just two games behind the league leader with a sweep. The Rams will have to hope for a very strong finish to the season and other teams falling off, if they are to climb the ladder.

“My main message was it’s going to hurt, if you didn’t care so much, it wouldn’t hurt,” Fisher said. “It’s much better than the alternative… I think you have to live in that hurt for a minute and then take the good things we did and move on.”

The Rams will get the chance this weekend to take on one of the teams in front of them, with Boise State University (34-14) coming to Rams’ field for a three-game series.

Collegian sports reporter Mack Beaulieu can be reached at sports@collegian.com or on twitter @Macknz_James