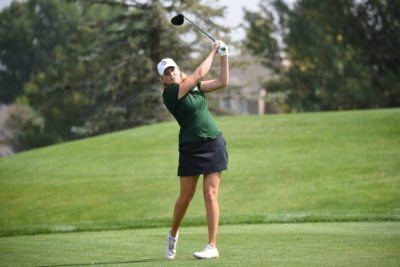 Junior Katrina Prendergast drives the ball during the fall season in 2017. (Photo courtesy of CSU Athletics)

The Colorado State women’s golf team matched its best finish of the season this week as it finished third in the Mountain West Conference Tournament. Katrina Prendergast and Ellen Secor finished third and fourth, respectively, and the rest of the team did their part for the Rams to finish in third place, their best finish since 2010.

Secor was high on the leaderboard for most of the weekend, while Prendergast continued a climb up the leaderboard starting in round two. Meanwhile, Jessica Sloot and Brooke Nolte had their best rounds on the final day.

“What was huge for us this week’s success was the back three,” Coach Annie Young said.”With Jessica Sloot, Haley Greb and Brooke Nolte stepping up, it helped us get the score that we needed. They struggled from time-to-time this season, but they came ready to play this week and it was huge.”

Prendergast started to come for the leaders in the second round as she dropped her score by seven and moved up from 29th to 11th over the course of the day. Secor dropped her score as well with a 1-under 71 and through two rounds she found herself tied for third. Sloot and Nolte improved their scores by three and six, respectively, to get themselves to 5-over 77s and the Rams moved into fifth overall.

“Today was a big day for Katrina,” Young said. “She is trying to make regionals, so that is always in the back of your mind. But she stepped up and that didn’t surprise me one bit. She just went out there and just competed at the highest level.”

The next day saw Prendergast put up the best single-round score of the tournament as she scored a 3-under 69 and moved into third. Secor stayed consistent and had a third round at par and finished just one spot behind her Rams’ teammate.

Nolte and Greb also came up big for the team in the final round. Nolte had her tournament-best 4-over 76 and Greb improved five strokes from the day before when she shot her worst round of 10-over 82.

For a team that was in eighth after round one, the Rams worked their way to a third-place finish.

“I am just proud of how they fought all season long,” Young said. “There were times out there that weren’t very good and there were times were played well and competed. This week was a great way to end the season and I feel like we belong and can compete with the best.”

The season is likely done for most of the Rams, but Prendergast and Secor could receive calls as individuals to compete in the NCAA Championship’s regional round.

Sports reporter Mack Beaulieu can be reached at sports@collegian.com or on twitter @Macknz_James.