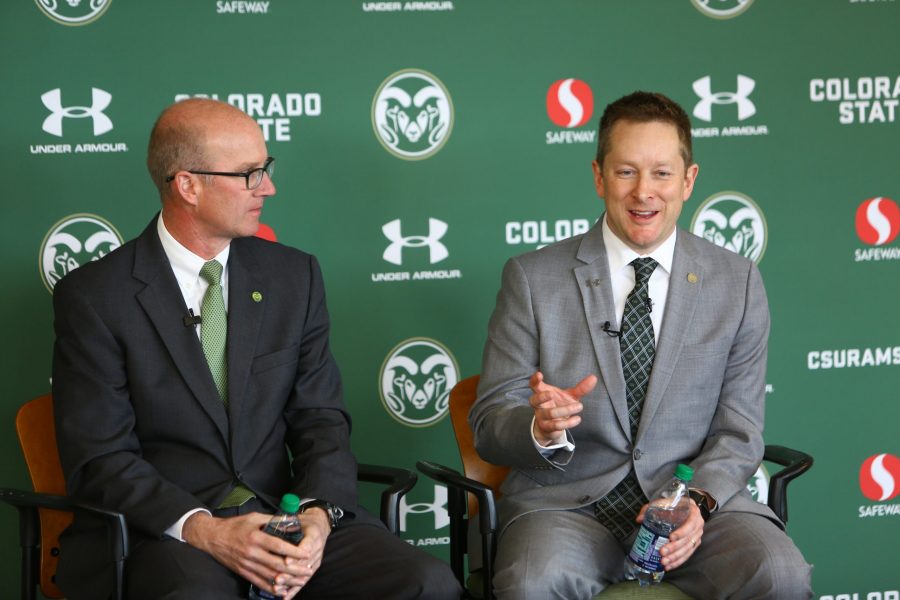 The new era of Colorado State men’s basketball started with a blast of excitement from newly-hired head coach Niko Medved in his introductory press conference, otherwise known as #MedvedMadness.

From the start, the familiarity with those around the program was clear as an applause, hugs and handshakes were exchanged before the start of the introduction with alumni and fans of the university.

A culture downtrodden for the last year of the program, Joe Parker sought a reversal in tone, finding the polar opposite of previous head coach Larry Eustachy. Though his stint lasted a single year at Drake, a five-year commitment was handed to Medved, a signal that the short stint was an indication of rare opportunity rather than a lack of commitment.

CSU took the responsibility of paying the entire $425,000 buyout owed to Drake University, a further sign of the commitment made by Parker.

“The people (at Drake) are phenomenal, they’ve got a great institution,” Medved said. “The timing is unfortunate, but this was a dream scenario for me, everybody who knows me knows that. There was just no way that I could at the end of the day, turn down this opportunity.”

The commitment is one that Medved will be obliged to seek within the roster that he has taken over. Nico Carvacho and Kris Martin have already been given the right to explore their options outside of CSU, and the inner-squad recruitment process started with a conversation prior to the press conference where Medved met his new team.

The same familiarity that is present within the supporters of the organization is not currently available for the team that Medved will be coaching as the short meeting was the only opportunity the new head of the program has had.

“I don’t know much about Niko, but I’ve heard really great things about him,” Carvacho said. “From former players, I talked to Pierce (assistant coach Pierce Hornung) a lot on his staff, I see on Twitter the love that everybody’s giving him, he recruited (Anthony Bonner) and AB has told me about him before he even got here.”

Being the one of the few players on the team with a familiarity of Medved, Bonner will be leaned on by the players considering transferring as Bonner recently tweeted his commitment to the program going into next year.

The sentiments from Bonner will go a long way in keeping the core of the Rams intact as his first meeting left a very lasting impression.

“I’ve already had a first impression and I think there’s no one better for the job,” Bonner said. “I’m really excited about the opportunity to play for him and I think it’s just really cool how he kind of led me here in recruiting and now I get a chance to play for him.”

As well as Bonner, fellow guard Prentiss Nixon was recruited by Medved his freshman year of high school to join the Rams.

The overall lack of connection with the new head coach served as a cautious optimism among the many players in attendance, a direct juxtaposition of the giddiness Medved displayed in his return to Fort Collins.

Having spent the longest tenure of his coaching career on the campus of CSU as an assistant, Medved welcomed the memories brought to mind in his return to the city.

“As I walked through Moby today, I’m just having these flashbacks of the huge crowds, the energy, students waiting in line to get into the games,” Medved said.

An area that lacked prevalence in the tenure of Eustachy, outreach will be huge in garnering support for the latest iteration of CSU men’s basketball, said Medved. After a year in which the seats reigned barren for the program, the goal is a quick reversal of course.

The conclusion of the official introduction further aided the notion of deep roots within the university as Medved hosted the singing of the University’s fight song, a rarity among major coaching hires.

The last note of the song signaled the beginning of the Medved era as the work for next year will begin shortly with the filling of the coaching staff as well as the recruitment and retention of players.