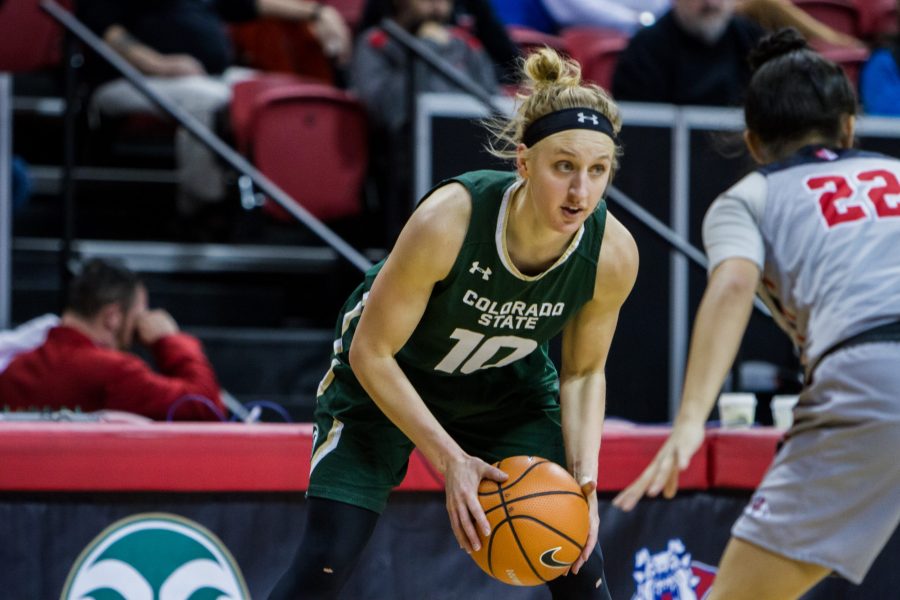 Hannah Tvrdy (10) faces off against Aly Gamez (22) during the Mountain West Conference game against Fresno State in Las Vegas on March. 6. (Tony Villalobos May | Collegian)

LAS VEGAS – Finding the holes on defense has never been an easy task for offensive players, hence why the saying goes defense wins championship.

For Colorado State, the defensive formula all year has worked in their favor as they led the Mountain West in shooting percentage against at 34.2 percent. But breaking zones and putting up points did not come easy throughout the season. That is until they met up with Fresno State Tuesday afternoon in their first game of the MW Championships.

The Rams held the Bulldogs to shooting 32.7 percent while also knocking down nine 3-pointers to help break the zone put up by FSU in the 71-55 win.

“Just we got it inside, passed it outside, hit big shots from the 3,” senior guard Stine Austgulen said. “Our post players were just swinging the ball really, really well today and it was a lot of fun to play.”

In order to break that zone, the Rams came out firing from the 3-point line by attempting 13 shots from deep in the first half. Sofie Tryggedsson hit two of them for the Rams’ first points, but missed her next five. Hannah Tvrdy pitched in the other made 3-pointer, but missed three herself.

On the other end, the Bulldogs went low and kept even with the hot start from CSU. Maddi Utti of FSU benefitted from the looks by scoring nine points in the first half, more points than she had in either of the two previous matchups this season.

CSU did not let Utti’s success continue as the defense clamped down in the paint and also took away the Mountain West’s leading scorer in Candice White. She averages just over 18 points a game and looked strong with six first-half points, including four coming in the final minutes of the first half.

But White only found the bottom of the net one more time as she finished with eight points, going 4-for-13 from the field, including a 0-for-4 performance from deep.

“Obviously they knew about her and I thought Tvrdy came out and played solid defense on her,” Fresno State head coach Jaime White said. “You get a couple layups that she missed and that starts to wear on you a little bit. Just trying to defend and score and I think she ran out of gas a little bit toward the end”

“Candice White is as good a guard as there is in our league and maybe we’ve faced all year,” CSU head coach Ryun Williams said. “(Stopping White) was a huge key for us going into this game was to just make her work for everything.”

Despite the offensive woes from FSU, they kept the game tight by going into the break tied at 26 with CSU. The third quarter and second half as a whole would produce a different outcome.

The surge from the Rams started with Grace Covaivalu, who had been relatively quiet in the first half with two points. Instead of scoring, the 5-foot-7 guard picked up two blocks on one Bulldog possession and four assists to spark the Rams. Those blocks helped the Rams force FSU to miss seven straight shots as they went without a made basket in the final 6:07 of the quarter.

“Grace when she comes in, she’s such a spark player,” Hannah Tvrdy said. “I think when she gets going and has that spark and energy that kind of gets us going and the ball just keeps rolling with that.”

“We knew about Grace, her best games have been against us so no surprise,” White said. “She’s hurt us before just driving and being physical…I think she did (have great focus) which created some openings.”

With a 10-point lead in the fourth, CSU continued to lay on the gas and ballooned their lead up to 17 within two minutes of the final quarter. Stine Austgulen rang home two 3-pointers to help put the game away for good. She finished with a team high four made 3-pointers and 14 points.

Getting down low also helped Tvrdy get in the paint and make a few layups or free throws. She scored 10 points in the second half to finish as the game’s leading scorer with 15.

Overall though, the Rams did their damage from beyond the arc by attempting 23 3-pointers, four more than their season average. The nine that they made helped push their lead further as the Bulldogs could not get much more than made free throws as they edged the Rams with 14-10 in made attempts.

Getting the win over a team who previously won the two regular season matchups is never an easy task. CSU will hope to build from that momentum as they will have to do the same when they take on the regular season co-champion Boise State Broncos on Wednesday at 7:30 p.m. MT.

“We knew coming in that (Fresno State) beat us twice in the regular season so we had a little bit of revenge,” Tvrdy said. “Obviously we want to come out and do everything we can (against Boise State) because no one wants to lose a team three times. We know what we have to do.”