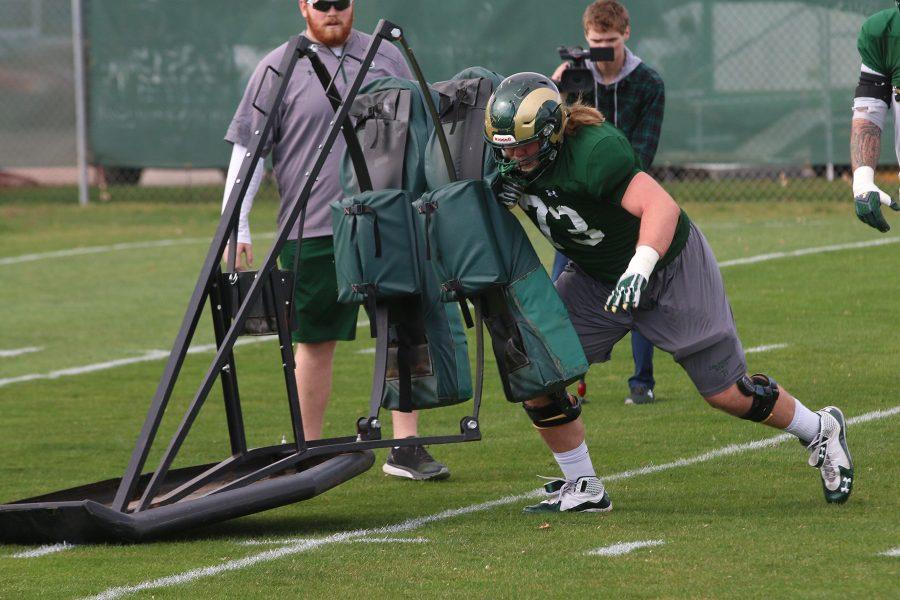 Lost in the mix of Collin Hill’s ACL injury and Colorado State football’s search for a starting quarterback is something of near-equal importance. For the second consecutive season, the Rams are losing three starters from the offensive line.

The senior trio of Jake Bennett, Zack Goldtich and Trae Moxley anchored the offensive line in 2017 and provided a source of leadership that is now missing. All three graduated, leaving glaring question marks in their place.

Welcoming in a new offensive coordinator and offensive line coach in Dave Johnson, Bobo’s search for starting linemen will be one of the focal points of spring and fall practice.

“I say this every year, we’ve got to find five guys. We’ve got to find the best five. Right now, it’s understanding what coach Johnson wants from those guys,” Bobo said. “It’s the little things that play in that position. We’re going to have to have guys play tackle and guard. We’re going to try to keep from flipping them right and left, but it’s learning how to play within the scheme of our blocking rules.”

Of the returning options on the line, Colby Meeks will likely be tasked with replacing All-Mountain West center Jake Bennett. Meeks, who started five games last season at guard, has the most experience of the returning linemen and served as a backup option at center in 2017.

With the changes in coaching staff also comes a fresh start in play-calling from the line. Though blocking techniques and skills will carry over from previous systems, the terms used in play-calling will differ.

It’s in this aspect that Bobo sees Meeks playing an integral role in the development of the entire offensive line.

“This center is going to be like a veteran almost because he’s the most experienced guy, Colby Meeks,” Bobo said. “The other guys don’t know what should be called, they’ll have to listen to him…The terms that they will listen to will all come from Colby, so I think that will help him establish himself as the vocal guy on the offensive line.”

Whether or not that vocal responsibility will allow Meeks to develop into the leader that Jake Bennett was last season is yet to be seen. Players must develop into leaders rather than be named one, Bobo said.

Admitting that the transition may endure week-long stretches of difficult practices at the position, Bobo’s main focus with offensive linemen during spring is twofold: demand effort and continue coaching.

“You can’t be stubborn as a coach, you’ve got to find ways to teach them and give them ways to be successful, but you keep demanding it,” Bobo said. “We’re going to demand every day that they come ready to go and they have an outstanding day with an outstanding attitude.”

“I have enough experience myself to know what to expect and what kind of progression they should be on,” Johnson said. “I expect guys to be able to do what we’re coaching them to do, and to be disciplined doing it, doing it fast and doing it with great effort.”