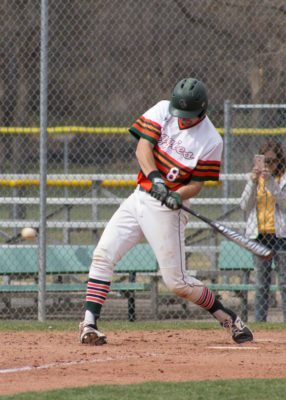 The call is motioned in from the Colorado State dugout. Catcher Jake Walker is focused and scanning the field as he gives his pitcher the signal. After a few seconds of eye contact and finger movements between the pitcher and Walker, a strike lands over the plate in Walker’s glove.

With his calm but competitive attitude, Walker celebrates the CSU club baseball team’s victory with his teammates over rival University of Wyoming on a sunny, Saturday afternoon in March.

This winning feeling is nothing new to Walker, though, because that is all he has done in his career at CSU. However, the road to CSU wasn’t easy for Walker.

As a high school freshman, Walker stepped onto the practice field at Mountain Range High School in Westminster, Colorado looking to make an immediate impact.

Up to this point in his baseball career, Walker knew nothing more than the outfield. However, Mountain Range had no returning catcher, so the position was up for grabs. He made the decision to step up and change positions, a decision that he hasn’t looked back on.

Walker says as a catcher there are a million things running through your head throughout the game. He felt more into the game by constantly checking everyone’s positions, thinking about the next pitch and where to go with the ball.

After his freshman season, he realized he wanted to put all his dedication into the sport that captured his heart at five years old – baseball.

“Jake has always loved baseball,” said high school friend and eventual girlfriend, Lindsey Sandoval. “Ever since I’ve known him he’s been obsessed with it.”

His sophomore year, after giving up football and focusing solely on baseball, Walker was named the starting varsity catcher. In his senior season at Mountain Range, Walker rang up a .426 batting average to go along with 11 RBIs and 23 runs. Walker’s leadership was shown off the diamond as well as he was voted class president his senior year.

His resume was good enough to gain some college’s interests from some Division II and junior college teams. In the end, he decided to sign with a small Division III school, Texas Lutheran University in Seguin, Texas.

Walker loved the baseball community at TLU and made a lot of friends, but after one semester, he decided to leave Seguin assuring it was no longer a good fit for him.

“I don’t think he expected the transition from a fairly large high school to a small college too be so difficult,” Sandoval said. “Ultimately, he decided that he wasn’t as happy at TLU as he thought.”

Upon leaving Texas Lutheran, Walker had his eyes set on two home-state schools to transfer to: The University of Colorado and CSU.

After talking to a few friends and Sandoval, who was enrolled at CSU, he settled on Fort Collins, Colorado. Walker enrolled into classes not knowing whether he would continue playing baseball or not.

Two weeks later, he joined the club baseball team. Club baseball isn’t like a normal NCAA program. The team is completely operated by the players from fundraising events, travel plans and scheduling.

“I didn’t really know much about club baseball. I came out here and gave it a shot,” Walker said. “It’s been a great experience ever since.”

Brett Bogner, current assistant and hitting coach of the baseball team, was team president at the time Walker joined the team. He has seen Walker grow from a quiet freshman to an outspoken leader in the past four years.

Within less than a year on the team, Walker asserted himself as a leader and was voted vice president, which helped him understand all the steps that go into making a club team operate.

Following his vice presidency tenure, Walker was thrown into presidency. His first task as president of the team was no small order: fire the head coach at the time.

Walker says it was an awful situation to tell someone that he wasn’t welcom as head coach anymore. Nevertheless, this decision helped shaped Walker into the president he is today.

“I would consider it a job, honestly,” Walker said. “Kind of like Director of Baseball Operations in a college league.”

Today, he is the only remaining player on the team from his freshmen season and is relied on for big decisions and being the guy who can take lead. Bogner says that Walker has stepped it up a notch as team president and leader and can see his passion for the game.

“It’s a good legacy in the threads that we wear. The foundation that the older guys gave me when I was a freshman, I want to make that same impact on the freshmen now.” Jake Walker, catcher/team president

On game days, Walker is the last man to leave City Park Field. He makes sure everything is picked up and good to go before getting into his truck and heading home. With only a couple months remaining in the season, Walker realizes his accomplished career is nearing the end and can’t help but think of how far he has come as a player and person.

He laughs when asked about himself as a freshman. Walker called himself immature and someone who had a bit of a temper problem. He’s happy he no longer overreacts to umpire calls and stopped carrying things that happened on the baseball field into his personal life.

“Jake definitely took the losses more personally freshman year and would often get extremely frustrated with himself,” Sandoval said. “I think as he grew closer with the teammates he developed more of a connection with CSU’s team, and shifted his mindset from only wanting to win to just wanting to play.”

A more mature, wiser Walker is now concentrated on finishing his legacy at CSU. He has won three straight conference championships and hopes to make it four, along with a regional championship.

But the one missing piece from Walker’s resume is a national championship, which he will tell anyone is his biggest goal before he leaves.

“You can tell he wants it really bad,” Bogner said. “He’s been so close a couple times.”

In Bogner’s eyes the Rams had one of their most talented teams last season but failed to win the national championship. Sandoval notices Walker’s drive for the championship, as well.

“I can see Jake wants to win the championship so bad,” she said. “I think Jake wants a win to prove that the team is worth a lot more than people and the school may think.”

This season, the Rams are young and still learning to play as a team. Bogner credits Walker for taking initiative and helping some of the younger players adjust. Bogner knows that it is going to take a lot to win the national championship this season, but that hasn’t stopped Walker from believing.

Nevertheless, if Walker’s career ends without that elusive championship, he will still be proud that he upheld the legacy others before him paved.

“It’s a good legacy in the threads that we wear,” Walker said. “The foundation that the older guys gave me when I was a freshman, I want to make that same impact on the freshmen now.”

Following graduation in May with an Economics degree, Walker plans to attend law school somewhere out of state and focus on changing the healthcare platform through healthcare law.

Bogner is excited to see what Walker will achieve in his life after baseball. He knows CSU club baseball is designed to prepare young men like Walker for the journey to come.

“It’s weird to think that his last game is coming up, and kind of crazy that this journey is coming to an end,” Sandoval said.

No matter what destiny has in store for Walker’s team this season, he is ready to cement his legacy at CSU.

Collegian sports reporter Sergio Santistevan can be reached at sports@collegian.com or on Twitter at @TheRealsSergio