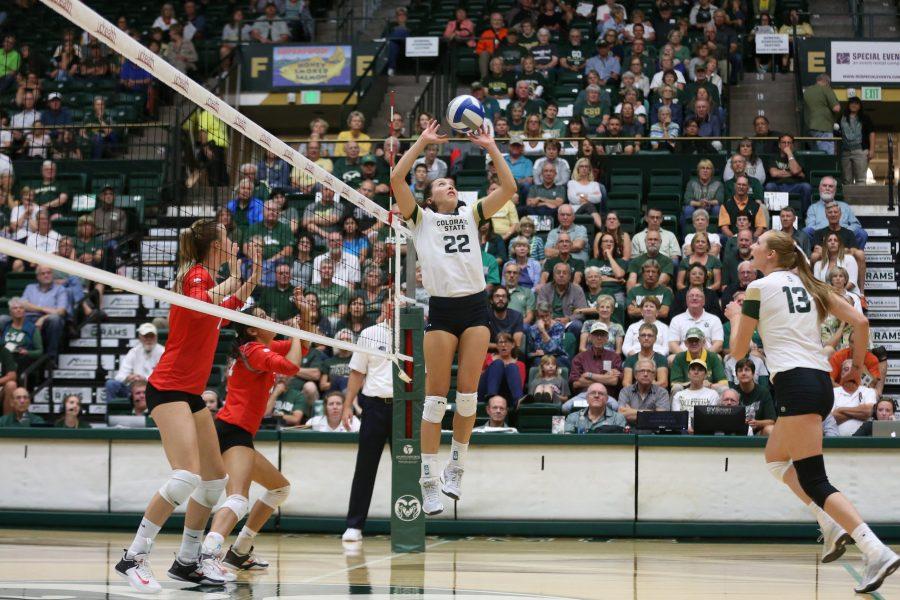 Sophomore Katie Oleksak sets the ball for Sophomore Teammate Kristie Hillyer during the third set of action on Sept 21 against the University of New Mexico. The Rams defeated the Lobos in three decisive sets, the Rams are now 11-2 on the season. (Elliott Jerge | Collegian)

Oleksak is coming off one of her best seasons during her time here at CSU. During the 2017 season, the Mountain West Player of the Year started all of the Rams’ 33 games at setter.  She averaged 11.94 assists per set which ranked eighth in the nation. In 20 matches, Oleksak finished with at least 40 assists. On Aug. 25, she recorded a season-best 59 assists in one of the Rams’ biggest games against Duke. Oleksak finished the season with 64 kills with a .342 hitting percentage.

Hillyer led the Rams in blocks for the second consecutive season with 1.46 blocks per set. She also ranked 17th in the nation in blocks. The Rams’ middle blocker finished second on the team with a .383 percentage which ranked 33rd in the nation. Hillyer was also named Mountain West All-Conference.

In the same Duke game on Aug. 25, Hillyer posted a career-high 19 kills and had 10 matches with double-digit kills. On Sept. 1, Hillyer posted a stat line of 13 kills and 10 blocks. In that same game Hillyer had a season-best three solo blocks. This is Hillyer’s second consecutive year trying out after being selected for the U.S. Collegiate National Team last year.

Athletes that are selected for the National Team would begin training as early as the spring. Selections for the Collegiate National Team will be made by the end of March.