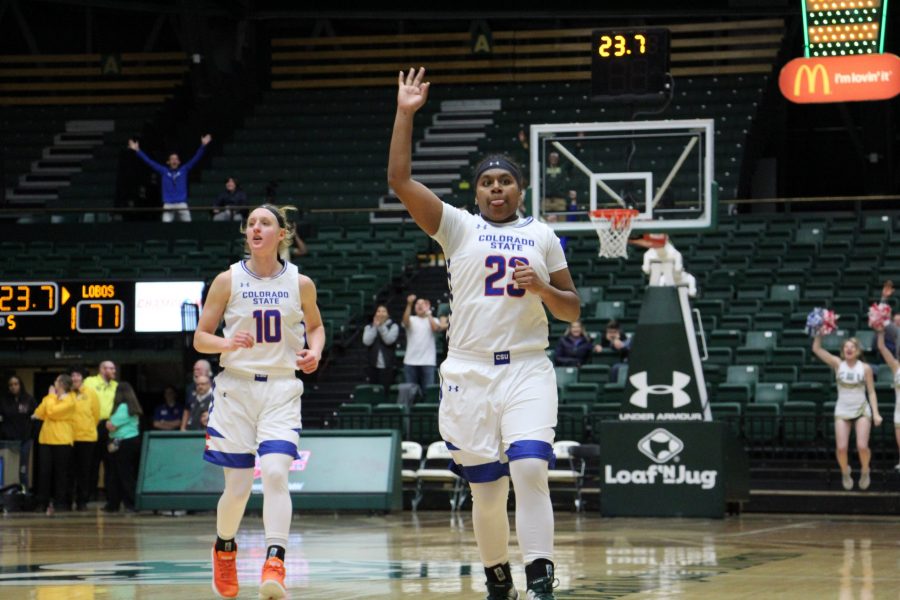 Redshirt freshman Grace Colaivalu (23) backpedals with redshirt senior Hannah Tvrdy after making a 3-pointer against New Mexico. The Rams beat the Lobos in overtime with a score of 74-71 on Jan 27. (Joshua Contreras | Collegian)

A native of Seward, Nebraska, Tvrdy joins Ellen Nystrom and Meghan Heimstra as the only Rams in program history to make the All-Defensive team. The senior’s 6.4 rebounds per game led the Rams and helped CSU to a league-leading 56.2 opponents’ points per game average in conference play. Tvrdy’s 5.3 defensive rebounds per game rank fourth among all players in the Mountain West.

Along with Tvrdy’s award-winning defense, the senior guard led the Rams with 13.2 points per game in conference play. Tvrdy was the lone Ram to crack the 20-point threshold three times, highlighted by a 28-point double-double versus San Diego State on Jan. 27. Tvrdy followed up her career night against the Aztecs by knocking down a game-winning triple in overtime against New Mexico, earning her Mountain West Offensive Player of the Week on Jan. 29.

Colaivalu joins Tvrdy on the year-end accolade list as a member of the All-Freshman team. Colaivalu is the first Ram to earn All-Freshman honors since Ellen Nystrom and Elin Gustavsson in 2013-14. The Sacramento, California native burst onto the conference radar with 26 points in her Mountain West debut versus Boise State. The freshman topped that performance one week later with a career-high 29 points against San Diego State, featuring the game-winning layup as time expired. Colaivalu finished her first season in green and gold leading the team with a .478 field goal percentage. Her eight points per game average ranks third.

Tvrdy and Colaivalu open the 2017-18 Mountain West Championship with a first-round matchup against Fresno State Tuesday at 3:30 p.m. MT in Las Vegas.

Collegian sports reporter Christian Hedrick can be reached at sports@collegian.com or on Twitter @ChristianHCSU.