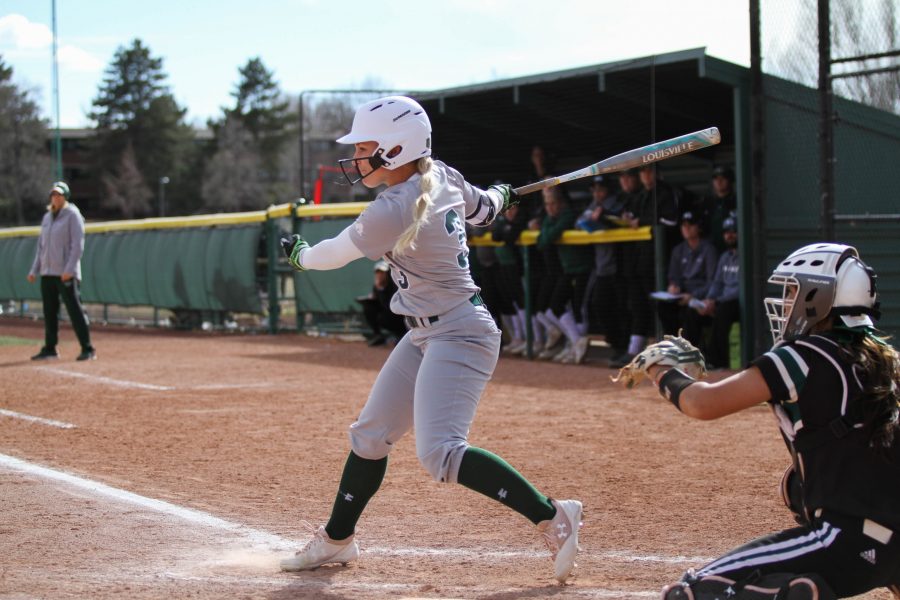 Senior Madison Kilcrease takes a swing during the game against Utah Valley on March 9. The Rams beat the Wolverines 5-3. (Ashley Potts | Collegian)

The Colorado State softball team had a tough weekend in Fresno, California last weekend as they dropped two of three games to Fresno State University and fell to .500 in Mountain West play.

The Rams’ offense struggled to produce over the weekend and never got more than four runs for their pitchers. In what has become a bit of a theme for the Rams, in the two games CSU lost, their only runs came on home run swings. Although the Rams have six batters over a .300 average, they’ve struggled to put it all together consistently this season.

“The trick is to not have any holes in your line up,” coach Jen Fisher said. “I don’t think we do, but we’re having slumps.”

The series got started on March 23, with the Rams taking a 9-3 loss to the the Bulldogs. Bridgette Hutton easily had the worst start of her season so far, allowing nine runs in five and two-thirds innings while the Rams could only muster four hits, all in the first two innings.

CSU put two runners on in the top of the second and redshirt junior Danni Klein hit the first home run of her collegiate career, but the 3-0 lead didn’t last long as the Bulldogs put four runs of their own runs across in the bottom of the third with two outs already recorded.

The Rams only recorded one hit after Klein’s home run, but did better in the second game to generate runs without a power stroke. Despite leaving 12 runners on base, the Rams pushed across four runners in small ball fashion for a 4-0 win in one of Kaylynn Pierce’s best performances of the season.

Getting plenty of hits but scattering runs has been a recurring problem for the Rams’ lineup this season.

“I was looking at it today and I think we have enough evidence now to see who’s looking best where,” Fisher said. “Perhaps a more consistent role could help some players…We can start to stick to a certain order.”

The Rams had enough offense on Saturday, though, with the first ever shutout of the Bulldogs and only the second win ever at Fresno State. The Bulldogs threatened to score in the fifth, sixth and seventh innings by putting two runners on base in each, but with the closing help of Allison Petty, the Rams were able to hold the shutout.

The final game of the series was a bit of a heartbreaker for the Rams as they watched the three-run lead, produced on a Corina Gamboa home run, disappear over the course of the final three innings.

Hutton held the Bulldogs to one hit before the fifth inning, but things slowly unraveled from there. The Bulldogs leadoff hitter homered in the fifth. After a walk and a single in the bottom of the sixth pushed another run across, Pierce came in to relieve Hutton. The first runner Pierce was responsible for got on and eventually scored to make the game 3-3.

In the top of the seventh, the Rams threatened, but left runners in scoring position. In the bottom of the inning, Petty was saddled with the loss as an error by the centerfielder allowed the leadoff batter to get on. Three batters later, the runner scored on a double down the right field line. While Petty had some rough luck in the final frame, Fisher was happy to get her out there.

“(Larisa Petakoff) didn’t close out because Pierce and Petty both looked strong and did some good work in the win,” Fisher said. “We’ve been seeing growth and maturity out of Petty and she hadn’t got a chance.”

CSU’s next action comes this weekend as they head to Lawrence, Kansas to take on the University of Kansas at Rock Chalk field in a three-game series.

Collegian reporter Mack Beaulieu can be reached at sports@collegian.com or on twitter @Macknz_James