CSU to face Utah State in first round of MW Tournament 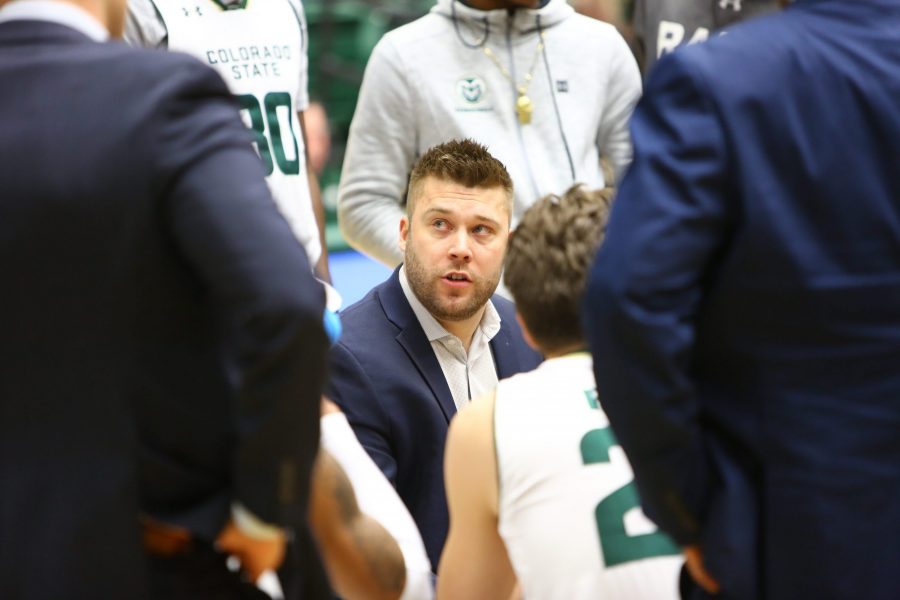 Interim head coach Jase Herl talks with his team during a time out in the first half against the San Jose Spartans. (Davis Bonner | Collegian)

After solidifying the No. 10 seed in the Mountain West Tournament more than a week ago, Colorado State learned it will play Utah State in the first round of the tournament Wednesday after the Aggies knocked of UNLV Saturday night.

CSU defeated Utah State during the team’s only meeting this season on Jan. 10 in one of the Rams’ most complete games of the season. During the game, guard Prentiss Nixon scored 22 points in the second half to hold off the Aggies and pull CSU to an even 9-9 on the early season.

“Utah State, I thought we put together a complete game, it was one of our better games of the year at their place,” interim head coach Jase Herl said following practice on Friday.

“I thought we guarded well, I thought we played extremely unselfish that game and we rebounded the ball. We pressured them, we had their guards out of rhythm a little bit, so that’s obviously something we’ll look at going forward.”

Since that game, though, basketball is drastically different in Fort Collins. At the time, the road victory served as a momentum booster for a struggling Rams teams and the first of two crucial road victories.

After the victories, CSU closed the season losing 11 of its final 12 games while dealing with the Larry Eustachy saga. Throughout the turbulent season, the MW Tournament served as a sliver of light at the end of the tunnel. Days away from the first-round game, that mindset remains.

“Everyone’s going to count us out. No one has us winning any games,” Nixon said after the team’s loss to New Mexico Wednesday night. “We don’t worry about what everyone else has to say. We’re worried about the people in that locker room. We know that we can be in games with big-time teams…When we bring it and we’re ready to play, we’re pretty damn good.”

CSU’s kryptonite to the end season has come in two forms: the inability to close late leads and, most recently, a lack of energy to open games.

The Rams showed that sluggish start twice in the final two home games against Boise State and New Mexico, falling into deep holes within the opening minutes of the game that make a comeback all but impossible. Nearly fully recovered from a myriad of injuries that slowed him down, Nixon realizes his role in eliminating those early deficits.

“I think it starts with me,” Nixon said. “Energy wise, if I can fly around and show that I’m energized at the beginning of the game, it will go a long way for this team. I’ll take responsibility on that one and try to change that by Wednesday.”

Herl, who said that he is still experimenting with lineups to open the game fast, understands the danger of surrendering quick deficits.

“If you’re down 30, the x’s and o’s don’t matter,” Herl said. “That’s strictly playing smart, playing hard, playing for each other. Just trying to find that group of guys that’s going to fight, compete from the jump until the buzzer sounds.”

Though the Rams are an entirely different squad than the team who made it to the championship game in last year’s MW Tournament, they also return some of those contributors. Nixon, Nico Carvacho, Anthony Bonner and the currently suspended J.D. Paige all contributed to last year’s run.

Paige’s status for the tournament is still up in the air after being suspended for violating team rules on Feb. 24. Still, CSU has players who know the physical and mental toll the tournament presents.

“A few of us know what it takes to get there,” Nixon said. “It’s going to be a grind, four back-to-back games. But we know we can do it. We did it last year with three back-to-backs with seven guys. Everyone was tired but we still fought through it and were in the game until the end.

CSU’s quest to shock the conference begins Wednesday at 2:30 p.m. MT in Las Vegas, Nev. The winner of the game will face No. 2 Boise State in the quarterfinals on Thursday at 7 p.m.