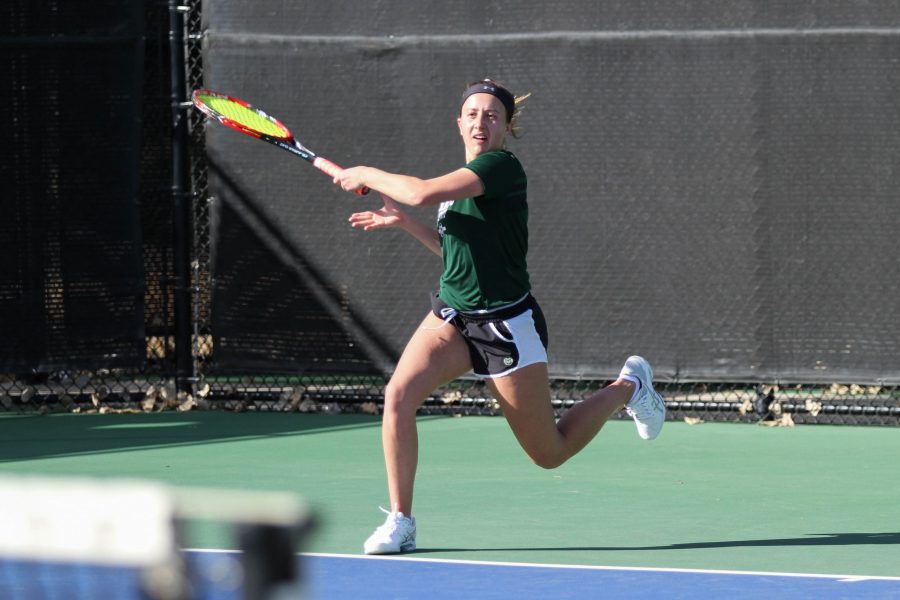 Junior Emily Kolbow hits against her oppenent from Omaha during the Rams first home matches of the season on March 3. (Ashley Potts | Collegian)

After consecutive weekends on the road, the Colorado State women’s tennis team returned home to the CSU Tennis Complex to battle against Creighton University and Weber State for back-to-back matches. Despite the home court advantage and warm weather in Fort Collins, the Rams dropped the duals against both schools.

Sophomore Alyssa Grijalva, the team’s current season record holder for singles wins, was not able to compete after suffering a concussion earlier in the week. The Rams faced the Creighton Bluejays on Saturday to begin the weekend.

Doubles play started the matchup with hope for the limited number of Rams on the court. Solene Crawley and Emma Corwin paired up to take on Darby Rosette and Kendra Lavallee, beating the Bluejays, 6-1. Securing the Rams’ doubles team point was the duo of Riley Reeves and Emily Kolbow. The two swiftly defeated Claire Embree and Erin Epperson, 6-1.

With only five players entered in singles, the Rams suffered.

Emily Luetschwager was the only CSU player to win her singles match. Luetschwager defeated Michaela Henne, 3-6, 6-1, 6-3.

Without Grijalva in the mix, Creighton’s Celine Massereau won her singles match by default. To follow, Rams Priscilla Palermo, Kolbow, Corwin and Crawley all lost their singles matches.

“We played well to get the doubles point, but we will absolutely have to step up our singles tomorrow,” coach Jarod Camerota said. “It’s tough with injuries, but it’s how the seasons go and a lot of teams are having to deal with it.”

Coach Camerota and his players remained hopeful as they went into play with Weber State on Sunday.

The Rams gained the first advantage, beginning the day with a victory in doubles play. Luetschwager teamed up with Palermo, to fill Grijalva’s absence, and the duo defeated Caitlin Herb and Pei-Hsuan Kuo, 6-3, 6-1. Reeves and Kolbow took the doubles team point with their win over Mckenna Lloyd and Emily Tanner, 6-0.

Freshmen Luetschwager and Palermo walked away with individual victories over Kuo, (6-3,6-1) and Herb (6-1,4-6,6-4), respectively. Luetschwager’s win was her first singles match at No. 1 and increased her singles record to 10-4 this season.

Although the Rams embraced a promising start, the absence of Grijalva proved to be costly once again. Weber State’s Lloyd gained a victory for the Wildcats with an automatic win in her singles match.

“We’re playing good doubles, so that’s definitely one positive from this weekend,” Camerota said. “We need to continue doing that and get healthy. We’ll be ready for conference. We just need to put in the work the next few days before we play Utah State on Thursday.”

CSU will match up against Mountain West rival, Utah State, at home on Thursday and host Boise State next week at the CSU Tennis Complex.