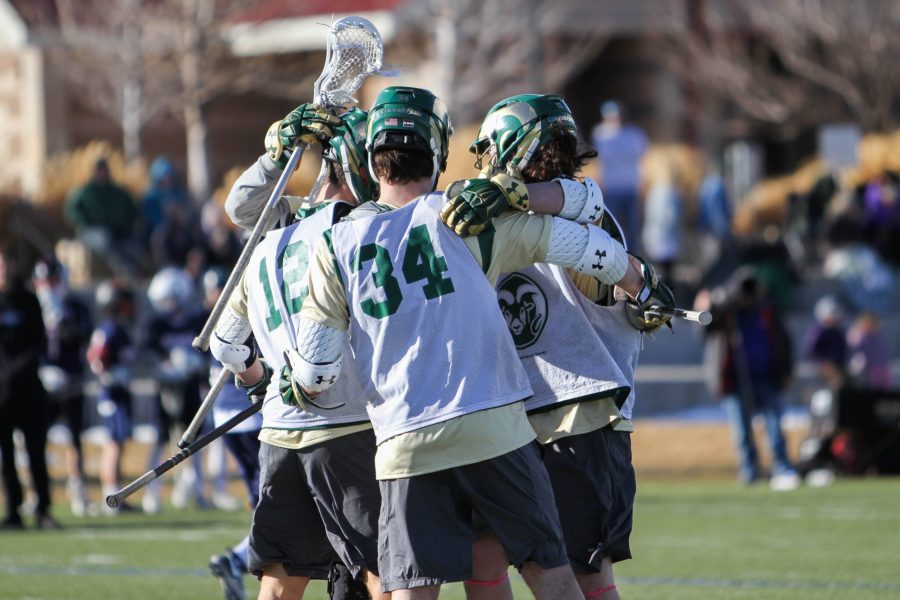 Brian McGhie (18) and Gabe Remshardt (34) celebrate with teammates after a goal against Metro State. The Rams beat the Roadrunners 18-6 in the first scrimmage of the season on Saturday, Feb. 3. (Ashley Potts | Collegian)

The Colorado State men’s club lacrosse team capped an impressive performance with a comeback victory over defending champion and No. 3 Grand Canyon University last Thursday night to give the Rams their first home victory of the season, 7-6. As the final horn blew to signal the end of the hard-fought clash, celebration broke out on the field.

Players and coaches jumped around in celebration of the upset victory as smiles illuminated their faces. However, no smile was bigger than freshman midfielder Max Ickes, who made his first career start in Thursday night’s game.

“I feel great. I never got any playing time before this and to go straight to starting is something else,” Ickes said. “That was really cool.”

Similar to the rest of the team, Ickes started off slow at the beginning of the game. As the game progressed, though, he gained more and more confidence in himself and his teammates.

The first two quarters of the game were gritty and physical as both teams tried to gain an advantage. As the halftime horn blew, the Lopes lead the Rams 1-0.

The Rams came out of halftime with a lot more tempo and energy. They moved the ball around looking for the right opportunity to score but still came up empty. With stellar goalkeeping from the Lopes, they led the Rams 3-0 with a few minutes left in the third quarter.

Despite being down by three goals to the No. 3 team in club lacrosse, the Rams never gave up. They encouraged each other the whole game and finally got results when sophomore midfielder Deryk Delahanty put the Rams on the board for their first goal.

Momentum started to favor the Rams as the fans showed more energy. At the end of the third quarter, the Lopes led 4-1. Even though the Rams gave up a goal to end the quarter, they had the crowd in the game and that is all they needed.

Within the first five minutes of the fourth quarter, the Rams netted two goals from freshman midfielder Gabe Remshardt and senior midfielder Peyton Trask. Down just one goal, the Rams were on the verge of taking control of the game.

Freshman defender Daniel Simpson played a huge role in helping the Rams’ comeback. Simpson played tough defense, leading to opportunities for the Rams at the other end.

“In practice we really stress giving our offense chances and we couldn’t have asked for a better game from our offense coming in strong at the end,” Simpson said.

Freshman attacker Pete Aplet knotted the game at 4-4, sending the crowd into a frenzy and giving the Rams all the momentum. With four minutes left in the game, Remshardt broke the tie with his second goal of the game that put the Rams ahead 5-4.

Remshardt led the team in scoring with his two goal performance.

“I definitely wasn’t proud of my performance in the first half but we sat down at halftime, talked to the coaches and talked to myself a little bit and came out flying. It felt good,” Remshardt said.

The Rams weren’t done there. Senior attacker AJ Stewart added to the lead to give the Rams a two-goal advantage. GCU scored another goal that made the game 6-5 Rams. With two minutes remaining and the game still up for grabs, freshman midfielder Brock Alfred sealed the deal with a goal that put the Rams up 7-5. GCU added another goal with only seconds on the clock, but the damage was done.

As the final horn blew, the Rams had completed not only an epic comeback, but an upset as well. This was a much-needed win for the Rams against one of the top undefeated teams in the nation.

“I believe in this team in every way, even when we lost that game on Sunday,” coach Ryan MacDonald said. “But to see them turn it around tonight and see that they can really come together, we have something special here. We most definitely do.”

The Rams look to carry this momentum into Tuesday’s home game against Cal Poly. The game will begin at 6 p.m. at the Intramural Fields at CSU.