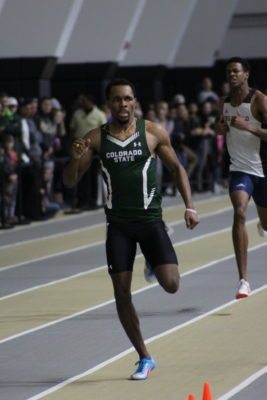 The Colorado State track and field team kicked off its outdoor season the only way they know how: setting program records.

Day one of the Mines Nature’s Bakery Invite was highlighted by the performance of Maria Muzzio. Muzzio registered a personal best in the shot put with a mark of 50- 7 1/2, eighth on CSU’s all-time outdoor list. Muzzio becomes the 10th player in program history to register a mark of 50 feet or more.

“We just changed her to a rotational technique this fall,” head coach Brian Bedard said in a statement. “Some things are starting to work for her, so that’s fun to see. She was a glider last year, which is a completely different technique, so we made the move to try to suit her talents. Any time you make a major shift in technique, inconsistencies are there and she’s done a really good job of being coachable. We’re off to a good start there.”

CSU’s distance squad highlighted day two of the meet with more record-breaking performances. Freshman Jessica Ozude set the record for fastest time by a freshman in the 200 meters. Ozude finished with a time of 23.82 to win the event by about three tenths of a second. Her time ranks second on CSU’s all-time list. Ozude also won the 400 meters with a time of 54.59, sixth on CSU’s all-time list.

In her first collegiate 100-meter hurdles freshman Destinee Rocker set the freshman record with a time of 13.45, also second on CSU’s all-time list. Rocker’s time also earned her first place in the event.

“I’m excited for our sprinters and hurdlers,” distance coach Karim Abdel Wahab said. “They’re a great young group that’s been working and competing hard. We want to make sure we challenge them enough to reach their potential, so I’m really happy with their performances. It’s still early, and they competed well and showed what they’re capable of. We’re trying to see if we can cause some damage at the Mountain West Championships and hopefully at preliminaries and nationals.”

Three Rams had top-20 scores in the heptathlon. Gabby Smith led all Rams with 4,669 points. Smith placed second in the event and her score ranks 17th all-time for CSU. Talia Marquez scored 4,621 points in her collegiate heptathlon debut, ranking 18th all-time. Amelia Harvey scored 4,596 point to earn her the 19th spot on the all-time list.

“Sometimes you don’t know what to expect on opening weekend,” Bedard said. “When our staff reviewed how we did across the board in all of the event areas, we had quite a few highlights. I thought it was very encouraging for our first meet. The kids had a great attitude and we were fortunate enough for nice weather today. I don’t think it could have turned out much better for a first meet. I think the staff and athletes are excited for how things went today.”

The Rams will continue their outdoor season with split competition next weekend at the Stanford Invitational in Stanford, California and the Tom Benich Invite in Greely, Colorado.