CSU football establishing key leaders on both sides of the ball 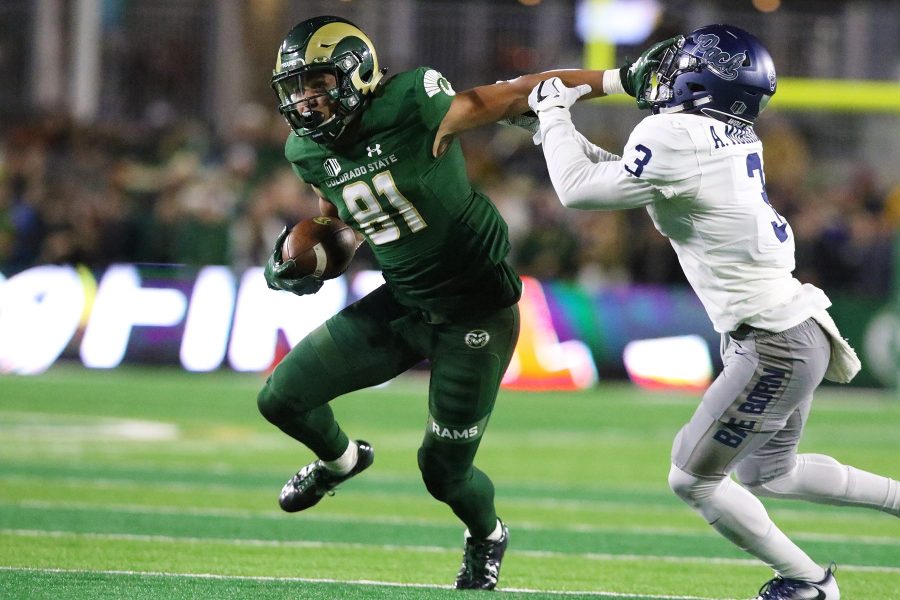 Junior wide receiver Olabisi Johnson (81) stiff arms a Nevada defender during the first half of the Rams' 44-42 win over the Wolfpack. (Javon Harris | Collegian)

Since the beginning of spring football in 2017, Colorado State head coach Mike Bobo touted the leadership qualities of Olabisi Johnson. Amid senior leaders like Nick Stevens and Jake Bennett and playing alongside the prolific talent of Michael Gallup, Johnson, then just a junior, humbly led by example.

One year later, the Rams enter spring football having lost seven starters on offense. No longer will Stevens and Bennett command the offense with a bevy of other talented seniors. Through all the changes though, Johnson’s leadership remains as steady as ever.

“Guys look up to us, I see it on the field and I love it because I can coach up guys on effort, on anything,” Johnson said. “Once you’re in the system, once you have the mental awareness, it’s just more muscle memory. It’s way easier to coach a guy up here or there…I can just help them out, tell them where to go, what routes to run.”

Given the changes of seniority throughout the offense, Johnson’s role as a leader has also developed. When last year he may have been able to lead innocuously, Johnson’s vocal guidance will be the focus of the spring.

“(Johnson) has always had leadership qualities because guys respect him and he has influence,” Bobo said. “He has taken that next step of being vocal and challenging guys or encouraging guys and speaking up. He did that with his position group, but now I can hear him do it with the whole team…I hear him talking in the huddle and kind of setting the tone.”

Paired with fellow senior and audible leader Izzy Matthews, CSU’s offensive leaders are taking a different shape than in years past.

Meanwhile, the senior linebacker duo of Tre Thomas and Josh Watson are bestowed the duty of defensive direction. Similar to the offensive transition, and most football seasons in general, CSU graduated five starters on defense, led by on-field leaders Evan Colorito and Jake Schlager.

While Watson already served as a vocal leader for much of last year, Thomas’ progression adds to the talented crop of linebackers.

“I saw Tre Thomas taking steps to be a leader because of his effort and how hard he was running,” Bobo said.

Roommates off the field, the two fifth-year players combine different styles of leadership to motivate teammates. Watson’s vocal tendencies and Thomas’ effort play well with each other, Thomas said.

“We click and we bond like no other,” Watson said. “Our relationship and our trust within each other is key. Being able to trust him playing next to me and playing on the edge across from me is key. As long as we’re on the same page, we can push others to know that they can trust us…Guys feed to that and guys follow us, and that feeds through the whole team.”