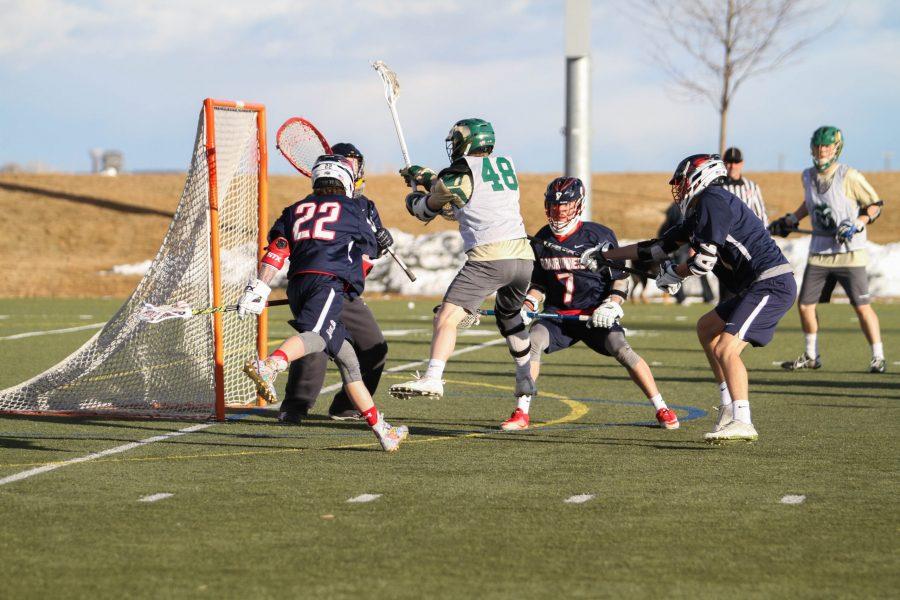 Freshman Adam Elliott takes a shot on Metro State. The Rams beat the Roadrunners 18-6 in the first scrimmage of the season on Saturday, Feb. 3. (Ashley Potts | Collegian)

This past weekend, the Colorado State men’s lacrosse team traveled to Oregon to face off against The Oregon Ducks and the Oregon State Beavers in a two-game road trip.

The weekend did not start off as the Rams hoped, dropping the first game to Oregon 13-4 in Eugene. After Oregon’s goal five minutes into the first quarter, the Rams never found a way to stop them.

Oregon added seven more goals to their tally taking an 8-0 lead against the Rams before Grant Alfred found the back of the net with 47 seconds left in the quarter.

The second half never got much better for CSU. Oregon came out of the gate scoring almost immediately taking a 9-1 lead with 12:55 remaining in the third. In the next three minutes, Oregon scored twice more to open a 10-point lead with eight minutes left in the quarter.

The Rams got on the board again after Alec Womack’s goal with four minutes in the third, cutting the Ducks lead to 11-2. Pete Aplet was the next to get on the board for the Rams, followed by Deryk Delahanty in the final seconds of the game to give the Rams some salvation after losing 13-4, their first loss of the season.

“We were excited to play, came out 0-0 until about two minutes in the first quarter when we fell apart,” coach Ryan MacDonald said. “We never really came back from the hole we dug. We have a really good team, we just didn’t show up that day.”

The second game ended up much better for the Rams when they traveled to Corvallis to take on the Beavers of Oregon State. Oregon State gave the Rams a tough battle, but CSU came out victorious in the closely contested game.

CSU’s Gabe Remshardt opened the scoring just minutes into the first quarter. Oregon State responded with two goals of their own before CSU’s Pete Aplet scored with 1:15 left.

The game went back and forth with goals until CSU found some separation from the Beavers, taking an 11-8 lead with 2:55 remaining in the third.

Oregon State made a comeback during the fourth; however, the Rams held them off and finished the victory with a score of 13-11.

“We showed a lot of character against Oregon State to bounce back after the tough loss against Oregon,” MacDonald said. “The guys came together as a family and played as a team. We really grew over the weekend, only onward and upward from here.”

CSU’s next games will be on the road against Georgia Tech and Georgia on March 9-10. CSU will return home to the Lagoon field on March 18, where they will face off against the Arizona State Sun Devils in the first home game of the season.

Collegian sports reporter Evan Grant can be reached at sports@collegian.com or on Twitter @EGrantSports.