Changes imminent for CSU after first-round exit in MW Tournament 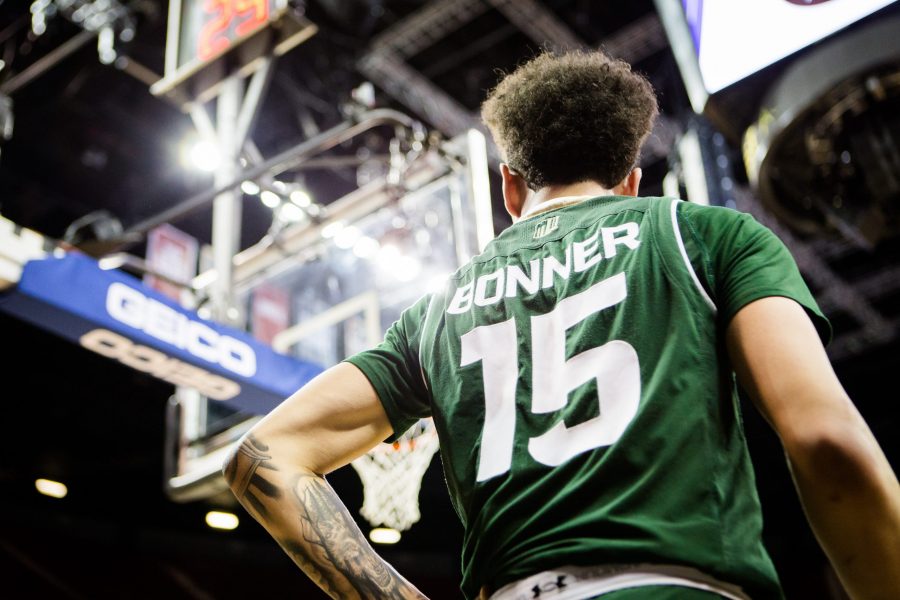 Anthony Bonner (15) stands on the baseline as he waits for the game to resume during the Mountain West Tournament on March 7. (Tony Villalobos May | Collegian)

LAS VEGAS – What defines a championship team most of all is their ability to adapt to what their opponent has given them and make changes. No matter what has been given, the great teams find a favorable matchup and ride that to a victory.

For Colorado State, the beginning to their first round matchup looked as if they had found that hole in their opponent, the Utah State Aggies. The Rams jetted out to a 20-5 lead behind strong defense and efficient offense.

But the same mistakes that CSU has committed all year creeped back in. Open lanes on defense and lack of ball movement on offense allowed for USU to come back and control the Rams in the second half, giving them the 76-65 win and the trip to the second round of the Mountain West Tournament.

“I thought they executed exactly what we wanted to do early,” interim head coach Jase Herl said. “I couldn’t be more proud of these guys. They battled adversity all year. That’s something they will be better for in life moving forward.”

All year, the Rams have stated how their paint defense needed to improve as seen from them giving up many buckets to some of the worst teams in the conference down low. They started out focusing on the Aggies’ drivers and created havoc with multiple turnovers and contested shots, resulting in USU being held without a made field goal for nearly 10 minutes.

Winning teams are able to make changes, though, and USU proved why they would come out victorious when they handed the ball to Julion Pearre. The guard made four of his first five 3-pointers in the first half to open up the floor and force CSU to come out to the line. That newly found space allowed for the Aggies to open new holes and ultimately finish with 28 paint points, 22 of which came in the second half.

“We were playing so hard and trying to put pressure on the good guards that they had,” Nico Carvacho said. “(Utah State) made some tough shots, all of them. It is what it is, we just try to pressure. Some of the times they got by us and it happens.”

If down low was the biggest struggle for the Rams on defense this year, then ball movement was the equal on the offensive end. CSU entered the tournament ranked 10th in assists per game with 12.9 and finished Wednesday afternoon with only nine.

Ever since Herl took over the team, the emphasis has been on getting back to being loose on the court and playing similarly to pick-up style of ball. For the Rams, this meant the guards taking the ball into their own hand and trying to shoot their way to victory.

“I think we were just playing basketball at the end of the day,” Prentiss Nixon said on the team’s lack of assists. “Anthony (Bonner) can distribute the ball. I can distribute the ball, that’s not a question…They made shots, it wasn’t about assists or anything like that, they just made good shots down the stretch and out rebounded us.”

Lost in this barrage of shots from the guards was Mountain West Honorable Mention Carvacho who attempted only six shots in the game. He finished with eight points and 10 boards and did not make too much of an impact around the bucket.

“I thought he got some good looks, I think he got a little frustrated, he didn’t get a few calls and he let that get to him a little bit,” Herl said. “I wish we could have figured out a way to get Nico some more touches. Credit Utah State for that they did a good job because he’s been on such a hot streak lately that he’s like Prentiss now. He’s moving up the list of guys that when they are preparing for a team that they are going to talk about.”

The next step for CSU will be to find a head coach and after the performance of CSU in the weeks under Herl, his chances will be mixed. As a motivator, Herl did well by inspiring the guys to play hard and compete, as stated by Nixon when asked what he thought of Herl as a head coach.

But a team needs to be able to make changes and the play of CSU did not suggest that they were up to finding a new style. They were blown out in their final two home games of the year by Boise State and New Mexico and had no answer when the Aggies started to make outside shots.

“I think we competed for 40 minutes today and that was the emphasis coach Jase put in today,” Nixon said. “Credit Utah State, they made some good shots down the stretch. We wanted to give them long 2s and they made long 2s.”

And yet again, the Rams bench dwindled down to seven players, with only six seeing significant playing time Wednesday. Robbie Berwick and J.D. Paige were not on the bench and Logan Ryan only entered the game when Deion James fouled out. Herl declined to comment on the status of Paige and Berwick in the postgame press conference.

No matter what, the offseason will bring about some sweeping changes, coach and player wise. Making changes is never an easy task, just ask those championship teams making them on court. Now those transitions will have to be program-wide if the Rams want to make a difference on the court.

“Just voice our opinions on what we wanted, how we see in a coach,” Carvacho said on the team’s meeting with Joe Parker regarding the next coach. “They went into the room and asked all of us three things, three qualities we want to see in a coach and we all did.”