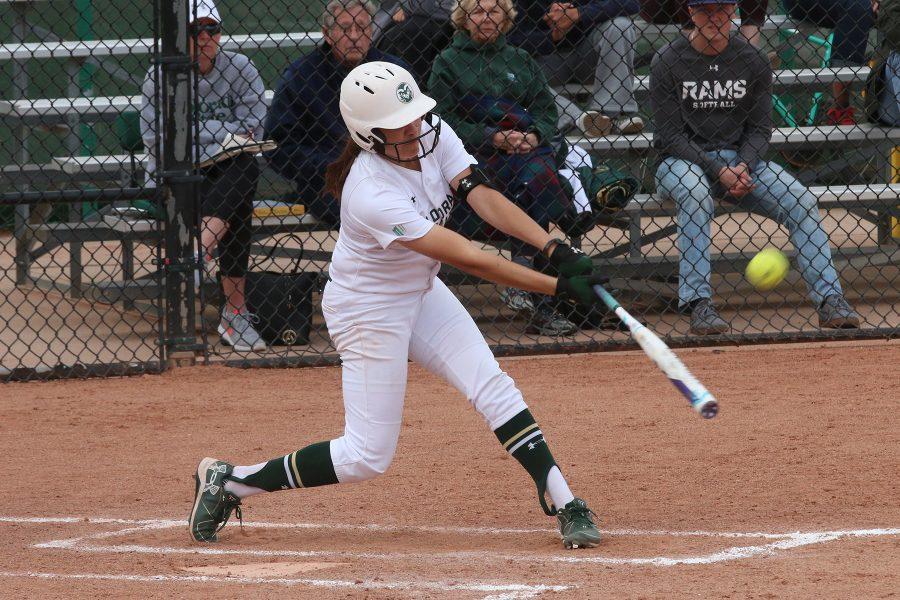 Colorado State freshman Corina Gamboa swings at a pitch thrown by UNC in the second game of the double header. The Rams defeated UNC in both games on April 11, 2017. (Elliott Jerge | Collegian)

The Colorado State Rams’ softball team (8-6) suffered a major letdown this weekend as they lost five straight games at the San Diego Classic. A lack of run support combined with costly errors sealed most of the games this weekend.

Starting off with a tough loss to Oregon State University (12-8), CSU could never get its offensive momentum going. As the bats went quiet, fielding became an issue as the Rams recorded six errors over their first three games of the weekend.

“You expect to have maybe one or two players get into a little bit of a funk sometimes,” coach Jen Fisher said. “But we were literally all in it for four games there.”

The first game was a pitchers duel between Bridgette Hutton and the Beavers’ Meehra Nelson, as Hutton pitched a full eight innings, allowed no runs and still got the loss. The Rams had runners on first and third in the bottom of the first, but after what coach Fisher thought was a controversial call in the third, the Rams never threatened again in the 1-0 loss.

“We got called for leaving early at first, we would’ve had runners on first and third with no outs,” Fisher said. “We thought there was a questionable call, but we have to play in the way that we don’t need every call and I think that kind of stopped the momentum we had.”

After the international tie breaker rule put a runner on second in the top of the eighth, Oregon State’s lone run came from a Jordan Acosta error in left field. While the Rams also got a runner set in scoring position, they weren’t able to get the runner across as the top of the lineup went down in order.

The Rams’ next game against the University of San Diego (11-10) wasn’t any better from the Rams at the plate as they only managed five hits and two runs, both of which were unearned. Kaylynn Pierce and Lauren Petakoff surrendered six runs over the first five innings, two of them unearned. Ultimately, Pierce received the 7-2 loss and Petakoff gave up her first earned run of the season.

In the third game of the weekend, CSU looked ready to break out against Boston University (6-6). The Rams put five of their first six runners on base and scored two runs in the first inning, before being shut out for the rest of the game.

That became problematic when the Terriers scored three unearned runs to take a 5-2 lead in the bottom of the fifth. Those were all the runs BU needed in the 6-2 victory. Coach Fisher thought the team’s offensive struggles may have seeped into their defensive game.

“What I haven’t seen from our team (before) was the tighten up defensively when the offense wasn’t going,” Fisher said. “So that was a big difference this weekend…they kind of carried their offensive struggles over to defense a little bit.”

Those struggles continued later into the day as the Rams lost 3-1 to California State University, Northridge (8-12). The Matadors scored three runs within the first three innings and the Rams failed to get anything to match as their lone run came on a Lauren Buchanan single in the third.

CSU’s last game of the weekend was arguably their best as they played No. 20 Minnesota (12-7). Hannah McCorkhill played a part in all three of the Rams’ runs in the bottom of the second as she got CSU on the board with a two RBI double and scored on a wild pitch. However, they did not mount anything else in a 5-3 loss.

Kendall Lindaman started a comeback for the Gophers in the top of the fifth with a three-run home run to centerfield. The Rams came back and threatened to score in the fifth with runners on first and second, but ended the inning on a fielder’s choice to third.

Minnesota’s completed the comeback in the top of seventh when Sydney Dwyer hit an RBI double off Larissa Petakoff who had just entered in relief of Hutton. Hutton gave up four runs in six innings, as Petakoff could not stop her last runner. The Gophers got one more after a single scored Macy Gill to wrap up the 5-3 win.

Going into a big home tournament next weekend, the Rams will look to bounce back after the dissappointing weekend.

“We’ve got to work back into our confident selves and our approach to the plate,” Fisher said. “We’re a little bit young and a lot of our top hitters went into a funk at the same time…I think a lot of it is a little bit mental and a confidence issue…The way this game is built, if you don’t have a short memory, it’s really a tough game.”

The Rams’ next slate of games will be from March 9-11 at home in the Colorado State Classic.

Collegian sports reporter Mack Beaulieu can be reached at sports @collegian.com or on twitter @Macknz_James.