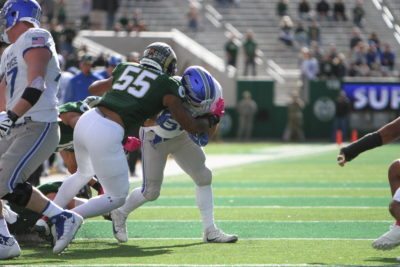 Linebacker Josh Watson (55) brings down an Air Force running back during the first half of Saturday's contest with Air Force. (Tony Villalobos May | Collegian)

A rebuilt coaching staff accompanied by a team in the midst of transition signal new horizons ahead for coach Mike Bobo and a Colorado State defense that resided in the bottom half of the Mountain West last season.

Five new coaches have been brought into the program that hemorrhaged points in the 2017-18 season, with the lowest point being their 59-52 loss at the hands of Boise State in early November.

John Jancek, Keith Gilmore, Eric Lewis and Chase Gibson make up the four new faces on the defensive coaching staff. With Jancek at the helm, Bobo will rely on his reinvigorated staff to reverse the course of their defense in hopes of picking up the slack for an offense that lost its signal caller in the form of Nick Stevens, as well as projected starter Collin Hill, who re-injured his knee prior to spring practices.

“This is like drinking water through a firehose for these kids,” Jancek said. “You have to have a progression of teaching. Our coaches are all very knowledgeable, they’ve got a lot of experience, but it’s really not about what we know, it’s about what the players know and also teaching them in a way that they can grasp.”

The Rams defense allowed 426 yards per game in the final season under defensive coordinator Marty English, highlighted by inconsistencies throughout the season. The lack of prowess on that side of the ball led to the Rams achieving a middling 7-6 record for the third season in a row, a far cry from their 10-3 record in 2014.

On the offensive side of things, the Rams fared quite different, averaging nearly 500 yards a game which put them just outside the top 10 in the nation (11). Led by Stevens and star wide receiver Michael Gallup, the team marched up and down the field with ease in nearly every contest.

The tables have turned coming into this season as the Rams lost both of their offensive stalwarts in Stevens and Gallup as well as bookend-center Jake Bennett, among others. CSU’s offense will be a shell of itself, leading to a heightened importance on early returns from the investment in new coordinator Jancek.

The flip will be forced to come despite the loss of 2017 sack leaders Evan Colorito and Jakob Buys. The cupboard is not bare for the Rams, however, as they do return leading tacklers Josh Watson and Jordan Fogal, as well as ball-hawking corner Anthony Hawkins, who led the team with three interceptions in his sophomore season.

Jancek will look to increase the intensity of the defense as well as implementing a new 4-3 system. Spring ball has brought to light the growth still required by the team.

The change from a 3-4 scheme to a 4-3 will remove one linebacker from the mix, a task that has yet to hinder the mindset of defensive leader, Watson.

“I’m still stopping the run, still inside, it’s just a more run gap defense,” Watson said. “I just think that as long as we’re able to flow and see our keys and read our keys and know what we have in front of us, we can play a lot faster.”

Reading and reacting will play a vital role if the Rams hope to improve on their three consecutive seasons playing chicken with the proverbial .500 mark in the win-loss columns.

After forcing a grand total of 18 turnovers, the Rams must be in search of a mark that can translate to short fields and extra possessions for an offense built around a running game that will be led by several returning bodies.

With the loss of both of their quarterbacks, the defense will be called upon to step up and aid whoever finds their way under center for the team following the addition of transfer K.J. Carta-Samuels, adding to an already jumbled quarterback room in search of a starter going into the season.

Jancek faces a steep test, one that will determine whether the Rams can reach seven wins again.