Pair of Rams to compete overseas for CSU volleyball 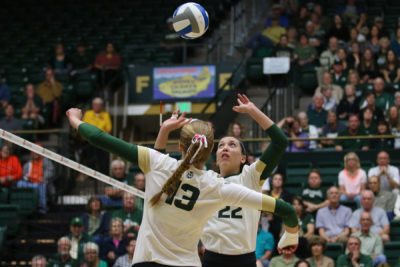 After a successful year playing for Colorado State, a pair of Rams volleyball players will compete for the United States overseas on their collegiate level squad.

Setter and Mountain West player of the year, Katie Oleksak, as well as her running-mate in the middle, Kirstie Hillyer, will compete for the U.S Women’s Collegiate National Team on their European tour this summer. The tour will begin in Venice, Italy on July 5 with friendlies against fellow competing countries before heading to Croatia for the Global Challenge beginning on July 10.

Both players played pivotal roles for a Rams team that went 29-4 last season before being eliminated in the second round of the NCAA Tournament. Hillyer struggled with a knee injury suffered in a sweep of then-ranked Florida State. Despite the injuries, Hillyer posted 256 kills on a .383 hitting percentage.

Serving as the Rams’ distributor, Oleksak had a career year with 1,385 assists and played in every single match for the team. The stellar season led Oleksak to be named the best player in the conference in only her sophomore season.

Both players will be returning to lead the Rams once again following their stint playing for the national team. The two will also be the only players to be named to the team from the state of Colorado.

After graduations of Jasmine Hanna and Sanja Cizmic on the outside as well as Alexandra Poletto in the middle, the Rams will be even more reliant on Hillyer to improve on her previous success, which will only be helped by a stint with national team coaching.