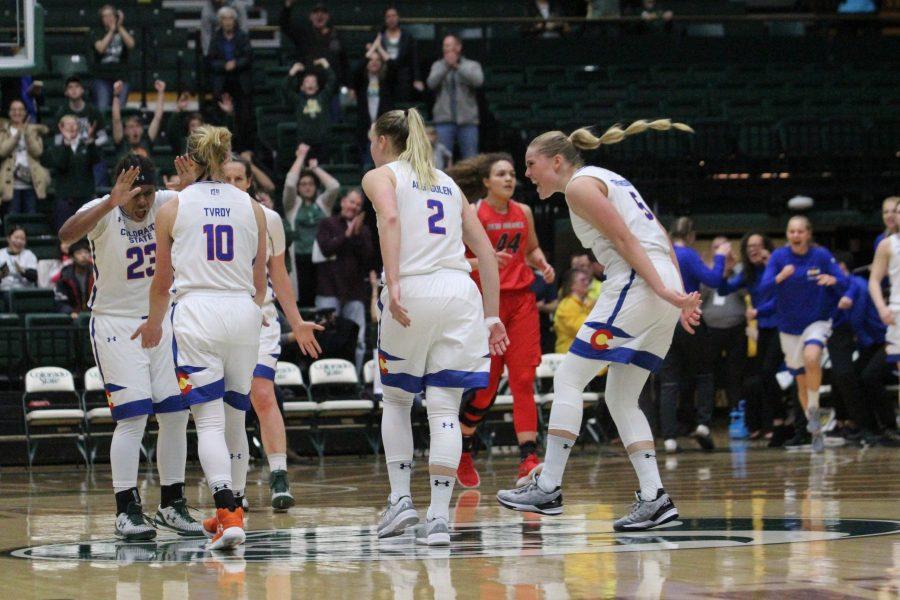 When the Colorado State women’s basketball team takes the floor against Nevada Saturday afternoon, they will be playing for their home fans, a top seed in the conference tournament and for three seniors playing their final regular season game at Moby Arena.

“You want to win that game, of course, for your seniors and make sure they have a positive finish to their career in Moby,” CSU head coach Ryun Williams said. “Moby is a special place. They think so, they know so, so to get a W is huge and everybody knows it. The underclassmen know it, the coaches know it.”

CSU’s senior trio of Stine Austgulen, Veronika Mirkovic and Hannah Tvrdy has started all but two of the Rams’ 26 games this season. Though the veteran triad will likely start again on Saturday, hearing their names announced in the starting lineup has not always been a given.

“The thing I’m really proud of this group is they all were patient,” Williams said. “They kind of had to wait their turn. Those three seniors – they sat plenty of minutes on that bench and that’s hard to do. I have great respect for those three and how they handled it.”

Cracking the starting lineup on a consistent basis has not simply been a matter of seniority for CSU’s tenured trio. Each had to earn and learn their way to the top of CSU’s talent-laden roster.

Vying for playing time often yields tension and tenacity among teammates; but for these three, the journey from the bench to between the baskets has only strengthened the bonds between one another.

“Us three, we’ve kind of been through the good and the bad together,” Tvrdy said. “Our first year here we joked around how we were always on the blue squad, the practice squad.”

Even as mainstays in the starting lineup, Tvrdy and her fellow seniors continue to look back fondly on their blue days on the bench.

“We still kind of make jokes like, ‘Hey we’re the blue squad,’” Tvrdy said. “Where we’ve come from to now that we’re all seniors and finally doing this together is really special.”

Now fixed in the starting lineup, the Rams will surely miss these seniors’ presence, on both the offensive and defensive ends, when they take the Moby Arena floor again next season.

Throughout her career, Austgulen has been a threat to score whenever she sees the floor. Her 46 percent mark from deep this season is on track to break the CSU single-season record set by Vanessa Espinoza in 2003-04 (45 percent).

“Stine’s (Austgulen) been maybe the steadiest player we’ve ever coached here,” Williams said. “The way she’s shooting the ball, she’s been one of the better shooters we’ve had here so we’re going to miss that.”

On the defensive end, Tvrdy’s tenacity has set the standard for how to compete at the collegiate level.

“Tvrdy’s one of the toughest competitors we’ve had and she too defends so we’ll miss that grit and toughness from Tvrdy,” Williams said.

Improving throughout her career on both ends of the court, Mirkovic has emerged as a steady two-way player for CSU.

“Veronika (Mirkovic) has probably been the most versatile kid in that group,” Williams said. “She’s kind of a post player that can guard all five spots on the floor. She’s an extremely valuable piece defensively and she can drive the ball. They’re good players and we’re going to miss them all.”

Before their departures becomes palpable, CSU’s seniors are set on leaving it all on the court down the stretch and making their final season one to remember.

“I don’t want to leave with any regrets out there,” Tvrdy said. “With the game (last) Saturday, I am just still so frustrated with that because I feel like I left something out there…I want to learn from that game and in these last three games and in the tournament, I just want to give it my all because this is my last basketball ever.”

Tvrdy, Mirkovic and Austgulen will play their final regular season game at Moby Arena against Nevada on Saturday at 2 p.m.