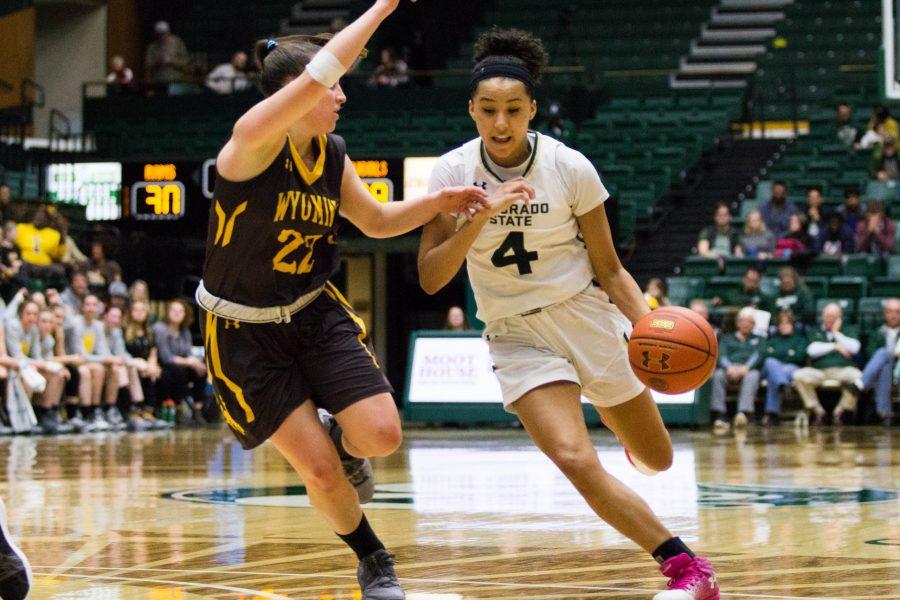 Jordyn Edwards sprints around a Wyoming player during the Border War game at Moby Arena on Jan. 13. The Rams fell to the Cowgirls 53-49. (Ashley Potts | Collegian)

The climb continues for a Colorado State women’s basketball team that is looking to gain more footing in the standings and bring home another Mountain West regular season title.

After another undefeated week, the Rams have brought themselves within two in the loss column of the conference-leading UNLV Rebels. A win over then conference-leader Wyoming boosted the Rams’ hopes of repeating as champions and brought them within a virtual tie of the Cowgirls in second place.

Playing host to the Falcons Wednesday night, the Rams are presented once again with an opportunity to improve their record over the lowest team on the conference totem pole in Air Force.

In the first of the two meetings, the Rams edged the Falcons by a single point, overcoming one of their most turnover-laden games of the year to date. With the two squads totaling 44 turnovers in the first matchup, both will be looking to improve their cleanliness on the court.

The Falcons also excel in converting their forced turnovers into points as the Rams came to find out in their early January game in Clune Arena. Transition defense will be key for a Rams team that consistently sends players back early, leaving only a portion of their lineup to crash the defensive glass.

A team that features smaller and more agile lineups, the Rams will tread the delicate line between fast and out of control against AFA.

“It can be difficult, but we usually keep our tempo going pretty well,” guard Jordyn Edwards said. “We keep making good passes to get into the flow of our offense and we usually (succeed) through that.”

A benefit that the Rams did not have in the first game will be the hot streak of senior Hannah Tvrdy. Despite only scoring two points in their first matchup, Tvrdy has caught fire, averaging nearly 20 points per game in the Rams’ four-game win streak. The backcourt will also be boosted with more minutes from standout Grace Colaivalu who barely cracked the decade plateau in minutes against the Falcons in their previous battle.

“We’ve just been getting better each week,” forward Annie Brady said. “It doesn’t matter who we’re playing, our focus is playing better than the game before as a team. That’s our expectation every game.”

After a .500 record in their first six conference games, the Rams have gone 5-1 since. The hot streaks come at the hands of multiple players including Tvrdy and Colaivalu as well as sharpshooting redshirt senior Stine Austgulen who continues to flirt with 50 percent from beyond the arc, a team-high.

On the defensive end, the game plan is more of the same for the Rams who continue to rank highly in the nation in opposing field-goal percentage and held the Falcons to a mere 39 points earlier in the year.

The matchup will take place in Moby Arena on Wednesday night, the Rams’ one and only home game of the week before heading to San Jose to duel with the Spartans. Tip is 7 p.m. against the Falcons.