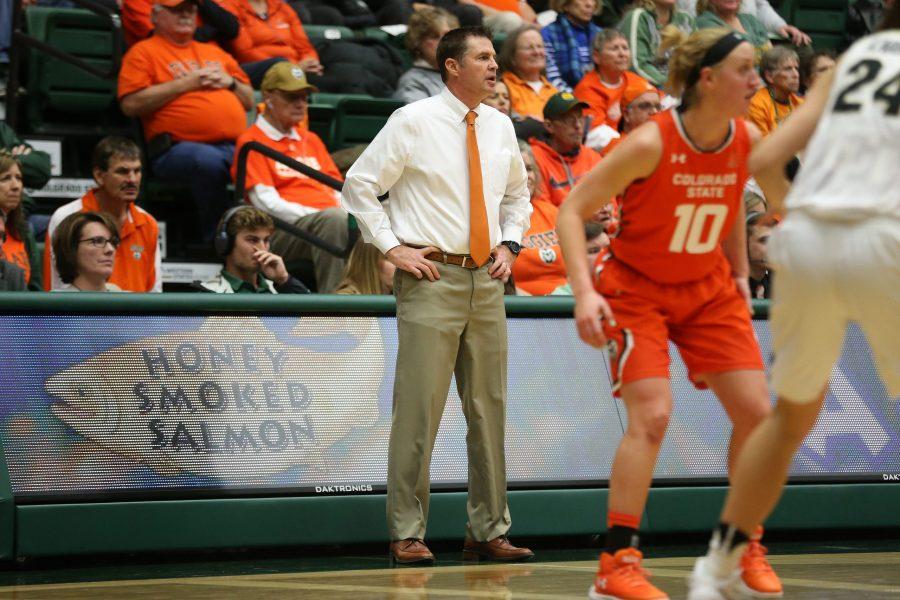 Colorado State Woman's Basketball Head Coach Ryun Williams looks out on to the floor during the final minutes of the third quarter against the Colorado State Buffaloes on Dec. 6. The Rams fell in a hard fought battle 70-67 in Moby Arena. (Elliott Jerge | Collegian)

In his sixth season donning the green and gold, Colorado State women’s basketball head coach Ryun Williams is alone atop the program’s all-time wins record with 130.

Wednesday’s record-breaking win in Wyoming will likely be remembered for Williams’ milestone achievement. To the head coach himself, though, a record win feels just as significant as the 129 before it.

“It (the record) don’t mean squat to me, alright,” Williams said. “We just got to coach every possession like it’s the most important possession and all that other stuff gives people something to write about.”

Most coaches might take a moment to bask in their achievement, but considering the success that’s followed Williams through every stop along his 20-plus year coaching career, this isn’t the first record he’s shrugged off and it likely won’t be the last.

Williams kicked off his coaching career at Sheridan College in his home state of Wyoming. Before jetting off to Division II Wayne State, the head coach earned Region IX Coach of the Year honors and was named Wyoming Conference Coach of the Year twice.

Within a decade at Wayne State, Williams led the Warriors to two Division II NCAA tournament appearances and set the all-time programs win record with 180. Prior to the 2008-09 season, Williams took the head coaching reigns at his alma mater South Dakota, racking up a 76-47 record, featuring two 20-win seasons and the program’s first Division I WNIT appearance.

Accredited and acclaimed, Williams took over the CSU program in 2012-13. In his first season at CSU, the Gillette, Wyoming native finished in the bottom half of the conference standings with a 7-9 record. Williams’ initial season presiding over the Rams serves as an anomaly, as he earned his first of two Mountain West Coach of the Year honors in his next season behind the CSU bench.

Since 2013-14, the Rams have taken down four consecutive conference titles and a 71-13 Mountain West record.

“In the four years I’ve been here, defense has always been what we’re about,” CSU redshirt senior and reigning Mountain West Offensive Player of the Week Hannah Tvrdy said. “I think that’s kind of engrained in all of our minds.”

Before arriving at CSU, Williams coached Summit League South Dakota into a top-10 defense in the nation. At CSU, that same defensive philosophy turned the Rams into a perennial Mountain West powerhouse.

“Defense is important,” senior Stine Austgulen said. “It’s won us a lot of games and some championships.”

For much of Willliams’ CSU tenure, a stellar offense, featuring a fleet of all-conference contenders, often overshadowed the Rams’ defensive effort. With the departure of stars Elin Gustavsson and Ellen Nystrom prior to the 2017-18 season, the Rams’ defense is playing a leading role in carrying CSU back to the top of the conference.

Though defense is Williams’ strong suit, players also commend his ability to come up with unique game plans for each opponent.

“He always comes up with a really good game plan,” Austgulen said. “Some people you’re going to guard on the 3-point line because they’re shooters and some you’re not. He’s really smart about it and that’s been important for us.”

While finding flaws in the opposition, the CSU head coach also has a knack for maximizing his own player’s potential. Even on a roster that he admits doesn’t feature an all-conference caliber player, Williams manages to put his players in positions to succeed.

“He’s smart, he knows how to play us,” Austgulen said. “Ever since I got here, we haven’t had like a super tall team, like a big post or anything like that. But he knows how to use his players to kind of play differently in the post. I think he’s really good at getting the best out of us.”

With consistently strong defenses and educated game plans, it’s no coincidence that Williams’ arrival at CSU coincided with the Rams’ first regular season conference championship in over 10 years. But even a winning coach like Williams takes limited credit for the era of success he’s helped usher in.

Williams will seek win 131 when the Rams head to Nevada for a 3 p.m. showdown on Saturday.