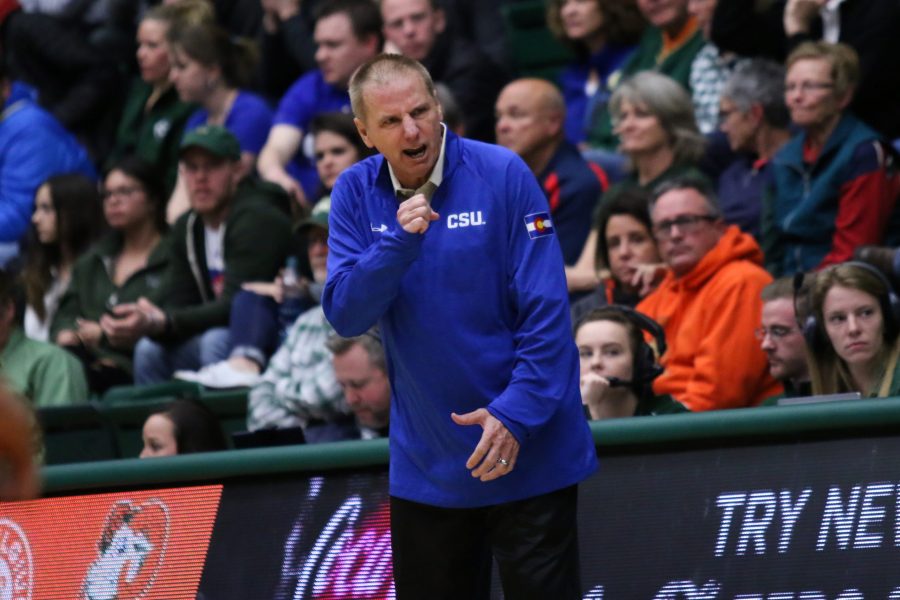 Larry Eustachy reacts to a call during the Rams' double-overtime loss against Wyoming on Feb. 1. (Jack Starkebaum | Collegian)

Editor’s note: A previous version of this article referred to Eustachy’s resignation as a dismissal by the University on one instance. The article has since been updated.

The embattled head coach and university parted ways following a second investigation into his conduct in the last five years. Eustachy will receive the remainder of his salary this year as well as a $750,000 settlement, divided into three payments of $250,000 through 2019.

“I am grateful for the contributions coach Eustachy has made to the Colorado State men’s basketball program and for the time we have worked together,” Director of Athletics Joe Parker said in a statement. “In turn, I understand and support Larry’s interest to shift his energy toward opportunities beyond his tenure at CSU.”

The resignation is believed to come in light of Eustachy violating a zero-tolerance policy put in place during the 2013-14 season in regards to his behavior towards members of the men’s basketball program. Since Eustachy resigned, though, there were no final conclusions made from the climate assessment.

Eustachy’s base salary this year was $985,012, increasing annually through the end of the contract in 2020-21 to $1,045,302. The contract, originally signed in 2013 and extended in 2016, laid out specifics for termination of the contract from both sides. Had the university terminated the contract without cause, it would have owed the coach the remainder of this year’s pay plus three times the base salary, totaling over $3 million.

Matt Stephens reported that the decision to fire Eustachy was made on Thursday, Feb. 8, with the only delay stemming from future decisions on the settlement amount.

On the same day, athletic director Joe Parker announced that the collection of data from the assessment was nearly complete, pending a conversation with Eustachy. Despite collecting the necessary data to make a decision within eight days of the beginning investigation, the process continued for an additional 18 days.

“It has been an honor and a privilege to serve as Colorado State’s men’s basketball coach the past six seasons,” Eustachy said in a statement. “The players, fans and administration, including President Tony Frank, have made my time in Fort Collins an incredible experience.  I am extremely grateful for my time here – there are so many positive memories I will take with me.”

In May of 2017, the Coloradoan revealed that records from a 2013-14 investigation showed Eustachy created a culture of fear and emotionally abused his players. After leading the investigation, former athletic director Jack Graham recommended that Eustachy be fired with cause.

Instead, the university required Eustachy to attend a series of anger management programs and placed him on a zero-tolerance policy in regard to his behavior. The policy prohibited Eustachy from throwing, punching or kicking objects or using “direct profane, derogatory, and/or demeaning language” towards or in the presence of any members of the men’s basketball program.

Initially reported by former Collegian sports director Justin Michael on January 30, all but two players spoke out against Eustachy during the opening phases of the investigation. Joe Parker confirmed that a climate assessment was ongoing January 31.

After coaching the Rams in a double-overtime loss to Wyoming during the investigation, the university placed Eustachy on paid administrative leave on Saturday, Feb. 3 for the conclusion of the assessment. Associate head coach Steve Barnes took over head coaching duties for the Rams’ losses against Nevada and Air Force.

The saga continued on Thursday, Feb. 8 when players boycotted practice. In addition to their frustration with the lack of communication between them and the athletic department, sources say that some players were upset Barnes was named interim coach.

After the boycott, players met with Parker in person the next day to discuss the assessment. Prior to the team’s game on Saturday, Feb. 10, Parker also placed Barnes on administrative leave. Second-year assistant coach Jase Herl took over as the interim coach for the remainder of the assessment.

“Our student athletes have expressed concerns to us and we are working with them to address those concerns,” Parker said in a statement on February 8. “Student athlete welfare has always been our top priority.”

Throughout the process, Eustachy’s coaching tactics were highly disputed. Former Ram and Mountain West Player of the Year, Gian Clavell, repeatedly voiced his support for Eustachy on social media, as did a plethora of former Rams and former Iowa State player Marcus Fizer.

Current Rams Prentiss Nixon, Raquan Mitchell and Anthony Bonner were the most vocal in their support for Eustachy, both on social media and in person.

Prior to his time at CSU, Eustachy resigned from Iowa State after photos surfaced of him drinking and partying with college students after a loss in 2003.

Eustachy will end his career at CSU tied for the second most wins in program history.