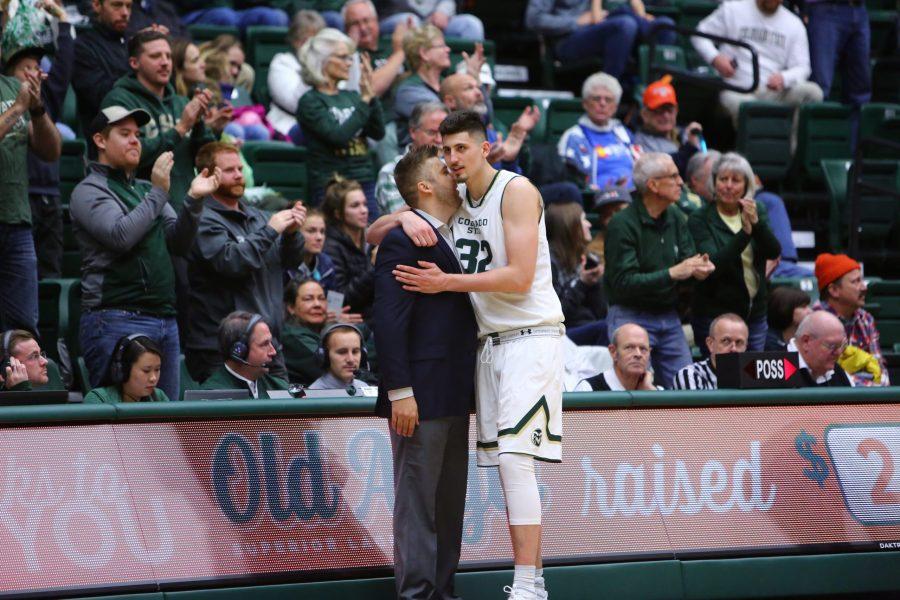 A second interim head coach in just over a week means that something is bound to change. Everyone is different, and that includes coaches who will all teach the game in varying ways.

This time taking the helm was 30-year-old assistant coach Jase Herl. The young coach’s message before the 90-79 victory over San Jose State Saturday afternoon was simple: have fun and play like you have since you were a kid.

“Before the game the exact words he said, ‘Go out there, hoop, have fun.’ He said, ‘Don’t look at the bench unless I call your name,’” guard Anthony Bonner said. “Before the game we were like, ‘Man, we are just playing pickup with subs, let’s get out and get going.’”

“Everybody started playing the basketball game for the same reason,” Herl said. “You go out there because you get to play with your friends and you get to have fun so that’s what we wanted it to be and I don’t need them looking at me asking what’s next.”

That message of being loose and focusing on the game might have caused a change in the Rams’ offense with shot selection and pace of play. CSU came out of the gates firing from beyond the arc compared to the drive to the basket style that Larry Eustachy and Steve Barnes preached. The only Ram to not attempt a 3-pointer in the first half was Lorenzo Jenkins.

As a team, CSU shot 36.4 from the arc in the first half which helped them grab a 46-40 lead at halftime. Bonner led the assault by knocking down three of them. However, big man Nico Carvacho had the most points with 12 at the break, aided by his nine rebounds and the third made 3-pointer of his career.

The Rams played without much direction from the bench and focused more on playing that “pick-up” style described by Bonner. The redshirt sophomore seemed to enjoy the freedom as he finished with 19 points and shot 5-for-8 from the 3-point line.

“I’m feeling a lot more comfortable,” Bonner said. “Just getting out of my own head and playing. Not second-guessing myself, just knowing I have the ability and now I just got to do it and not think about doing it.”

The barrage of 3-pointers would quiet down in the second half, but Carvacho just got started. He picked up 11 boards to finish with 20, tied for the most in one game for his career. He also kept finding the bottom of the net by racking up 14 more points to finish as the game’s leading scorer with 26, a new career high.

Despite ending their seven-game losing streak, the focus on CSU basketball remains the future of Eustachy, and now Barnes, as both coaches are on paid leave. A boycott from Thursday practice from the players occurred in order for the team to voice their frustration with finding out information from the media rather than the athletic department.

“It was just nice because everyone on the team could say what they had to say face-to-face, man-to-man with Joe P (Joe Parker),” Bonner said. “I think it gave us all a better understanding and just help us kind of refresh our minds, be positive.”

“That’s those guys, they got together, they met and they decided what they wanted to decide and that’s that,” Herl said on the team’s decision to boycott practice. “We’ve always known (the guys are close) it didn’t take anything like (a boycott) to know that these guys are together.”

With their voices now heard, the players felt like some weight had been lifted off them, despite finding out that Herl would take over Saturday morning, the second straight week the team found out hours before a game.

Having gone through it before, Bonner and Carvacho both expressed that this adversity is nothing new to them after dealing with the academic issues from last year and Eustachy’s leave last week. Freedom seemed like the key word used to describe their feelings, as the team’s expression all game was one of fun.

And for many of the players, the best part was seeing Juan Sabino II notching his first career points on a corner jumper in the final few minutes of the game. The players sprayed the guard with water coming down the tunnel post-game and followed that up with a shower for coach Herl.

“(The scene in the locker room) was nice for them, it wasn’t very nice for me,” Herl said. “I’m soaked and its cold out and I’ve got about two suits so I got to go get this one dry cleaned on the bye week.”

The bad taste of losing is now out of the mouths of the Rams who face a tough test after their first bye week of the conference season. CSU will take the court next Saturday on the road against Fresno State who they lost to at home in overtime earlier this season. The game is set to tipoff at 5 p.m. MT.