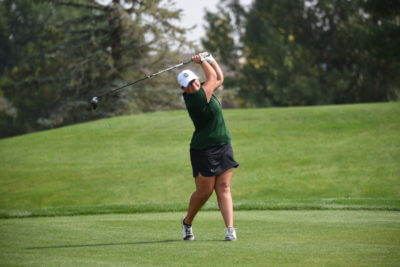 The Colorado State women’s golf team finished the fall portion of its schedule with their strongest team play of the season. Thanks largely to sophomore Ellen Secor, the Rams kept that momentum going into the spring with a third place finish this week at the Gold Rush tournament hosted by Long Beach State.

Secor started the tournament with two hot rounds. While most of the field struggled to approach par on the first day due to high winds, Secor’s strong drives and preparation kept her under par. Tuesday was kinder to most of the girls, but Secor fell behind the University of Idaho’s Sophie Hausmann to finish second overall and the team lost ground to the University of Georgia, the tournament’s eventual champion.

Secor made five birdies in the first round to finish 1-under, even with the wind tossing balls around as she hit a near even amount of pars, birdies and bogeys.

“She took advantage of how far she hits the ball,” coach Annie Young said. “But she’s a good player in the wind, she knows how to flight the ball really well, it’s a skill she’s really been working and she does a good job with that.”

Often the Rams’ top golfer, Katrina Prendergast was right there with her during the front nine of her own first round, but the last three holes tripped her up and she finished the round 3-over. However, Prendergast was fighting a flu-like illness, so her eventual 15th-place finish of 81 golfers was far from disappointing.

“Katrina’s battling an illness right now,” Young said. “I’m just proud of her that she got through the 36-hole day…She battled out there and that’s all you can ask.”

The second round continued to go well for Secor as she got more consistent and impressively shot for par on all but the two shots she birdied. The rest of the team was similar to Secor in that they finished within at least two strokes of their first round score, except Brooke Nolte, who came back from a nightmarish 13-over to shoot a respectable 4-over.

“(Nolte) was in shock,” Young said. “She couldn’t get anything going, but for her to bounce back the way she did was big and we needed that. We needed her that second round and she responded very well.”

That consistency, along with Nolte and Prendergast’s resilience, helped CSU climb up the leaderboard as three of the five teams in front of them plummeted by an average of sixteen strokes. The Rams finished the round with a 16-over par 592, just one stroke behind UGA.

As a team, the Rams had their worst day of the tournament, but stayed respectable and managed to only drop one spot on the leaderboard as Brigham Young University went four shots up on the Rams to put them into third place at the end of the tournament.

Despite the wind, the illnesses and the shock of a ghastly round, the Rams still secured one of their best finishes of the season. The women will be in action again Feb. 25 as they compete in The Rebel Beach Tournament in Las Vegas, Nevada.

Mack Beaulieu can be reached at sports@collegian.com and on Twitter @Macknz_james.