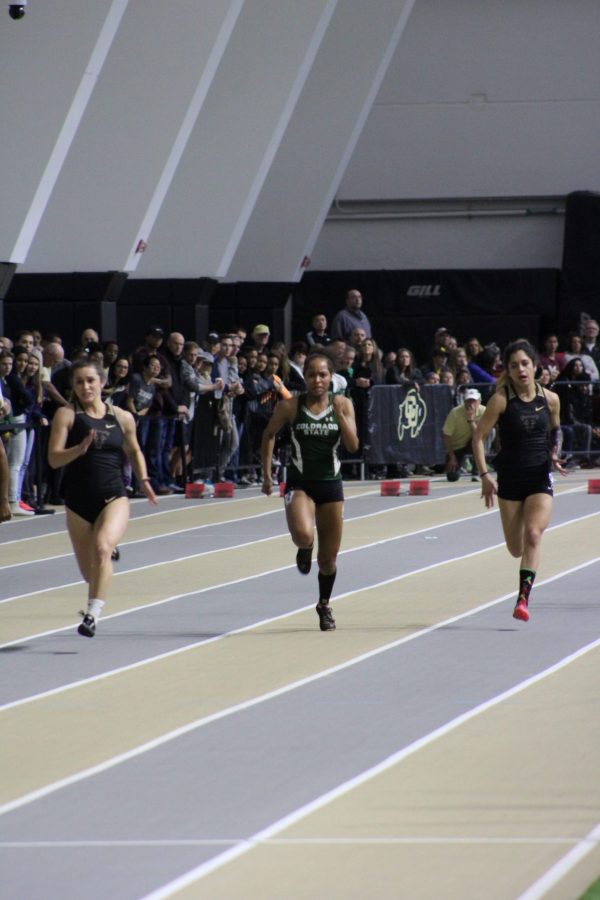 London Evans competes in the CU Open on Saturday, Feb. 3. Evans finished the 60-meter sprint with a time of 7.97. (Megan Daly l Collegian)

In its last stop before the Mountain West Championships, Colorado State track & field tuned up at the Air Force Open at USAF Academy in Colorado Springs, Colo. last Friday.

In the men’s 60-meters, E’Lias Sutton led the Rams with a time of 6.99. Sutton’s time earned him a fourth-place finish. Nathan Gish had the second-fastest time for the Rams, crossing the finish line at 7.164. Gish’s time was just enough for seventh place. Gish was followed by sophomore Will Domier, who placed eighth. Domier’s time (7.170) was just six milliseconds behind his teammate.

Gish and Domier also competed in the 200 meters where they placed second and sixth, respectively. Gish finished with a time of 22.21 while Domier recorded a 22.72.

Junior Blake Yount torched the competition in the 800-meters with a first-place finish. Yount’s time of 1:52 was more than one second faster than the next collegiate runner. Yount, an Aurora, Colo. native, is a transfer student who last competed at the University of Oklahoma before returning to his home state of Colorado.

“We are very excited to add the Colorado high school 800-meters record holder to our roster,” coach Art Siemers said. “Blake will fill a huge need for the Rams in the 800 and his experience in the Big 12 will be a valuable asset.”

In the women’s 60-meters, London Evans led all collegiate runners with a time of 7.88. Evans’ time earned her second place in the event.