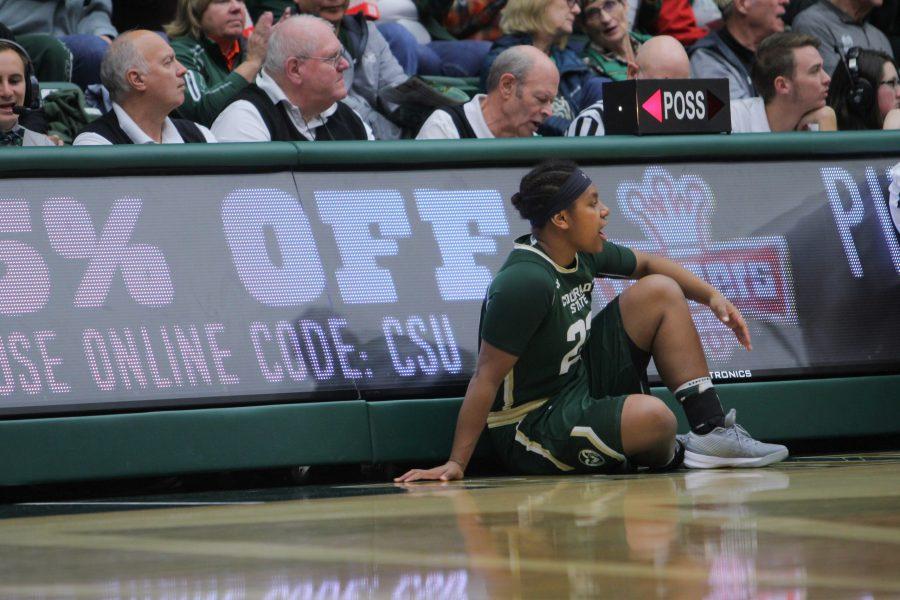 Redshirt freshman Grace Colaivalu awaits to be put in for the first time in the half against Nevada on Feb. 24. (Joshua Contreras | Collegian)

Colorado State women’s basketball was unable to send their seniors out with a bang in their final regular season contest with a tough-luck loss on the road in New Mexico, 54-48.

Led by their defense, CSU held the hosts to a mere 29 percent from the field to open the contest, while forcing seven turnovers in the opening half. The prowess on the defensive end kept the Rams in the contest despite their offensive woes.

“We gave them seven extra possessions because of the turnovers,” coach Ryun Williams said. “That (makes) it an even more outstanding defensive effort.”

The Rams turned the ball over 10 times in the first half themselves.  The carelessness with the ball kept them from extending their lead to double-digits at any point, eventually giving way to a late run. Despite the miscues, they trailed for just over a minute in the half.

The time trailing was a direct result of a 12-2 run by the Lobos near the end of the half, aided by the sloppy ways of the Rams’ offense. They outscored the visiting Rams 7-0 in fast-break points in the first half. The Rams were also held to a mere two points from their bench. The lopsided statistical affair led to a slim lead for the Lobos heading into the locker room, 26-25.

“I told the kids in the locker room to keep doing what we’re doing,” Williams said. “All we can do is keep getting the shots that we’re getting. Our execution is just fine.”

The highlight of the first two periods was the hot hand of senior Hannah Tvrdy. Playing in her final collegiate regular season game, Tvrdy lit up the scoreboard early, registering 11 points on a pristine 83 percent from the field. In the hustle category, junior Annie Brady accrued 10 rebounds in the first half alone with four coming on the offensive end. The boards only translated to two points for the junior big.

Coming out of the locker room, the cold streak continued for the Rams. They failed to score a field goal in the first four minutes of the third quarter, bringing their deficit to six. Insult was added to injury when redshirt freshman Liah Davis landed awkwardly, forcing her to the bench. Unable to put any weight on the already braced knee, Davis failed to touch the floor for the remainder of the game.

Outside of their turnovers, the Rams’ offensive shortcomings were best represented in their lack of assists on their baskets. In the game, they only conjured six assists as a team, one of their worst totals of the year.

“We shot to make it, we drove aggressively,” Williams said. “We’ve just got to convert some more baskets. This is groundhogs day times 10, but that’s just how it’s been.”

UNM junior Jaisa Nunn served as the leading thorn in the side of the visitors as she tallied a double-double with 12 points and 14 rebounds, with eight of her boards coming on the offensive end. Her total aided the Lobos’ domination of the Rams in second-chance points, with 15 compared to only three for the visitors.

The Rams registered single-digit point totals in two of the four quarters on the night and failed to find an offensive rhythm on the road. A late run brought them within shouting distance of the home team, but the Rams failed to capitalize on several open looks in the final period.

Going into the Mountain West Tournament, the Rams will be forced to reverse their course having lost three of their final four games of the regular season, and missing out on a regular season title, a mainstay achievement under the tutelage of Williams.