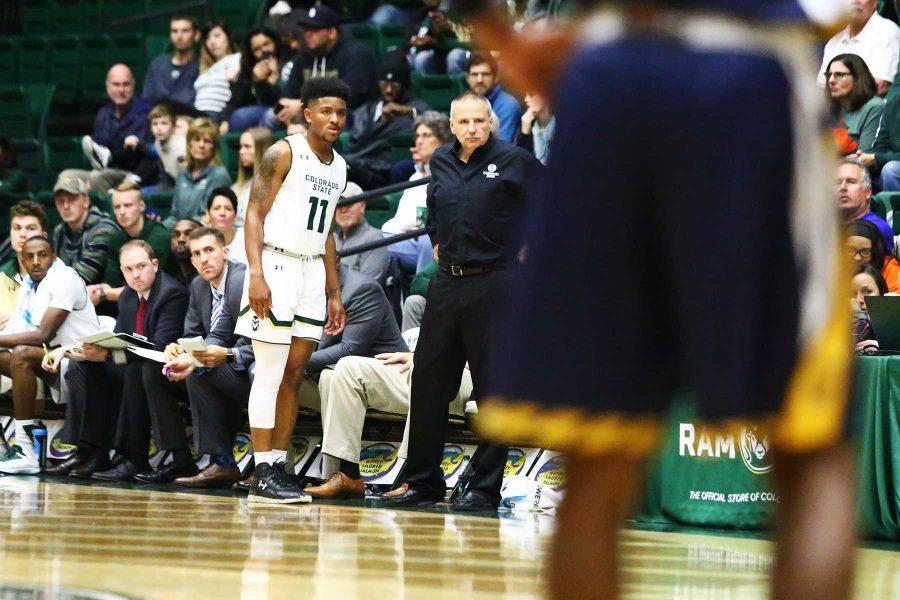 Junior guard Prentiss Nixon (11) talks with head coach Larry Eustachy during a free throw in the first half of the Rams' 83-79 win over UNC. (Javon Harris | Collegian)

From the moment news broke that Colorado State launched an investigation into the conduct of Larry Eustachy and the climate of the men’s basketball program, junior guard Prentiss Nixon has not been shy about voicing his support.

Prior to the Rams’ practice on Tuesday, Nixon once again maintained support for Eustachy.

“Everyone says resign but I think we all really know what happened in this situation. I’m not dumb, none of y’all are,” Nixon said. “It happens, things happen and people get let go or resign or whatever you want to say. But it’s a business at the end of the day, and you’ve got to take it with a grain of salt, move on and still play basketball.”

After hearing the news of Eustachy’s resignation on social media, Nixon reached out to his former head coach, the man who he says is responsible for much of his development as a player.

“I texted Coach (Eustachy) yesterday and I just told him that I appreciate everything he’s done for me,” Nixon said. “He gave me the opportunity to play Division I basketball when a lot of teams didn’t think I was good enough to do it. I love the guy like another father, I wish him the best.”

Nixon is not the only player to be vocal in his support of Eustachy over the past month. Sophomore guard Anthony Bonner echoed his teammate Tuesday afternoon, reiterating his love for the former head coach.

“Coach (Eustachy) was always 100 with us every day, day-in and day-out,” Bonner said. “He always kept it real, always tried to push as hard as he can and he’ll always be one of my favorite coaches I’ve ever had.”

Following the turmoil, the question turns to the future of current CSU players. Forward Che Bob will be the lone senior represented on Senior Day when the Rams host New Mexico Wednesday at 7 p.m.

With so much fluctuation in the coaching staff and uncertainty following the program’s future, though, next year’s roster is certainly on unstable ground. Bonner, who said Tuesday that every coach who recruited him at CSU is now gone, is doing his best to look at the bigger picture.

“It’s just one of those things you’ve got to handle in life. Especially in college sports, it happens all over the country,” Bonner said. “Just trying to look at the bigger picture and be there for each other, win some games.”

Along with the leadership of interim head coach Jase Herl, Bonner says that the “team together” approach among the players has made focusing on basketball easier.

Still, it has not stopped players from realizing the harsh reality that comes with college athletics.

“I’ve learned that it’s a business,” forward Nico Carvacho said. “From here in college throughout NBA, pro, throughout the rest of my life, everything’s going to be a business. It’s a good learning lesson for sure.”

Though their futures in the green and gold are ambiguous, The Rams are focused on finishing the season strong. With outside distractions now settled, they can turn their attention to the Mountain West Tournament.

No stranger to adversity, Bonner and the Rams know as well as anyone how to move forward.

“One thing Coach (Eustachy) always did teach us was just fight through adversity,” Bonner said. “No matter what life throws at you, you’ve just got to keep pushing. That’s everyone’s mindset right now.”

Collegian sports director Colin Barnard can be reached at sports@collegian.com or Twitter @ColinBarnard_.