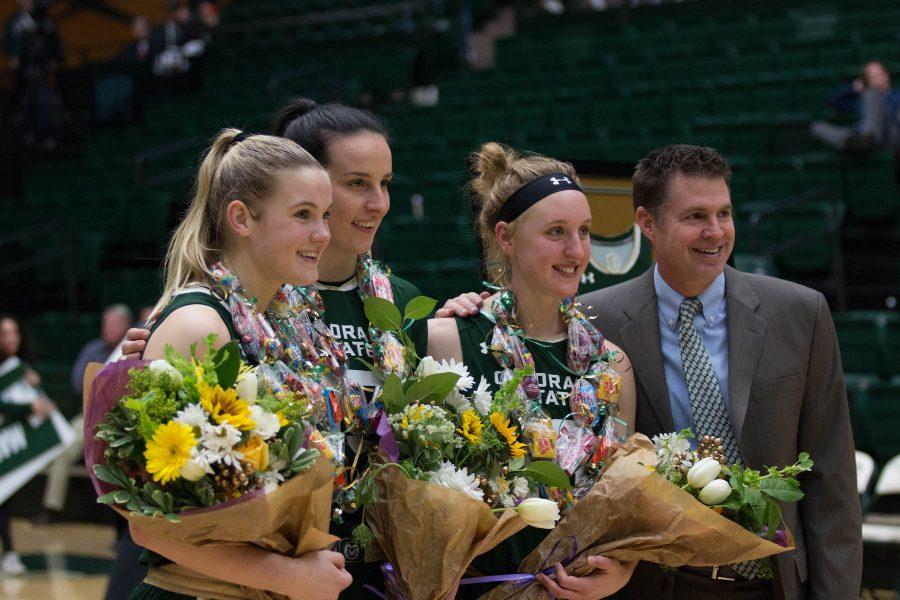 Stine Austgulen, Veronika Mirkovich, and Hannah Tvardy with their coach Ryun Williams after their last home game of their careers at CSU. (Julia Bailey | Collegian)

Thanks to a season-high 21-point, 10-rebound performance from Annie Brady and another productive night from senior and leading scorer Hannah Tvrdy, CSU’s senior trio stepped off the Moby Arena floor for the final time as 75-64 victors over the Nevada Wolfpack on Saturday afternoon’s Senior Day.

After an extended pregame to honor the Swede Veronika Mirkovic and the Norwegian Stine Austgulen with their native National Anthems, the excitement in Moby Arena for the final regular season game grew tangible and only amplified after a strong start from the home team.

While Ram fans rose to their feet, senior Austgulen nailed a jumper from the top of the key on the game’s first possession. Before the Ram faithful found their seats, fellow senior Mirkovic sent Moby Arena back into frenzy by laying in a bucket on the Rams’ next possession.

“We always notice the crowd and we surely felt them today,” CSU head coach Ryun Williams said. “When we saw some momentum and made some good plays, we could really feel the crowd, hear the crowd and that’s what Moby Madness is all about.”

Coming off a dismal shooting performance earlier this week at Boise, in which the Rams shot just 29 percent from the field, CSU looked poised to flip the script by converting from the field on their first three offensive possessions. The Rams finished the quarter shooting 57 percent and the game with a 48 percent mark from the field.

“We were due to maybe make a few more baskets than we have been making,” CSU head coach Ryun Williams said. “I thought the first quarter- the kids came out really aggressive, hit some nice pull-ups and hunted their shots against a Nevada team that was going to guard them tough.”

Before the sharpshooting Rams could take control of the game early, Camariah King and the Wolfpack lit it up from 3-land to level the game at 16 after one quarter. While the home team went fruitless in the opening minutes of the second quarter, Nevada mounted a 23-16 lead, their largest lead of the afternoon.

Senior guard Tvrdy snapped the Wolfpack’s 7-0 run with her first make from deep, followed by two more 3-balls from Sofie Tryggedsson and Stine Austgulen on consecutive possesions. The Rams and Wolfpack exchanged buckets throughout the second stanza, until Tvrdy and the Rams ended the half on a 7-0 run of their own.

Although Saturday’s game was dedicated to the seniors, junior Annie Brady stole the show from the start of the second half to the final whistle. Off the bench, Brady posted six points in the first half, but led the Rams in the third quarter with nine points and four boards.

“This was an Annie (Brady) type of game- athletic, strong, explosive and powerful,” Williams said. “Annie was huge today. She’s been playing good basketball for us and this was a good matchup for her.”

Almost as significant as her offensive output, Brady flashed her strength and explosiveness numerous times down the stretch by fighting for rebounds that extended Rams’ possessions and halted any of Nevada’s late game momentum.

“This is the time of the season to start stepping up,” Brady said. “We’ve got a lot to accomplish still this season and we have a tournament to get ready for and I think that’s on everybody’s mind.”

Behind Brady’s breakout third quarter, CSU extended its lead to six heading into the final 10 minutes. Without missing a beat, freshman Lore Devos rolled in a quick basket and then raced down the court on the ensuing defensive possession to block a King layup, earning a roar from the Moby Arena crowd. Nearly matching the ovation from Devos’ big block, Tryggedsson sunk her third 3-ball to go up 11 and the Rams wouldn’t look back.

Before the final whistle sounded on a 75-64 win, Williams subbed out each senior for the last time in a regular season game to a standing ovation from the 1747 fans packed into Moby Arena.

“It’s definitely emotional,” Tvrdy said. “I was just tearing up during warm-ups, it was crazy, but having a huge team win is awesome…We needed it (to win) after those two heartbreaking losses, we knew we wanted to end that little streak. It was huge, a lot of people played well, our confidence is rolling again and we needed that heading into New Mexico and Vegas.”

The Rams wrap up the regular season on Tuesday at 7 p.m. in New Mexico before heading out to Las Vegas for the 2018 Mountain West Women’s Basketball Championship on Monday, March 5.