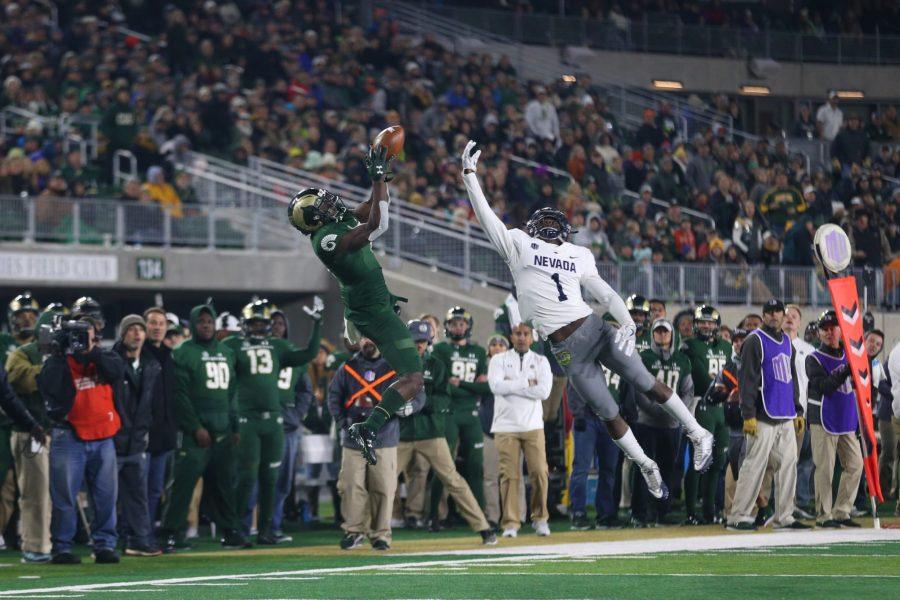 Senior Michael Gallup makes a catch during the second quarter of action against the Nevada Wolf Pack. (Elliott Jerge | Collegian)

Bittersweet goodbyes and record-breaking events filled the headlines of Colorado State sports in 2017. From buzzer beaters to heartbreaking losses, the Rams gave fans a mixed bag of emotions across all sports this year. Here are the 10 most memorable moments from 2017.

CSU women’s soccer tied the then No. 25 Colorado Buffaloes to open their 2017 season, their best performance against a top 25 team. The start sparked the Rams to win four games in 2017, the most they have had in the fifth year of the program.

Haley Hutton breaks CSU softball career records in runs scored (190), walks (118) and batting average (.384). She also came one hit shy of tying the Rams record for hits in a career with her 251 knocks and she also finished fourth in stolen bases with 48 career swipes.

We start with the best club sports moment of the year because every Ram fan enjoys a victory over the hated Colorado Buffaloes. CSU’s club hockey team gave fans this feeling back on Nov. 14 when CSU went into Boulder ranked 33rd in the country to face the No. 3 Buffaloes. With the Rams down 4-1 heading into the third period, a comeback seemed unlikely.

However, the Rams scored with about nine minutes left in the game, but still could not find a way into the back of the net. With 30 seconds left on the clock, the Rams scored twice to shock the Buffs and force overtime. Neither team scored in overtime and one shootout goal later the Rams were walking away victorious with one of the biggest wins of their season.

9. Michael Gallup dazzles against Nevada in his award-winning senior season

Part of the hype around the 2017 CSU football team was the impact that senior wide receiver Michael Gallup would have and he showed it on Oct. 15. Gallup went for 263 yards on 13 catches with three touchdowns in his best performance of the year.

Gallup was a Biletnikoff Award finalist and was named to All-American teams by pretty much every organization that puts out one. The senior was named to the first-team by the Walter Camp Football Foundation and the FWAA and received second-team honors from the AP and AFCA. He finished the year with 1,413 receiving yards, which was the fourth most in the nation, and seven touchdowns.

Another year, another NCAA tournament for the CSU volleyball team who made the big dance for the 23rd consecutive year. They won the Mountain West for the 14th time by going 17-1 in conference with the next closest team five games behind. CSU also won their first round rematch against the Michigan Wolverines before losing to the Final Four bound Stanford Cardinal.

The Rams also placed six players on the All-Mountain West squads, which is a conference record for most in a single season. Three out of the four conference superlatives went to the Rams as well as they took Player of the Year (Katie Oleksak), Newcomer of the Year (Breana Runnels) and Coach of the Year (Tom Hilbert).

Senior outside hitter Jasmine Hanna has been a namesake for CSU volleyball over the past four years and left her mark in the record book back on Oct. 12. She picked up her record-breaking 1,067th kill at home against the San Jose Spartans and finished her career with 1,214.

The same match against the Spartans also marked a career milestone for head coach Tom Hilbert. The win marked his 700th win as a head coach with over 500 of those victories coming at the helm of the Rams.

CSU cemented its place in the cross country and track and field worlds in 2017 by making national headlines. The spotlight began back at the end of February when both men’s and women’s indoor track teams took home the Mountain West titles in the same year for the first time ever. It also marked the fourth consecutive track and field title for the women’s including outdoor and indoor seasons.

Later in May, junior Mostafa Hassan won the Mountain West in shot put by putting up a conference record throw and he finished second in the nation in the event at the NCAA Championship. He competed in the IAAF World Championships in London over the summer.

Last not but least, the men’s cross country team finished ninth in the nation this fall at the NCAA championship, tying their third best finish in program history back in 1978 and tying for the fifth best finish in CSU sports history. Senior Jerrell Mock led the Rams to their first ever Mountain West title in cross country by capturing his second individual title.

Ellen Nystrom and Elin Gustavsson are names that will never be forgotten in CSU women’s basketball. The two Sweden natives started all four years for the Rams and tied the record for most wins in program history between a pair of players, tying a duo that featured the great Becky Hammon. Nystrom also finished her career as the Rams’ all-time leader in assists.

CSU won four consecutive Mountain West regular season titles under the duo, an achievement that has never been done in Mountain West basketball, men’s or women’s.

The Rams football team came into the year with high expectations behind an explosive and experienced offense. After starting the year 6-2, the Rams lost three straight games to fumble away any chance of obtaining the conference champion goals, but no loss hurt worse than the one to the Boise State Broncos.

CSU led the Broncos 52-38 with 3:02 left in the game as the Rams were looking for their first win ever against Boise State. Instead, the Broncos scored a touchdown with 1:41 left and recovered the ensuing onside kick. Boise State would find pay dirt with 57 seconds left in regulation to tie the game up at 52.

In overtime, the Broncos received the ball first and scored to go up 59-52. Rams senior running back Dalyn Dawkins was out of the game due to injury, leaving freshman Rashaad Boddie to tote the rock. Four plays later, the freshman fumbled on the 3-yard line and the Broncos recovered to escape Fort Collins with a win.

The end of conference play in the 2016-17 season gave Ram fans some of the most exciting moments in CSU men’s basketball history. The Rams were on a five-game winning streak and were looking to stay even with the Nevada Wolfpack at the top of the Mountain West standings when the San Diego State Aztecs came to Fort Collins on Feb. 25.

With the Rams down 53-55 with less than five seconds remaining in the game, senior Emmanuel Omogbo hit a 3-point jumper where the ball rattled between the rim and eventually fell through for the game winner and the Rams’ sixth straight win.

Their seventh win would come three days later in similar fashion when now junior Prentiss Nixon drained a 3-pointer with 3.6 seconds left against Wyoming to lift the Rams to a 78-76 victory. Nixon filled the role of senior Gian Glavell who fouled out with just over a minute left in the game.

Nixon also nailed another buzzer beater this season against Long Beach State to give the Rams a 68-66 victory.

Those regular season 3-pointers helped propel the Rams to the N0. 2 seed in the Mountain West tournament after a season in which their roster featured eight players with only seven receiving real playing time.

The depleted Rams proved themselves again in the tournament by winning games against Air Force and San Diego State on back-to-back days despite having virtually no rest. The championship against Nevada would come less than 24 hours after beating the Aztecs and the Rams held their own.

Despite struggling in the first half and falling down by as much as 16 points, CSU fought back and tied the game up at 51 midway through the second half. Though the Rams lost 79-71, they shattered everyone’s expectations all year.

Once the season ended, CSU had to say goodbye to two of their stars in Omogbo and Clavell. Omogbo was a double-double machine throughout his career while Clavell, the Mountain West Player of the Year, scored at will. Both stars carved a space into CSU men’s basketball history.

Opening the new on-campus stadium might just be the biggest moment ever in CSU athletics.

The stadium had the grandest entrance it could ever have thanks to athletic director Joe Parker moving the Rams’ matchup against Oregon State up to week zero of the college football schedule and also getting the kickoff at 12:30 p.m., marking the first college football game of the 2017-18 season in the entire country.

The flyover in pregame set the tone for the Rams who came out and dismantled their Power Five opponent in the second half by forcing four of Oregon State’s five total turnovers in the second half, including a 44-yard interception return for a touchdown by Tre Thomas. CSU ultimately won 58-27 after a close first half ended with the Rams hanging on to a 24-20 lead.

Senior quarterback Nick Stevens also had one of his

The stadium’s opening acted as a ceremony to usher in a new era of CSU football and while the 7-6 Rams did not inspire fans too much this season, the sense of higher expectations is now present in Fort Collins and they will now have a beautiful home to showcase their expected growth and maybe someday soon, a Mountain West Championship game.