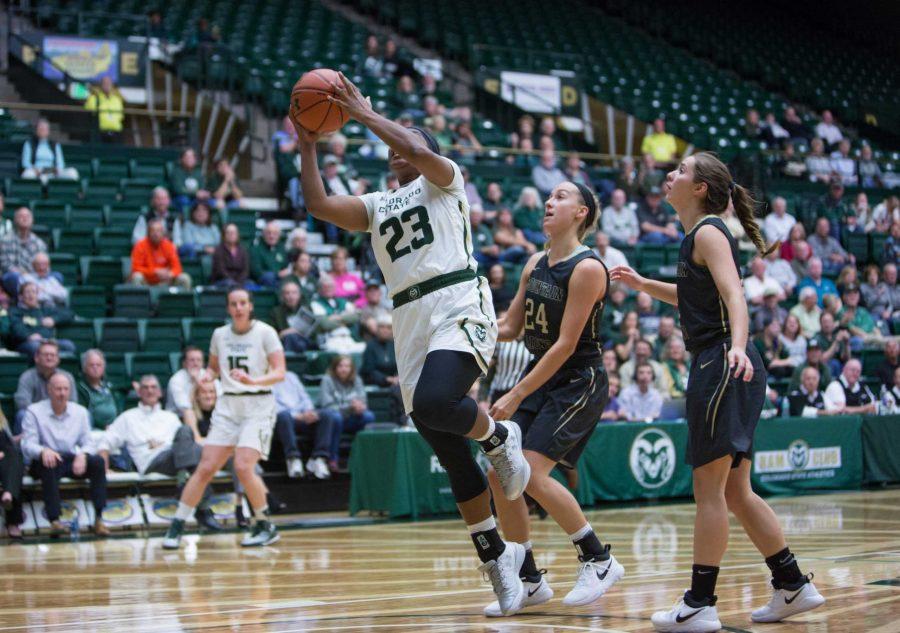 A 4-1 road record and a chance to make up ground in their conference serves as the baggage on the backs of CSU women’s basketball going into a road matchup against UNLV.

The Rebels’ junior-laden squad has them sitting at second in the standings having conjured up a 6-3 record. Though the Rebels are second in the conference, they have a 9-7 record, worse than the Rams, accompanied by a negative scoring margin (-1.8 points a game).

Three scorers for the Rebels are in double digits per game, a feat only present in one player among the Rams. Senior guard Brooke Johnson leads the team with 15.8 points a game, and stands as the leader in minutes overall (577) and per game (36.1).

Johnson has her game play out from both sides of the arc as the leader of the team in 3-pointers and field goals made overall, to be expected with the overwhelming leader in minutes. Alongside Johnson in the backcourt is fellow guard and redshirt junior Nikki Wheatley who is third on the team in points per game (12.4) and second in rebounds per game (8.3).

From the inside, the Rebels boast junior center Katie Powell who is averaging a near double-double with 14.7 points and 9.1 boards a game. With a stature taller than any Rams regular, Powell will be a consistent issue inside for the Rams, and will pose as one of their biggest challenges in gaining ground in the conference.

Stopping the Rebels’ big three will serve as a catalyst if the Rams hope to have success out west against an older team.

With prowess from inside and out, the Rebels pose a unique challenge for the offensively deprived Rams. For a team that is averaging just over 60 points a game, the Rams will be forced to once again rely on their defense to keep them competitive against the Rebels.

In the Rams’ favor is their seven-game win streak against the squad from Sin City. One of their longest win streaks in the conference, the Rams have found a recipe to consistently come out on top against the Rebels, regardless of the two teams’ rosters.

The Rams have dealt with an offensive lull for much of the season and have been unable to regain their confidence. With their only consistent threat from outside being redshirt senior Stine Austgulen, the Rams have been forced to do their damage in the paint.

Redshirt freshman Grace Colaivalu has risen as the cream of the crop on a young Rams squad in search of their identity. As the only Ram above the decade mark in the scoring column (11.3), she has been forced to shoulder the load of the offense, consistently driving and forcing defenses to collapse. Unfortunately for the young guard, her outside shooters have been unable, for a better part of the year, to knock down shots with any regularity.

Despite being behind many of the Rams in minutes, Colaivalu has managed to hoist up the second most shots on the team, hitting over half of them (51.8%). With one of the most successful seasons on the team thus far, Colaivalu has cemented herself as the production leader of the team, and energy source for the offense. Coming off a concussion, she is still looking to regain her full footing after the injury having scored a total of 11 points in her past two games since returning.

Being forced to rely on many things reversing their course, the Rams appear to be entering the latest matchup as underdogs, fighting to keep ground in the Mountain West.

With a Saturday afternoon tip at Cox Pavilion, the Rebels will look to extend their four-game win streak and hand the Rams their first loss against them in the past four years.