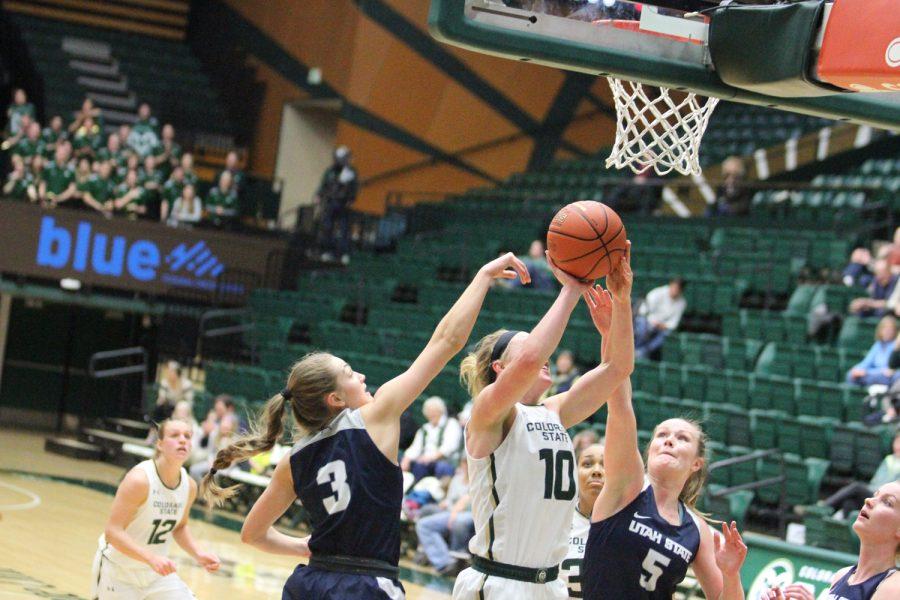 Coming off a short stint on the west coast where they split two matchups, the Colorado State women’s basketball team returned home to Moby Arena in victorious fashion over Utah State, 56-45.

With redshirt freshman and offensive force Grace Colaivalu out with a concussion, the Rams’ offense had plenty of road blocks in route to a win over the Aggies who sit second to last in the Mountain West in the early going.

“We’ve relied on (Grace Colaivalu’s) scoring quite a bit in the conference season,” coach Ryun Williams said. “But some of our biggest wins have been when Gracie didn’t play much… so we’ve done this before.”

Sitting at seventh in the nation in opponent field goal percentage coming into the matchup, the Rams zone stifled the Aggies early and often, limiting their opposition to a mere 10 points in the first quarter on 33.3 percent shooting. Unfortunately for the home squad, the Rams offense only mustered eight points at a 25 percent clip, a direct hindrance to them being able to build an early lead.

A sloppy showing from the beginning, the Rams showed the ill effects of losing the leading scorer through her first four games of any freshman in the Ryun Williams coaching era, Colaivalu.

Back-to-back 3-pointers from redshirt senior Stine Austgulen and junior Callie Kaiser ignited the Rams offense in the second quarter, leading to a lopsided tally of 19-6 overall. Filling in for Colaivalu in the starting lineup, Kaiser imposed her will, leading the Rams turnover-forcing ways with two steals in the first half, adding to the team total of 10 forced turnovers in the opening two periods.

Going into the break, Austgulen led the way for the Rams with 11 points, nine coming from beyond the arc. A consistent leader for the Rams, Austgulen has given the offense life in a relatively quiet season for the team in the scoring department.

“We just kept running our plays,” Austgulen said. “Whatever we’ve been doing when Grace was on the court, we just did the same thing today. We have other really good players who can play in the post too.”

An overshadowing factor in the Rams struggles was a quiet night from junior Annie Brady. A revelation for the team in rebounding and scoring, Brady was held without a point and only a pair of rebounds in the contest.

“They’ve got some strong posts, some posts with really good feet,” Williams said. “Annie’s gotta be more aggressive and I think that was it. We went to Leah and Leah is a really good scorer down (low) and a pretty good decision maker.”

The leader for the Aggies, sophomore Olivia West, who came into the game leading the team in points per game and 3-point percentage, was held ineffective by the Rams zone, scoring only eight total points on a 2-for-7 line from her usual home outside.

The final quarter began with the Rams leading by 16, but slowly dwindled as the offense went cold yet again. In just over two minutes, the Aggies cut the lead in half, eventually bringing themselves within three of the Rams with their 13-0 run in the first six minutes of the final quarter.

“I don’t think (we panicked),” Sofie Tryggedsson said. “We kept pretty calm, and we knew we were a better team and we just had to prove that.”

A drive by senior Hannah Tvrdy ended the run and the Aggies’ chances of pulling off the comeback as the Rams cruised to a 13-5 run of their own in the final four minutes of the game following their scoring outage.

Austgulen finished as the leading scorer for the Rams with 18, playing a complete game and a team-high 40 minutes.

In their next contest, the Rams will welcome their Border War rival Wyoming to Moby for the first of two regular season matchups. A two-day break separates the Rams’ victory from their next matchup, with tipoff being 2 p.m. on Saturday.