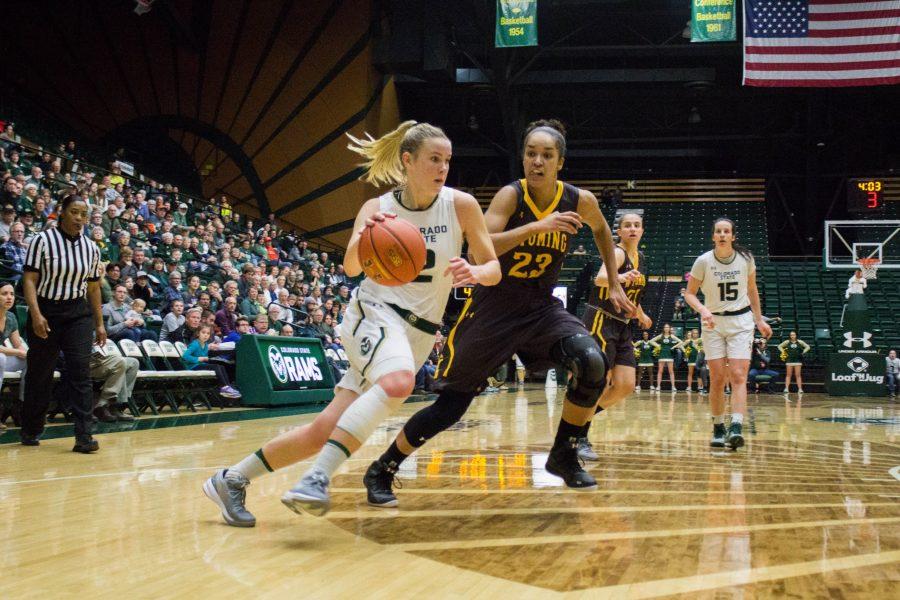 Stine Austgulen sprints around a Wyoming player during the Border War game at Moby Arena on Jan. 13. (Ashley Potts | Collegian)

The Colorado State women’s basketball team (12-6, 4-3 Mountain West) is tied for fourth place in the MW, unfamiliar territory for the four-time defending conference champions through a third of the league schedule.

With 11 games remaining and a logjam in the middle of the conference standings, the Rams have plenty of time to make a run at another regular season conference title. But they will have to overcome a crop of contenders consisting of Fresno State, New Mexico, Boise State, UNLV and Wyoming.

After losing at San Diego State to open the conference slate, Wyoming has rattled off four consecutive wins to claim a share of first place in the Mountain West with UNLV. Behind only the Rams, no one has given up fewer points than Wyoming in MW play.

The Rams and Cowgirls are neck-and-neck in defensive efficiency, having allowed nearly seven fewer points per game than any other team in the league. When the two defensive stalwarts matched up at Moby last Saturday, it was the Cowgirls who pulled out a four-point win in the low-scoring ballgame. CSU will have one more chance to gain ground on their Border War counterparts when the two sides meet again in Laramie on Jan. 31.

Before the Rams can focus on the rematch in Laramie, they have another test with the best set for Saturday afternoon at UNLV. Picked to finish fifth before the season, the Rebels have hushed doubters with four consecutive wins after an opening-night loss at Boise State. While producing 67.8 points per game and allowing just over 61, the Rebels have generated the best offense-to-defense efficiency margin in league play.

Though the league leading Cowgirls and Rebels have never won a Mountain West title, each collected a handful of first place votes before the season. Boise State topped those preseason projections with seven first place votes, but the reigning Mountain West tournament champions currently sit a game behind the league leaders and a game ahead of the Rams in third place.

Featuring preseason All-Mountain West forward selection and nightly double-double threat Shalen Shaw, the Broncos average over 70 points a game. Against most sides, anything over 70 points should get the job done, but not when matched up against New Mexico. The Lobos are 4-3 in the league, but their 83.9 points per game average is more than 12 points higher than any team in the conference.

Although Lobo guard Cherise Beynon opened the season as the projected player of the year, sophomore Jaisa Nunn has averaged 15.4 points and 10.4 rebounds per game to pace the league’s most efficient offense. With New Mexico alone atop of the league in offensive efficiency, the Rams’ 53.7 points per conference game is four fewer points than any team in the league.

A top defense juxtaposed against a tepid offense has made gaining ground in the standings difficult for the defending conference champions, but the Rams have found a glimmer of offensive stability in redshirt freshman guard Grace Colaivalu.

Colaivalu’s 16.5 points per conference game lead the Rams and are good for ninth in the league. League coaches and select media voted New Mexico point guard N’dea Flye as the projected freshman of the year before the season, but Colaivalu could run away with the hardware if she keeps up her torrid pace.

Along with Colaivalu, CSU guard Stine Austgulen has positioned herself among the league leaders in three-point efficiency with 2.3 makes per game for a share of sixth place in the Mountain West. With Colaivalu and Austgulen providing consistency on the offensive side of the floor, only New Mexico has taken down more defensive rebounds than CSU’s 28.4 per game. The Rams also lead the conference in field goal defense, limiting all opponents to just a .342 mark.

Consistency on both sides of the ball will be the key for CSU to not only return to their familiar place atop the conference standings, but also to stay in the top half of the standings. Though the Rams are within striking distance of the conference leaders, only one game separates them from eighth place San Jose State.

The Rams will look to generate some breathing room in the tight Mountain West standings when conference play resumes with a 2 P.M. MT tip on Saturday at UNLV.