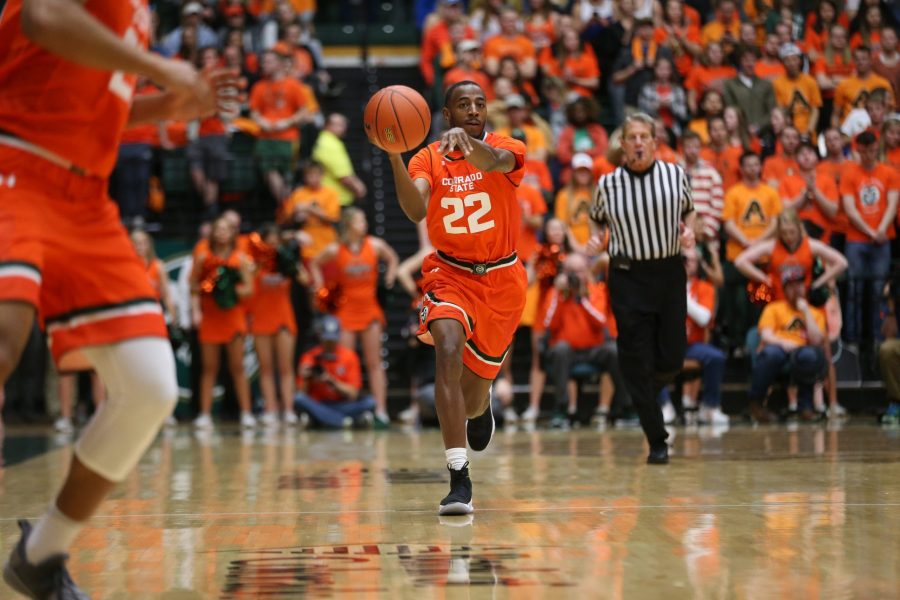 Junior guard J.D. Paige moves the ball up the court and passes to an open teammate during the first half of play against the UNLV Rebels on Jan. 20 at Moby Arena. The Rams fell to the Rebels 79-74. The Rams are now 10-11 on the season. (Elliott Jerge | Collegian)

For the second game in a row, Colorado State watched a late lead slip away in a 79-74 defeat at the hands of the UNLV Rebels Saturday afternoon.

Leading by nine with just over three minutes to play, CSU (10-11, 3-5 Mountain West) looked in prime position to pull away with the victory. UNLV (14-5, 3-3 MW) had other thoughts, though, as they embarked on a 14-0 run highlighted by Jovan Mooring’s 3-pointer with 29 seconds left to take the late lead.

After a timeout from coach Larry Eustachy, the Rams failed to conjure up a successful play, settling for a 3-point attempt from Nico Carvacho. The Rebels secured the rebound, and with it a come-from-behind victory in Fort Collins.

“We just didn’t execute the game plan. We did it for 36 minutes and then the last 4 minutes we got away from it … They scored 14 points in those last 3 minutes. That can’t happen.”

“We just didn’t execute the game plan,” guard J.D. Paige said. “We did it for 36 minutes and then the last 4 minutes we got away from it … They scored 14 points in those last 3 minutes. That can’t happen.”

The feeling for CSU is all too familiar as the Rams lost an eight-point lead in the final minutes against Air Force on Wednesday. With the loss, CSU remains winless at home in conference play after going undefeated in Moby Arena during the non-conference portion. Something that has affected CSU throughout the season, a lack of veteran leadership proved too much to overcome during UNLV’s 14-0 run.

To make matters worse, CSU did not have leading scorer Prentiss Nixon and his ability to finish off a team. Rather than turn to the touted scorer, CSU found itself without a closer on the final possession of the game.

“(Nixon) is our leader, we feed off him,” coach Larry Eustachy said. “I thought Nico (Carvacho) did a good job of stepping up and trying to fill that role, I thought Raquan (Mitchell) did, I thought Deion (James) did. But that’s a big part of the game, you need somebody like Prentiss.”

Playing in front of a bevy of professional scouts here to see the main attraction, UNLV’s NBA-bound center Brandon McCoy, the Rams kept the big man in check for much of the game. Despite their success on McCoy, forward Shakur Juiston carved his way through the Rams’ defense early, en route to a 14-point first half in which he made all seven attempts from the field.

After Anthony Bonner picked up two early fouls and found himself on the bench for the final 12 minutes of the first half, sophomore guard Raquan Mitchell shined. The athletic specimen proved he can be an integral part of the team, ultimately finishing with 17 points and seven rebounds in the contest.

With Bonner and fellow starter Che Bob in foul trouble, Mitchell and Paige combined to score 19 points in the first half. Despite allowing the Rebels to shoot 48 percent from the floor, CSU tied things up at 36 going into halftime.

UNLV, home to the conference’s top two rebounders in McCoy and Juiston, entered Moby with a significant height advantage, boasting three players at least 6 feet 11 inches tall. Despite the disadvantage down low, CSU made an effort to attack the glass throughout the second half. In doing so, the Rams outscored the Rebels 38-28 in the paint to begin mounting their lead.

Mitchell nailed a 3-pointer and converted an and-1 on the next possession to invigorate an orange-clad Moby Arena and give CSU a two-possession lead. The Rams built the lead up to nine with 3:23 to play before UNLV clawed its way back to victory.

“The team really did a good job of buying into controlling the tempo, slowing it down, getting the ball reversed, and trying to get the ball in the post,” Eustachy said. “We really were good at that, and that’s what got us up by nine. And then some careless mistakes were deadly.”

Playing without Nixon and his 17.9 points per game, the Rams’ offense distributed the scoring in an impressive manner. Paige and Mitchell led CSU with 19 and 17 points, respectively. Deion James (14) and Che Bob (12) joined the Rams in double digits. Carvacho recorded 16 rebounds, his fifth consecutive game with 10-plus boards, and limited McCoy to nine points for UNLV.

Juiston finished with 19 points on 9-of-12 shooting. Mooring capped his 17-point performance with the game-winning 3-pointer.