CSU loses to Wyoming in double overtime during ongoing investigation 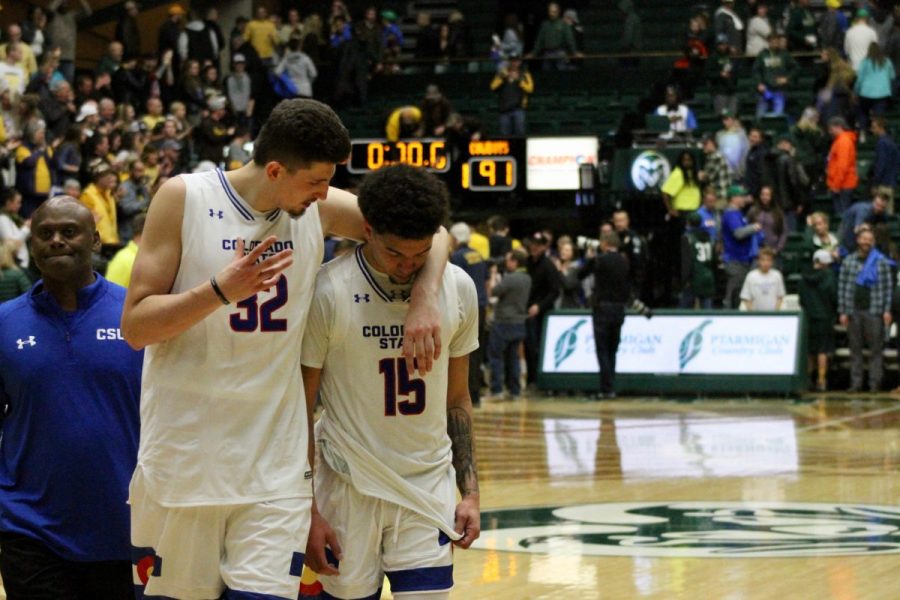 Nico Carvacho consoles Anthony Bonner after a 2OT loss to Wyoming. The Rams lead early on in the game, but gave way to a Cowboys team who evened the Border War series. They beat the Rams at home during their State Pride game. (Joe Oakman | Collegian)

The narrative has become all too familiar for the Rams in the last two weeks: mount an early lead, and lose it. Leading by 13 with 4:36 to play, the game seemed all but over. Just like the Air Force game on Jan. 17; just like the UNLV game on Jan. 20.

And just as they were unable to do in those late-game losses, the Rams failed to slow down Wyoming in the final five minutes of the contest. The Cowboys began their comeback with the 3-point shot, something that has hindered CSU during its five-game losing streak. Justin James made a pair of 3s to bring the game within reach.

Three more triples from Hayden Dalton, Alexander Aka Gorski and, with 12 seconds left in regulation, Nyaires Redding sent the game into overtime.

“I thought we were there a lot, a lot of contested shots, I mean (Wyoming) banked one in,” coach Larry Eustachy said. “I think that’s the best we played all year, we played well enough to win.”

In the first overtime period, neither team extended its lead beyond two points. Following a defensive stop, CSU had an opportunity to win it on the final possession of the game. Anthony Bonner handled the ball above the arc, drove passed his defender and released a floater near the free throw line. The shot rattled around the rim before bouncing out.

Wyoming controlled the second overtime after gaining a lead from a Dalton 3-pointer. The Cowboys held off a late comeback by draining free throws to finish the Rams and split the season series. With the loss, CSU remains winless at home in conference play as they look to break free from a five-game losing streak.

“It’s been a tough couple losses, especially at home with the ones we were up all the time and then they come back,” forward Deion James said. “At the end of the day, with any bad experience, you’ve just got to learn from it. That’s what we’re gonna do.”

Looking to snap a four-game losing skid and pick up its first home win in conference action, CSU entered the game with added motivation, and it showed early. After surrendering the first bucket of the game, the Rams embarked on a 15-0 run to take a commanding lead through the first six minutes of the first half.

At the ten-minute mark of the half, CSU extended its lead to 14 following a pair of 3-pointers from James and Bonner.

The script turned sour for the remainder of the half, though. Open shots that Wyoming failed to connect on in the opening portion of the half began to drop. Meanwhile, CSU went cold from the field, missing its proceeding eight attempts.

Wyoming’s Alan Herndon executed an and-1 layup with four seconds remaining in the half to give Wyoming its first lead since the opening seconds of the game and take a 32-30 advantage into the break.

Just like the first half, though, CSU opened the final 20 minutes of play with tremendous energy. Che Bob immediately negated the deficit with a 3-pointer on the first possession and by the midway point of the half, the Rams extended the lead to double digits.

The lead came in large part to their own success from the 3-point line. After shooting a respectable 38 percent from deep in the first half, CSU connected on 55 percent of its 3s to build the lead. The defense clicked as Wyoming consistently turned the ball over and failed to convert from the field.

As the game seemed to creep out of reach, the Rams’ late-game struggles from games’ past became evident. Avoidable miscues on offense hindered the Rams late as they were unable to finish off their northern rivals.

“I take part blame, quick shots from me,” Bonner said. “I think at the end of the game we let the press beat us up…That carried into overtime just getting sped up and not being patient.”

When asked about the ongoing investigation into his conduct, Eustachy said he was unable to comment on the situation.

James led CSU with 24 points and 14 rebounds. Bonner followed with 18 points while Nico Carvacho notched a double-double with 10 points and 13 rebounds.

The Rams are back in action Saturday against the league-leading Nevada Wolfpack. CSU hosts Nevada at 6 p.m. in Moby Arena. The game will be broadcast on either ESPNU or ESPN3.