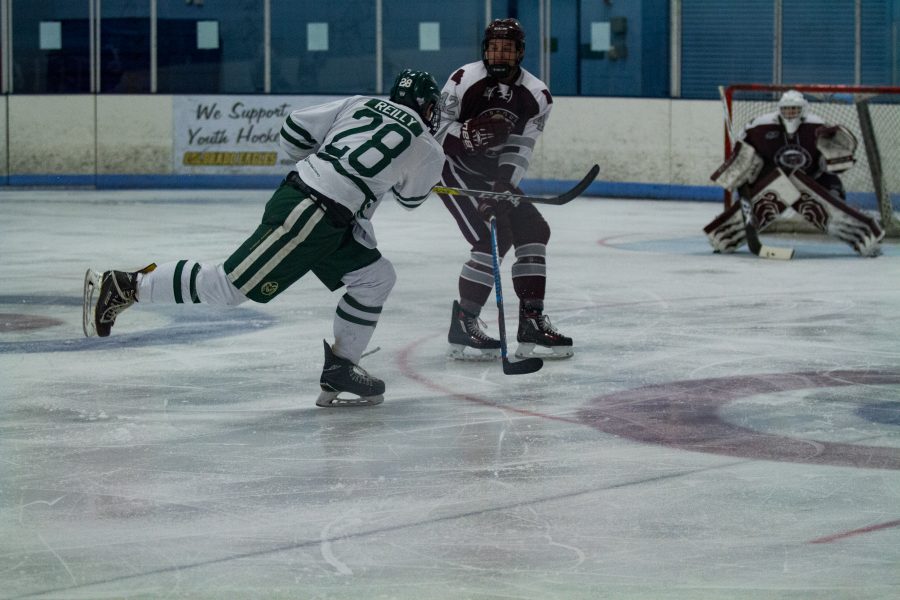 Forward Kyle Reilly (28) takes a shot on the Missouri State game on Saturday, Jan. 20, 2018. During the game, Reilly was credited with an assist on CSU's one goal. (Josh Schroeder | Collegian)

After a long break, the Colorado State men’s Division I club hockey team took the ice again for three home games last weekend. The Rams knocked off Arkansas in the first game of the weekend before dropping two games against the top 20 Missouri State Ice Bears.

Coming into the game, the Rams held the No. 29 seed in the American Collegiate Hockey Association rankings. Arkansas came in as a slight underdog ranked No. 34. CSU started the first period strong and never looked back. A goal from Corey Taylor on the assist from Alec Orme gave the Rams a 1-0 lead with 4:26 left in the first, a lead they would hold for the remainder of the period.

Another goal from Blake Davies gave the Rams a comfortable 2-0 lead in the second period before CSU’s Liam Miller added another goal to pad the cushion. Arkansas netted two of their own goals late in the competition to put pressure on the Rams, but CSU held on for the 3-2 victory over the Razorbacks.

I was very pleased with our game on Thursday night against Arkansas. We had a great start and were able to carry that through the rest of the game.  We played a very complete game and got contributions from everyone, including some guys who made the most of their opportunity to play.

“I was very pleased with our game on Thursday night against Arkansas,” CSU head coach Jeff Degree said. “We had a great start and were able to carry that through the rest of the game.  We played a very complete game and got contributions from everyone, including some guys who made the most of their opportunity to play.”

CSU’s next games were against a tough Missouri State team that came in to the game ranked No. 19 by the ACHA.

CSU got on the board with a goal from Austin Ansay, but any hopes of a comeback were squashed as Missouri State went on to score three more goals to end the game with a 6-1 clobbering of the Rams.

“Friday’s game with Missouri State was a strange one,” Degree said. “There were 22 minor penalties called and it was difficult to get into the flow of the game.  They have some skilled players who were able to exploit the extra time and space on the ice due to all the penalties.”

The Rams looked to turn things around in their final matchup of the weekend as they got another chance to take down the Ice Bears. Missouri State started the third game strongly as well, scoring a goal within 10 minutes to give themselves a 1-0 lead. CSU responded with a goal from CJ Nitchen to tie the game at the end of the period.

Despite the quick answer, Arkansas scored four more goals throughout the game to finish off the Rams with a 5-1 victory.

“Although the score might not reflect it, we played a much stronger, much more disciplined game,” Degree said.

Collegian sports reporter Evan Grant can be reached by email at sports@collegian.com or on Twitter @EGrantSports.