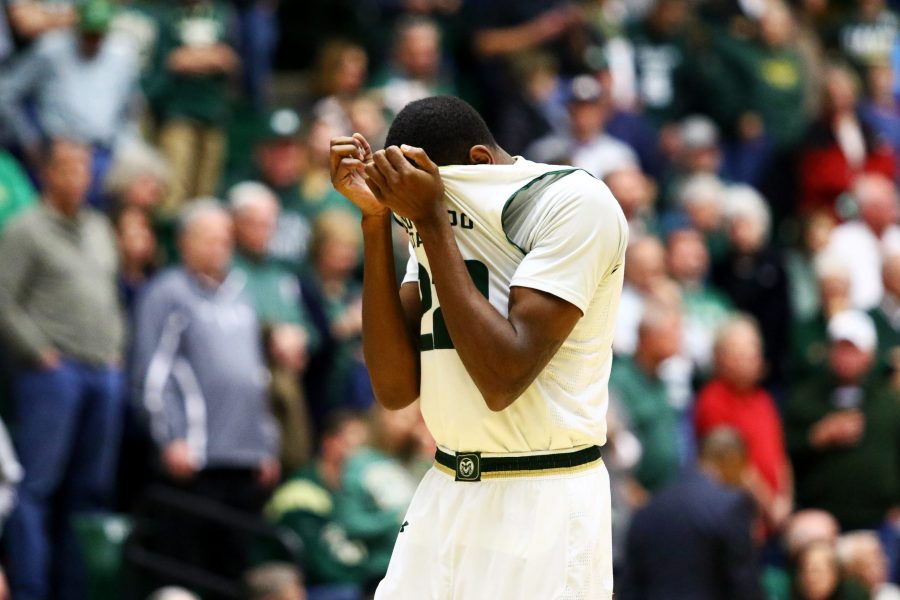 Junior guard J.D. Paige buries his face in his jersey in frustration on Jan. 6. The Rams were defeated by the Bulldogs in overtime. (Javon Harris | Collegian).

The Bulldogs came out of the locker room looking like one of the most dangerous teams in the Mountain West, jumping out to an early double-digit lead over Colorado State. Then the Rams came storming back, using a 14-0 run to begin the second half and eventually send the game to overtime.

Despite being on the road, the Bulldogs looked like they owned the joint early, as they simply could not be slowed down in the first half. Fresno State opened the first 20 minutes by shooting 52 percent from the field and 50 percent from beyond the arc, taking a comfortable 39-33 lead into the break.

A large reason Fresno State saw so much success was due to red-hot shooting performances from Deshon and Jahmel Taylor.

Each guard was able to do whatever he wanted, hitting a variety of difficult shots and producing over 50 percent of the team’s offense. Deshon Taylor was particularly impressive in the first half, totaling 13 points and going 5-of-8 from the field. Jahmel Taylor was equally productive for the Bulldogs though, contributing eight points and going 3-of-4 from 3-point range. In total, Deshon Taylor finished with 22 points and Jahmel Taylor totaled 13 points as well.

Trying to match Fresno State’s offensive pace, Colorado State consistently found itself shooting low percentage perimeter shots in the early stages of the game. While the Rams were able to knock down some of these shots, they were not able to produce at the same level as the Bulldogs.

Then with about one minute remaining in the first half, junior guard J.D. Paige sparked a 14-0 run for the Rams, hitting a pair of corner 3-point shots to conclude the first half and making another just seconds into the second. After leading by as much as 12, Fresno State now found themselves trailing 41-39.

That momentum ultimately carried the Rams through the remainder of the half as they outscored the Bulldogs by six in the second half and ultimately forced the game into overtime. The comeback magic would run out for head coach Larry Eustachy’s Rams though as the Bulldogs were able to come away with the tough overtime victory on the road.

Prentiss Nixon led the green and gold in scoring, finishing with 21 points in 38 minutes played. Nixon was able to log crucial minutes for an inexperienced Rams team, but the junior guard was limited due to a knee injury suffered against San Diego State Tuesday night.

Along with a strong performance from the veteran guard, redshirt sophomore forward Nico Carvacho owned the glass Saturday. The “Big Chile” led all players in rebounds with 18 and added 10 points to complete a double-double.

Following Saturday’s loss, the Rams will travel to Logan, Utah for a road matchup with Utah State. CSU recently picked up its first road victory of the year, defeating San Jose State on Dec. 30.