Razorbacks run the Rams off the floor Tuesday night 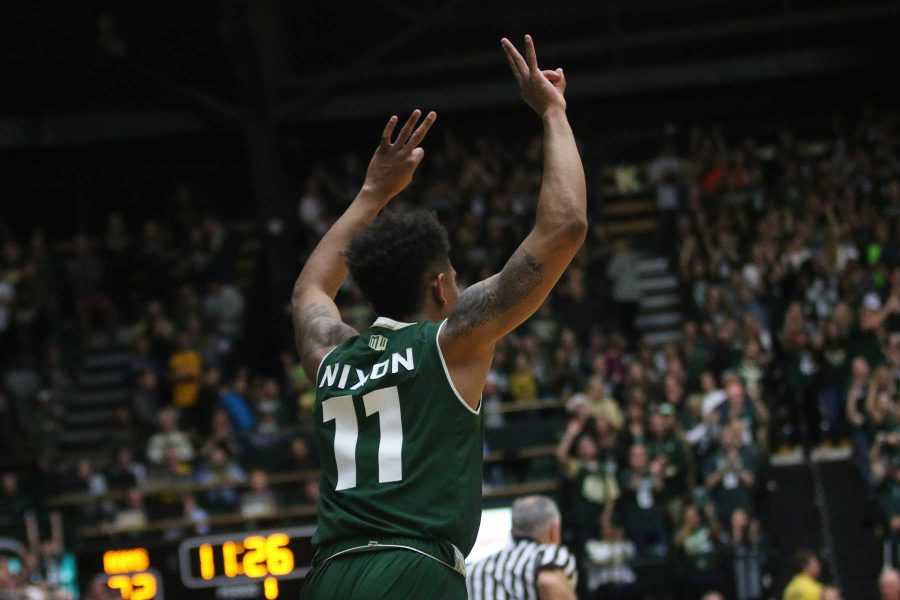 Junior guard Prentiss Nixon celebrates a huge 3-pointer in the first half of action against Wyoming in 2016-17. The Rams won the second Border Wars game 78-76. (Elliott Jerge | Collegian)

Colorado State men’s basketball looked to shock SEC country but the University of Arkansas proved to be too much for the Rams to handle Tuesday night. The Razorbacks defeated the Rams 92-66 in front of their home fans in Fayetteville, Arkansas.

CSU started the game on a 13-0 run, looking like a team that could pull of an upset-victory over the Hogs. Arkansas quickly erased those hopes by responding with a 21-0 run of their own, though.

Along with Jones, 6-foot-11 freshman forward Daniel Gafford  and senior guard Jaylen Barford had big nights as well. Gafford totalled 14 points and six rebounds against the Rams, while Barford finished with a season-high 19 points.

Nixon has now led the Rams in scoring in five of the seven games that he has played in. He missed the Northwestern State game on Nov. 24 with a concussion.

No other CSU players finished in double-digits but sophomore guard Raquan Mitchell made the plays of the night, throwing down a pair of vicious one-handed dunks in the game. Mitchell finished the night with eight points and five rebounds.

In his return to his old school, transfer-forward Lorenzo Jenkins had a poor shooting performance, missing his first four attempts.  Jenkins played in one game for the Razorbacks during the 2015-16 season, scoring three points and securing two rebounds in seven minutes against Northwestern State.

CSU failed to get much going on this end of the floor in general though, as turnovers plagued them throughout the contest. The Rams gave the ball away 18 times Tuesday and struggled to create any sort of rhythm.

After dominating the paint against Colorado last Saturday, the Rams held a 38-31 advantage on the glass over the Hogs. This was a lone bright spot in the game for head coach Larry Eustachy’s squad.

The loss to the Razorbacks makes CSU’s all-time record against the SEC 10-7. The Rams will hit the hardwood again on Friday for a Pac-12 matchup at Oregon (5-3).

The Ducks are coming off back-to-back losses to Oklahoma and Boise State. Prior to the buzzer-beater loss to the Broncos, Oregon held a 46-game home winning streak at Matthew Knight Arena.

The Rams and Ducks will tip off at 7 p.m. Friday and will be televised on the Pac-12 Network.