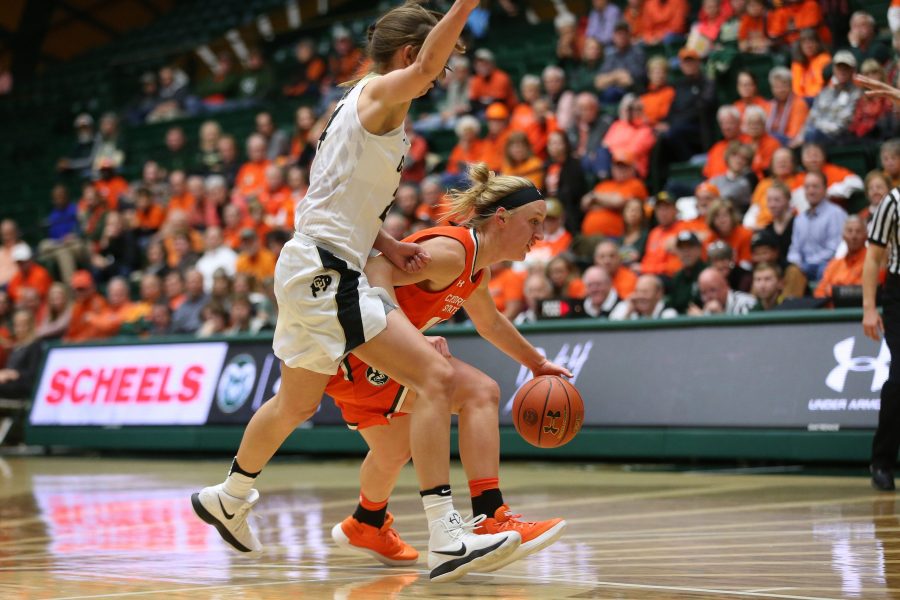 Redshirt Senior Guard Hannah Tvrdy drives to the hoop during the first quarter of play against the Colorado State Buffaloes on Dec. 6. The Rams fell in a hard fought battle 70-67 in Moby Arena. (Elliott Jerge | Collegian)

Colorado eked out a win versus the Colorado State women’s basketball team by a final score of 70-67 in front of an Orange Out crowd at Moby Arena Wednesday night.

Before turnovers plagued the Rams’ offense, senior Hannah Tvrdy and fellow guard Grace Colaivalu drove the paint for a pair of layups to put the Rams up 4-0 early. CSU then coughed the ball up on three of their next four possessions, opening the door for Colorado to build a 22-8 advantage late in the first quarter.

Redshirt freshman guard Jordyn Edwards cut the CU lead in half with the Rams’ first 3-pointer of the evening and Tvrdy netted her fourth point of the quarter to make it a 24-13 game. But when the whistle blew to end the first quarter, the Rams already committed 11 turnovers.

“It’s pretty sickening honestly, looking that we lost by three and especially the crazy stupid turnovers we had,” Tvrdy said. “If we limit at least five of those, you know you’re in it.”

Veronika Mirkovic set up Stine Austgulen with her first 3-pointer of the night, sparking an 11-0 CSU run. Austgulen capped the run with another trey to bring the Moby Arena crowd to their feet and put the Rams up 29-28.

The Rams and Buffaloes exchanged the lead for the remainder of the quarter before CU forward Annika Jank sunk a layup as time wound down in the first half with the Rams trailing 36-35.

“It’s good looking at how we can battle back, but I think (we need to) just not allow ourselves to get to that place,” Tvrdy said. “If we just limit those turnovers and get some easy stops, we don’t have to dig ourselves out.”

CSU held 2016 All-Pac 12 guard Kennedy Leonard to just eight points in the first half, but the junior doubled up her production in the third to lead the Buffaloes to a 25-point quarter and 61-48 advantage.

Colorado extended their lead to 15 points in the fourth quarter. However, thanks to the Rams’ stout defense and clutch shooting, CSU made the Buffaloes sweat out their fourth straight win over the Rams.

“They went the last nine minutes without a field goal. They only had six baskets in the first half against our half-court defense,” Williams said. “It doesn’t take a genius to figure out that they’re very guardable and we guarded them when we should’ve.”

The Rams eventually made it a one-point game after Callie Kaiser hit a wide-open three from the corner with 14 seconds to play. Leonard sunk both free throws on the ensuing possession to regain the three-point lead. With time winding down, Grace Coloaivalu found herself with a look to tie the game, but the ball rimmed out as the buzzer sounded and the Buffaloes went back to Boulder with a 70-67 win.

“We did some good things late game,” Williams said. “You’re just going to look at that first quarter and that third quarter where we were just not very tough with the basketball.”

The Rams head to Greeley on Saturday for another in-state matchup with Northern Colorado at 2 p.m.