Rams defeat Michigan for second time in 2017, advance to second round of NCAA tournament 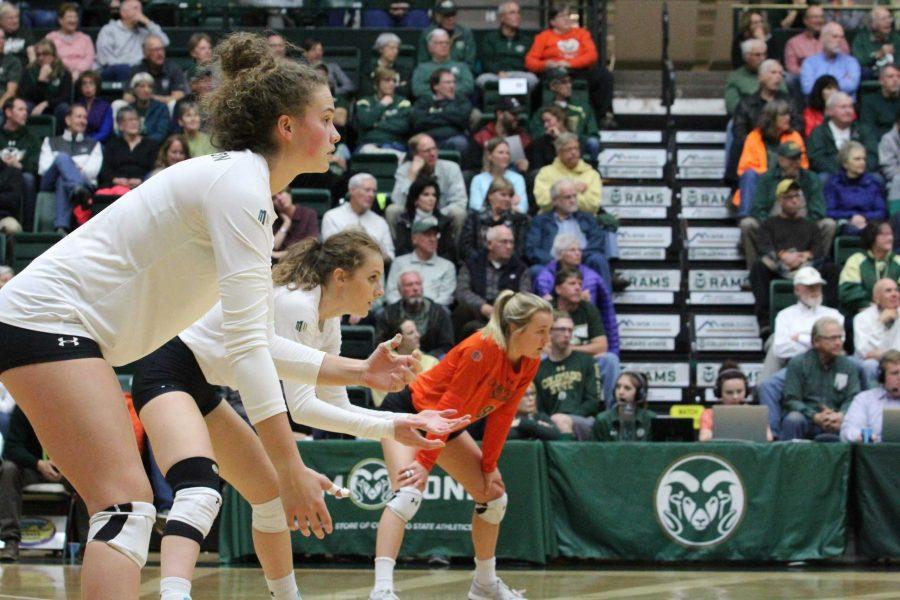 PALO ALTO, California – For the first time since 2014, No. 23 Colorado State volleyball will be heading to the second round of the NCAA tournament. The Rams defeated Michigan in four sets during the opening round Friday night (25-23, 23-25, 25-22, 26-24). CSU quadrupled their block total from their first match against Michigan earlier this year, stuffing the Wolverines 16 times in the match Friday.

The opening set looked quite a bit like the two teams first match back on Sept. 8 when the Rams swept Michigan at home. CSU lead almost the entire way with only one tie score in the first set.

“It was us capitalizing on tempo and taking the right kind of swings,” head coach Tom Hilbert said. “Our whole goal going into this was we want aggressive swings in all situations.”

The rest of the match proved to be a battle, especially the fourth set. Michigan led late in the set (24-21) and was looking to send it to a deciding fifth set. Sophomore setter Katie Oleksak started the Rams’ rally with a kill though, and then redshirt sophomore Kirstie Hillyer put it away.

The 6-foot-7 middle blocker aided on back-to-back blocks for the Rams, who then tied the score at 24 all after the second stuff. Hillyer did not play in the first against Michigan due to a knee injury that sidelined her for the Rams’ last six non-conference matches of the season.

“I was beyond excited,” Hillyer said on getting a rematch with Michigan. “When we found out were playing Michigan and Tom (Hilbert) was talking about it he goes ‘they haven’t seen the wrath of Stie yet.’”

A kill by senior Jasmine Hanna and an error from Michigan closed out the 5-0 run for the Rams, who ultimately took the match in four sets.

All night the Rams attacking threat had success. Five different players finished with nine kills or more, none more than Hanna and Hillyer, who had 13 each. Sophomore Paulina Hougaard-Jensen also carried her breakout season into the first round by leading the Rams in block assists with eight.

The efficiency shown by the Rams came primarily from the senior outside hitter duo of Sanja Cizmic and Hanna who combined for 22 kills and only two errors between them. The Rams leader in kills, redshirt freshman Breana Runnels, struggled a bit with seven attacking errors on her 36 swings for a .139 hitting clip.

“I know they are going to have a successful tournament cause it’s their last time playing and we saw that tonight when they played really well,” Oleksak said on the seniors performance.

Once again, Michigan’s Claire Kieffer-Wright had success against the Rams, throwing out a 13 kill performance off of a .480 hitting mark. The Wolverines hit very well in the first three sets by having a .273 clip or higher in each, but the Rams were able to turn that around in the fourth by holding them to .089.

“I think we are the same athleticism as a Big Ten team like Michigan, but we aren’t so good that we can disrupt them offensively the way we do Mountain West teams,” Hilbert said. “It means we have to keep our offense at an equivalent level.”

Up next for the Rams will be the winner of the host Stanford vs. California State University, Bakersfield. With Stanford being heavy favorites, Hilbert believes that even though his team will be outmatched physically, the fire they showed against Michigan can aid them in a potential upset.

“We’re gonna have to play with the same intensity and we got to maximize our athleticism,” Hilbert said. “But they are not infallible. If we play with energy and intensity and side out well and get it to an end of a set were we’re close, we can win it.”

The second round matchup will begin at 7 p.m. MT Saturday where the winner will advance to the Sweet Sixteen and face the winner of the Wisconsin regional next weekend.